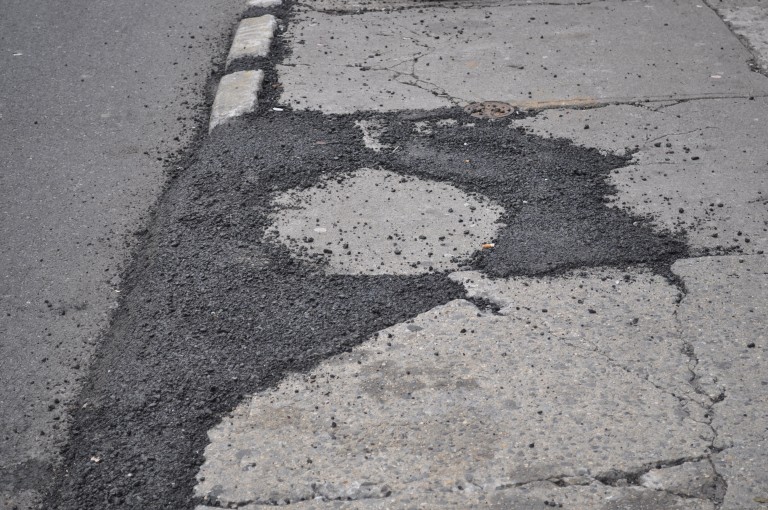 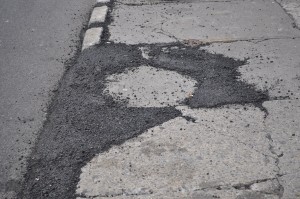 After three 311 calls, residents had no success getting this curb in Maspeth fixed. The day after a call from The Forum, the Department of Transportation sent an inspector to patch it.

When 81-year-old Eleanor Polgar was getting off the Q59 bus on Grand Avenue in Maspeth she stepped onto a
sidewalk where several feet of curb was missing and inches-wide holes were torn out of it.

“She almost fell in there. You get off the bus, the bus doors open and it’s right there,” her son, Richard Polgar said. “My
mother almost broke her leg in there.”

This was in 2010. Until last week, that sidewalk and curb sat unpatched despite multiple complaints to 311 and the Department of Transportation (DOT), Polgar said.

Hoping to find answers somewhere last week, Polgar reached out to The Forum.

The DOT did not immediately have a response about the curb when asked by The Forum on Feb. 8, but the next day, the DOT sent out a crew to patch the curb with asphalt.

When asked again about the curb this week, a spokesperson said the DOT sent an inspector to make temporary repairs
on Feb. 9.

The curb is at on Grand Ave. between 71st and 72nd streets in a Maspeth business district, and in this case, the property owner got a violation notice in 2009. 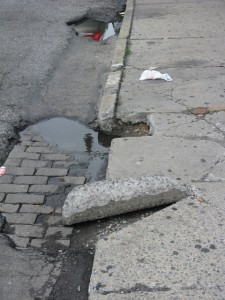 This photo, taken in June, 2011, shows a curb in Maspeth that sat broken and unpatched since 2009.

The DOT did not respond to further questions about why the sidewalk wasn’t patched soon after the 2009 violation was issued.

Polgar lives a few blocks from the intersection and originally complained on Nov. 7, 2010, right after his mother’s run-in
with the hazard. He mentioned the curb had been that way for months.

“It was obviously a hazard and nobody was addressing it,” he said. “What does it take?”

After seeing zero improvement, he once again called 311 and logged a complaint with the DOT on June 14, 2011.

“Twice they said it was the property owner’s responsibility to maintain sidewalks, and that’s all they said,” Polgar said.

The spokeswoman did not comment on the 311 calls but said safety is a top concern of the DOT.

Online records from 311 show there was a third complaint about the broken curb on March 16, 2011 as well as two
complaints in 2011 about a pothole at the location.

Polgar said the patched-up curb is better than nothing.