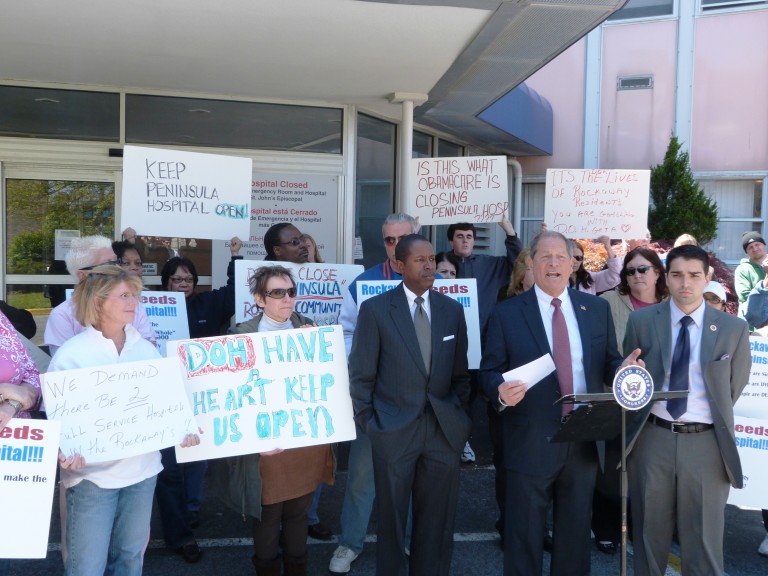 Residents and legislators finally had the opportunity to ask Department of Health (DOH) officials questions on the closure of Peninsula Hospital last week at a panel discussion.

The panel, which was held at the Knights of Columbus in Rockaway Beach, was scheduled last month after city Councilman Eric Ulrich (R-Ozone Park) and U.S. Congressman Bob Turner (NY-09) called for a meeting with DOH Commissioner Nirav Shah to discuss the April 9 shutdown of the former Far Rockaway-based hospital.

State Sen. Shirley Huntley, who spoke at the meeting, spoke out against the closure of the hospital, adding that she had recently met with Gov. Andrew Cuomo to discuss the closure of Peninsula Hospital.

Huntley pointed to Peninsula’s shutdown as a bad sign, citing the closure of other Queens hospitals in past years.

“We lost three hospitals in Queens. Now we’re losing this one, that’s four. Other hospitals survive, why? Because the state has money to do whatever the hell they want to do,” she said.

Afterwards, Huntley pledged to continue to fight in order to bring a hospital back to the area.

“We’re not just going to let this go away. We are going to open this hospital,” she said.

Turner, who spoke at the meeting, said he was “deeply disturbed” by the shutdown of the hospital.

Noting that the community had banded together in a loud voice to protest the move, Turner reminded DOH officials that Peninsula’s absence meant that St. John’s Episcopal Hospital is showing signs of strain.

According to Turner, numerous reports have surfaced recently of people requiring emergency care being diverted from St. John’s due to lack of capacity.

“Those who are turned away now face a 25 to 30 minute ambulance ride to the nearest hospital under low traffic conditions,” said Turner. “In an emergency situation, these extra minutes may well be the determining factor between life and death. This situation has created a health care crisis in the Rockaways that will continue to afflict our community until a satisfactory solution is reached.

“In making their decision to close the hospital, the Department of Health provided little advance warning of their intentions, and did not consider residents’ concerns,” added Turner. “In doing so, they did not exhibit the transparency we deserve on an issue of such monumental importance to this community.

Furthermore, the DOH seems to have utterly failed to plan for alternative means of addressing the very real crisis Peninsula’s closure has created in the Rockaways. This has left us desperately short of life saving medical care, in a community whose population and health care needs are only growing with time.”

State Sen. Malcolm Smith (D-Rockaways) cited the growth around the area, including new trains, a new YMCA and a brand new school, as a reason the need for a hospital was even greater than ever before.

“The concern for me is that when you close the door for Peninsula, you’re opening the door of death for the Rockaways,” he said at the meeting.

Smith also asked Shah why the attempts to fix the deficiencies in the hospital’s lab and finding a new investor to pay for the hospital were ignored before the state closed the hospital last month.

“Every time there was a solution that we were asked to come up with, and we would come up with the solution, there was always a ‘no,” he said. “That’s why you have the public here saying that there was a preconceived notion to close this hospital.”

Ulrich, a vocal opponent of the hospital’s closing who was in attendance at the meeting, posted this comment on his Twitter page reflecting his views on the matter: “Peninsula Hospital must re-open! The health & safety of every Rockaway resident will be in jeopardy if they close their doors for good.”

The DOH is scheduled to release a report later this summer—approximately 60 days from the May 10 meeting, possibly in the first week of July—that will answer public questions and comments from the meeting, according to a statement on the DOH’s website.