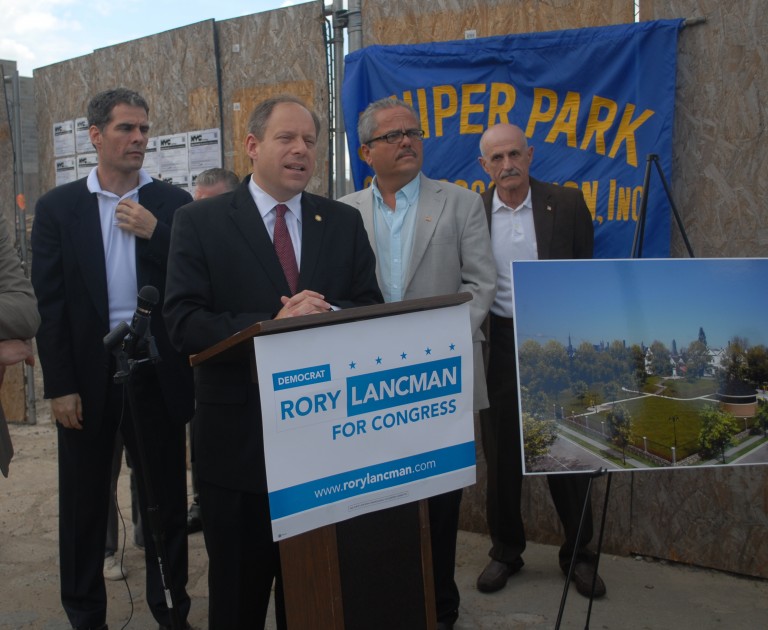 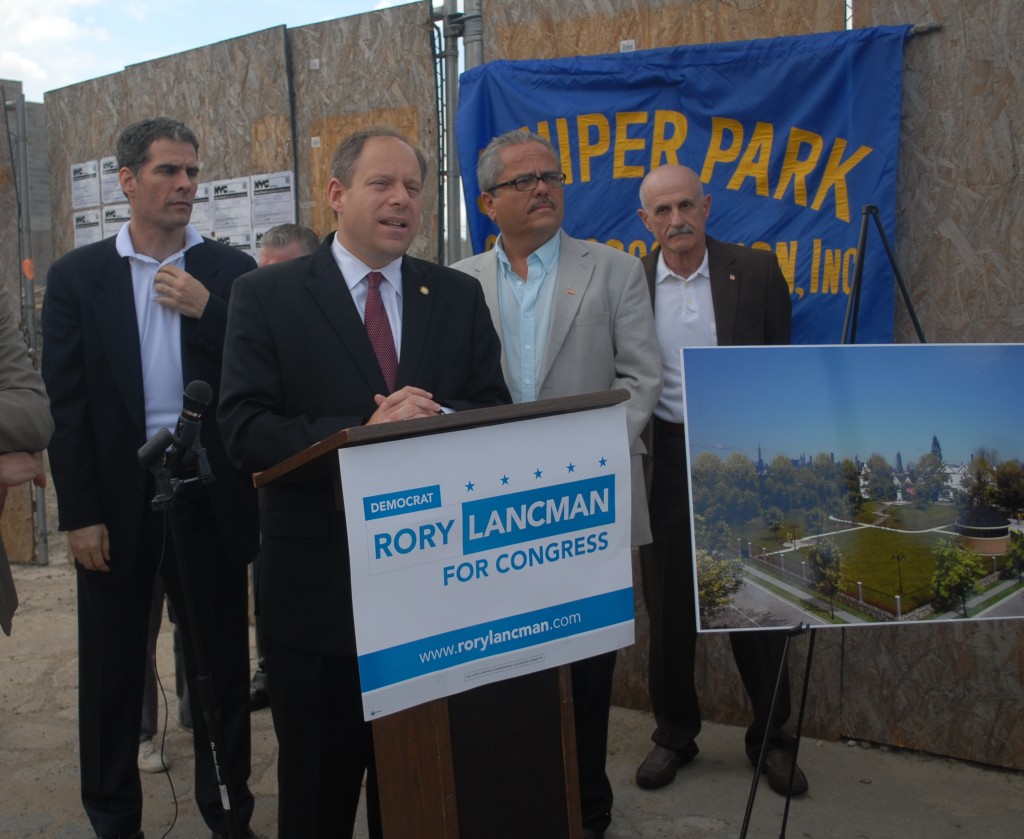 Flanked by parkland advocates and a rendering of a new park, Assemblyman Rory Lancman calls for the use of eminent domain to reclaim a mostly empty commercial lot for open space in Maspeth. Forum Newsgroup photo by Jeremiah Dobruck.

Assemblyman Rory Lancman stepped into the City Council district of one of his rivals Thursday to advocate the use of eminent domain to buy the former St. Saviour’s Church property in Maspeth.

For more than five years, neighbors and parkland advocates have lobbied the city to turn the boarded-up property into parkland. It’s currently a dirt lot with a warehouse tucked in a corner.

Last week, Lancman and a few backers took the chance to criticize Councilwoman Elizabeth Crowley and the Department of Parks and Recreation saying they have failed to serve the neighborhood’s needs.

“What we’re looking at behind us is not just an eyesore and a terrible waste of resources, but a physical representation of a monumental failure on the part of government to take care of the needs of this community,” Lancman said, standing in front of plywood fencing surrounding the 1.5-acre lot.

Lancman is competing in a Democratic primary for the 6th District congressional seat against Crowley and Assemblywoman Grace Meng.
For the past few years, the owner of the property was unwilling tosell the land despite the $3.5 million dedicated to the prospect from Crowley and Queens Borough President Helen Marshall.

When Crowley pulled her portion of that funding and the Parks Department dropped its bid for the plan in November, some activists were furious.

Lancman cashed in on that sore spot by calling the press conference Thursday.

“The long and short of it is there was a window of opportunity when the city could have purchased this property and turned it into a park,” Lancman said. “And through a series of mistakes and omissions and just bad judgment the city failed to do so.”

Mirroring the call of about eight parks advocates and neighbors behind him, Lancman said acquiring this parkland would be a textbook case in which to use eminent domain despite its abuses elsewhere.

He pledged he would use the political leverage available to him to influence the city’s hand if he’s elected to Congress.

He also said he wouldn’t rule out using eminent domain on a federal level to claim the area as United States parkland.

“Let’s be clear that this community desperately needs more park space, and that’s not just the subjective feeling of people who live in the neighborhood,” he said.

The land had long been the site of the historic St. Saviour’s Church, built in the 1800s, but after a failed fight to landmark the building, the lot was sold to a developer in 2005.

Since then, the building was disassembled and, stored in trailers and the fight began to reclaim the land.

Activists like Geoffrey Croft, president of New York City Park Advocates, have called for the use of eminent domain since negotiations with the property owner fell through.

“We have to get this land back. We feel very strongly that the Bloomberg administration needs to step up as well,” said Croft. “We need to start renegotiating. The Parks Department needs to go back to the drawing table. And I agree, the failure of the local councilwoman to embrace this is not helpful, to say the least, to this community.”

Other advocates standing with Lancman had stronger words for Crowley.

“The thing that angers me as I stand here is that last year in May, Elizabeth Crowley, our councilwoman, stood here and pledged her total support for St. Saviour’s and getting the church rebuilt here and all sorts of promises and then she disappeared,” said Lorraine Sciulli, vice president of the Juniper Park Civic Association, which saved the church and has been locked in a feud with the councilwoman.

Crowley has maintained that she still supports the effort to reclaim the parkland but has stood against the idea of eminent domain—shifting her focus to buying parkland at other sites, which so far have not come to fruition either.

“Even if eminent domain was used, we always believed that the price would skyrocket,” Eric Yun, a spokesman for the Crowley campaign, said. “It wasn’t the best use of funds.”