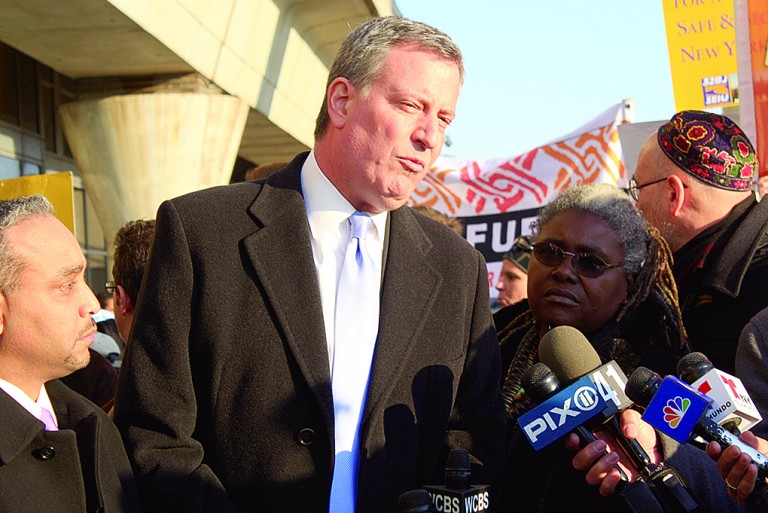 Bill de Blasio says the city is not doing enough to remedy problems with the food stamp program intended to assist those devastated by Hurricane Sandy.

In a Dec. 13 letter to HRA Commissioner Robert Doar, de Blasio, a likely candidate for mayor, said the City’s Disaster Supplemental Nutrition Assistance Program (D-SNAP) is lagging in several key areas. According to de Blasio, not enough residents have been made aware of D-SNAP—the food stamp program designed to help those living in Sandy-ravaged areas—and a lack of a Queens in-take center means those who do know about the program must travel to 495 Clermont Ave. in Brooklyn, a round-trip journey that by public transit could several hours from the Rockaway Peninsula.

Applications needed to have been made in person. If approved, applicants could receive a onetime benefit equal to the maximum monthly regular SNAP benefit for the household’s size ($526 for a family of three). Besides Brooklyn, there is a D-SNAP center in Staten Island.

With D-SNAP applications due on Dec. 18, the City only accepted applications for a one week period. Individuals living within 12 zip codes could apply, though de Blasio argued the number of zip codes should have been far greater.

“You could not engineer a more difficult system to use,” de Blasio said. “People don’t seek out food stamps on a whim—they do it because their families are in dire need. These bureaucratic hurdles are keeping New Yorkers hard-hit by Sandy from putting food on the table.

We have to expand aid to everyone who needs it and make it simpler to get help.”

HRA did not respond to a request for comment as of press time. At the time of the announcement, HRA Commissioner Robert Doar in a statement hailed the D-SNAP initiative, which could not be granted to those already receiving food stamps, as a way to immediately relieve those most hard-hit by the storm.

“By providing this additional supplement to families in need, New York City is showing once again that we are doing all we can to respond to the needs of New Yorkers in the wake of the storm,” Doar said on Dec. 7. “D-SNAP will help the hardest hit get back on their feet and feed their families as they rebuild homes and businesses.”

The New York Times on Dec. 16 editorialized that the Dec. 18 D-SNAP deadline was “too soon,” arguing that the food stamps could have been “easily dispense these stamps from relief centers that already exist in those parts of the city.”

“There were other management decisions that seem miserly,” the Times wrote. “The city elected to send aid to areas it thought were hardest hit, but that inevitably shortchanged many needy people in other areas affected by the storm.”

Joel Berg, executive director of the NYC Coalition Against Hunger, was particularly outraged at the perceived limited scope of the D-SNAP program.

“It’s unfortunate when in normal times, New Yorkers are going hungry as the City places road blocks in the way of families needing federal nutrition assistance,” Berg said. “But it is particularly outrageous for this to happen following the worst natural disaster in modern times.

These roadblocks are harmful to both hungry families and the city’s economy.”