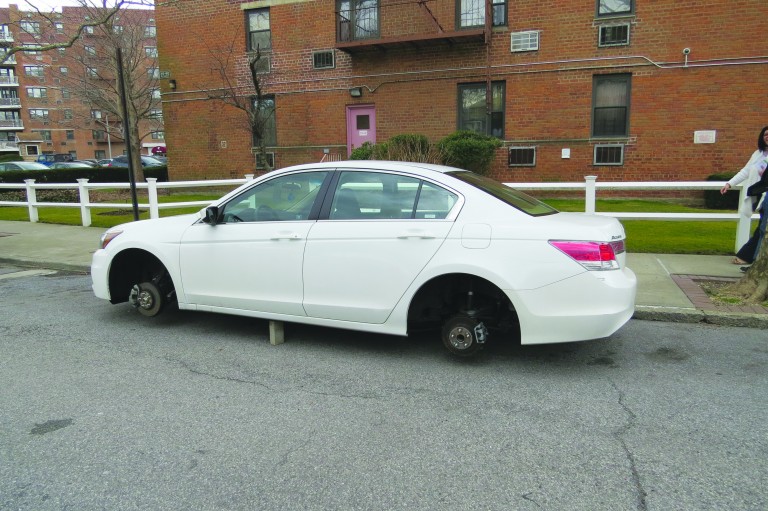 What seems like the never ending rash of rim thefts in the Howard Beach/Lindenwood area continued this week, with another brazen strike coming on Monday night into Tuesday morning.

This time, the thieves returned to their taste for Honda Accords, striking a late model, white four-door sedan parked outside the Eastwood Houses, near 89th Street and 151st Avenue. 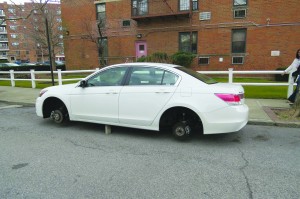 Thieves struck again in the early hours of the morning on Tuesday, this time removing three out of four wheels from the late model Honda Accord above. Surveillance footage from security cameras at the Eastwood Apartment building confirms it took the thieves less than five minutes to complete the theft before fleeing in a getaway car.

President of the Eastwood Co-Op, Michael Gulluscio, told The Forum that one of his buildings’ 60 operational cameras was successful in documenting the steps taken by the thieves.

“Our security guard is on the camera making his check of that spot at 4:30 a.m.,” Gulliscio said. “Then the guard went to the back of the buildings to continue his rounds.”

The next camera sequence clearly shows the thieves pulling up to look at the targeted vehicle and getting out of their car to begin removing the rims at exactly 4:36 a.m.

Two men left a black four-door sedan with tinted windows and began jacking up the car. “They exited the car with blocks to slip under the car after raising it up,” Gulluscio said. “Then they squatted down and went to work on the lug nuts and carried the wheels back to their vehicle, threw them in and jumped into the car.”

Gulluscio said that by the way they pulled away so quickly, it’s a fair assumption that a third individual was behind the wheel as the getaway driver. When all was said and done, they started at 4:36 and left the scene at 4:41—5 minutes later— with three wheels.

Although leads remain “pretty thin”, police are encouraged because of all the information from security cameras that will eventually lead to arrests. “They are coming in here in teams,” said Deputy Inspector Thomas Pascale. “And they are working in the early morning hours, like around 4 a.m. ” Pascale also pointed out that a rainy night is best because the weather acts as a cover for the thieves whose activities are camouflaged so to speak, by the rain. “The sounds of their crime are muffled by the rain.”

And when The Forum caught up with the owner of the vehicle, Jamie Jiminez, he was driving a tow truck, as he does everyday for his job—but ironically, this time it was to pick up his own car. “I have to go get the car and bring it off the street and then wait to get my replacement wheels.” An expense and a hassle he certainly didn’t expect and one he could definitely have lived without.

“It’s really unbelievable,” said Jimenez, “that people will do this sort of thing in this neighborhood.”

Over the last five to six weeks there have been just short of a dozen vehicles targeted by the “bad guys” as Pascale calls them. “We’ll get them,” he says. But for now the police continue to rely on the public for help. “We can’t possibly be everywhere. There just aren’t enough cops. We need your help,” Pascale said at a recent 106 Precinct. Council meeting. “Please, please call 911.”