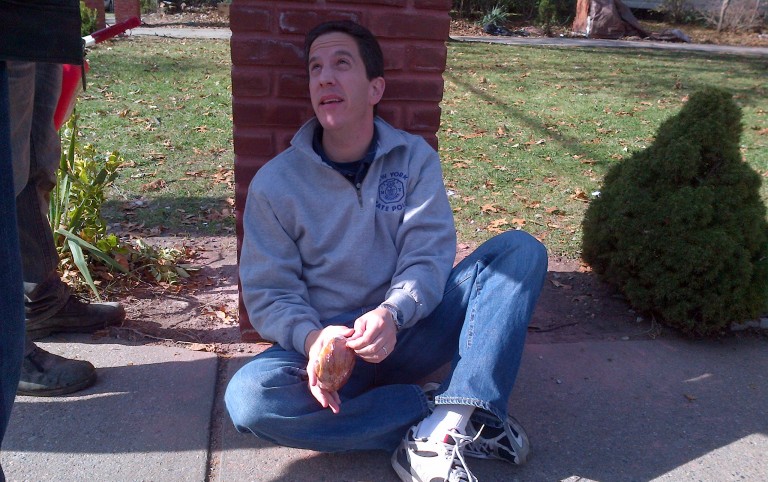 It’s been more than six months since Phil Goldfeder just sat in his car, wondering what to do.

“About 85% of my district had been either flooded or burned down. The mayor or the Red Cross had not yet arrived and the communities were not waiting for help.”

It was the thought that relief efforts had to be immediate that propelled everything that followed according to the state assembly member whose lines include the heart of communities wiped out in Hurricane Sandy. Howard Beach, Hamilton Beach, Broad Channel, Rockaway, Breezy Point, Far Rockaway are all within his district. 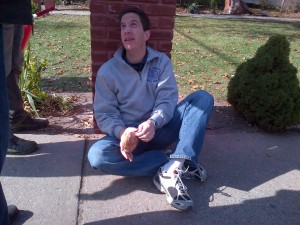 In one of the only photos of him during Sandy’s aftermath, an exhausted Assemblyman Phil Goldfeder took time on the ground for a bite, only to be accosted by angry constituents. Now the legislator will take what he learned and bring it to Oklahoma in the hopes of paying back some of the kindness shown to those in his district. Photo Courtesy of Assemblyman Goldfeder's Office.

With neighborhoods, businesses and homes literally torn to pieces, Goldfeder says what happened next was incredibly humbling. “I was so deeply moved by the heroism of regular citizens working around the clock with community leaders.” It was back-breaking, grueling work but people from every neighborhood congregated to set up to distribute food and other essentials.

“There were distribution sites in the Hamilton Beach Fire House, Broad Channel American Legion, Waldbaum’s parking lot in Howard Beach and all over Rockaway from Breezy Point to Far Rockaway,” recalled Goldfeder.

And most importantly, the assemblyman maintains, “It was through the kindness of strangers and neighbors helping neighbors that we survived.”

Personal strife was not absent either–he lost his home to flooding and sent his wife and two young children to family’s homes to stay while he hunkered down in his district after the storm.

“I found refuge for a few hours of sleep a night at local police precincts and on various couches throughout the district for nearly two months after Sandy,” he said.

But this weekend, after hearing about the tornadoes that ripped through Moore County, his mind was no longer on Sandy. “I didn’t think twice before I booked my ticket to Oklahoma City.” He says the images and stories were eerily close to the events he experienced during Sandy. “The families are struggling with so many of the same tragedies. I wanted to share my story and lend a hand of support for survivors.”

And so on Wednesday morning, Phil Goldfeder boarded a plane bound for Oklahoma. He was scheduled first to meet with the Oklahoma State legislature offering whatever he could from his new found experience.

After meeting with lawmakers, Goldfeder had an even more important meeting according to him. He was going to meet with a man from Oklahoma who had driven all the way to New York after Sandy to bring a truck load of supplies to Rockaway. “I’m going to return the favor,” said Goldfeder.

When Phil Goldfeder touches back down in New York, he will go from the airport to his home. Nearly six months after the storm, he and his family have been fortunate enough to piece their lives back together.

“I was a victim and I became a survivor because of the generosity of strangers.