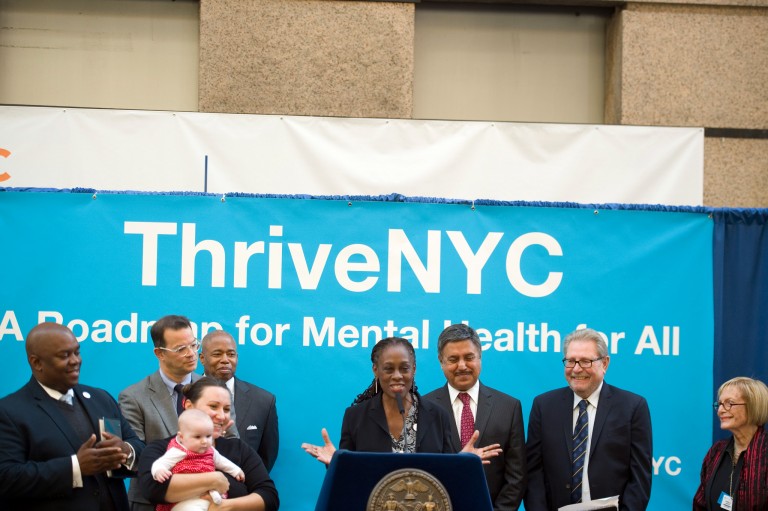 Mayor Bill de Blasio and First Lady Chirlane McCray on Monday trumpeted the release of ThriveNYC: A Mental Health Roadmap for All – a “plan of action” built on 54 initiatives to support the mental well-being of city residents.

“If you look at how mental illness has been addressed over the years, you see a lot of broken promises. You don’t see a concerted, holistic effort to help people be well and stay well,” de Blasio said. “The people of NYC needed something different, something like ThriveNYC. It will take years to address the problem the way it should be addressed. But we need to start now, we need to start aggressively. The people of NYC deserve nothing less.”

According to the administration, ThriveNYC is a response to a challenging reality: one in five adult New Yorkers face a mental health disorder each year. Eight percent of city high school students report attempting suicide, and more than one in four reports feeling persistently sad or hopeless. Deaths because of unintentional drug overdose now outnumber both homicide and motor vehicle fatalities.

Many New Yorkers are suffering, even though mental-health problems are treatable. In addition to the human toll, failure to adequately address mental illness and substance misuse costs the city’s economy an estimated $14 billion annually in productivity losses, de Blasio said.

“Like much of the United States, New York City is facing a crisis when it comes to mental health. Mental illness and substance-use disorders touch every family, and rank right up there with heart disease and diabetes as leading causes of poor health, shortening the healthy life years of New Yorkers,” said Dr. Mary T. Bassett, commissioner of the city Department of Health and Mental Hygiene. “But there has been insufficient attention to prevention, and the fragmented array of services has allowed too many New Yorkers to fall through the cracks. The challenges ahead are significant, and the mental-health system will not be fixed overnight. But the Roadmap launched today sets our city on a new path – with new resources and an unprecedented political commitment for all parts of city government to be part of the solution.”

ThriveNYC establishes a plan, de Blasio said, “to make sure that New Yorkers can get the treatment that they need.” The plan will rely on “six principles for achieving long-term change”:

De Blasio and McCray pointed to similar approaches that have successfully turned the tide on public health crises, including smoking. The administration noted how “a combination of policy bans on smoking, broad public communications, increased federal, state and local excise taxes and increased access to treatment tools helped the Big Apple cut the adult smoking rate by 35 percent in about a decade. The youth rate fell even more—by 52 percent.

“We want New York City to be a place where people can live their lives to the fullest,” McCray said. “ThriveNYC is about more services, better services and easier access to services. It’s a plan of action that shows us how to treat mental illness – and also promote mental health.”