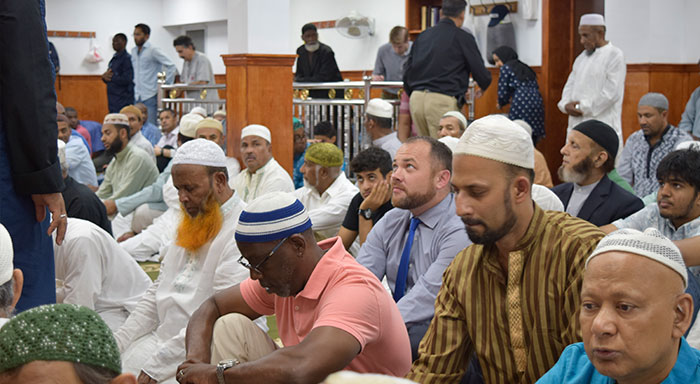 Council Speaker Johnson and Councilman Miller made the announcement on Friday at the Islamic Circle of North America New York chapter in Jamaica.

By Michael V. Cusenza
The City Council and the New York Immigration Coalition have worked together to secure a $250,000 placeholder for a future Muslim Empowerment Initiative that will benefit 14 organizations that serve the city’s Muslims, Councilman I. Daneek Miller (D-St. Albans) and Council Speaker Corey Johnson announced on Thursday. Most of the groups are based in Queens.
According to Miller, the $250,000 contributed through the City Council will enable culturally and linguistically competent non-profit groups to educate Muslim New Yorkers on their fundamental rights, conduct case management, and provide referrals for various legal, social, and healthcare services.
“As New York State’s sole Muslim elected representative, I’ve had the honor of working with these very organizations to advocate for our community and provide invaluable services,” Miller said. “The policies flowing from Washington D.C. of late have served to marginalize and malign our country’s immigrants and minorities. In response, this Council has redoubled its efforts to celebrate diversity, promote inclusion, and preserve fundamental rights for all New Yorkers; and the Muslim Empowerment Initiative, in particular, represents our latest commitment to stand squarely with our Muslim brothers and sisters. I thank Speaker Johnson for his partnership in securing this crucial funding as well as the New York Immigration Coalition, whose inspirational work on behalf of all our city’s immigrants and New Americans was vital to this undertaking.”
Last year, the Federal Bureau of Investigation’s annual Hate Crime Statistics report indicated such acts against Muslims rose 19 percent in 2016 compared to the previous year, which itself saw a 67-percent rise over 2014; and the number of incidents that transpired between 2015 and 2016 well exceeded those recorded in 2001, the year of the Sept. 11 terrorist attacks.
“As New York’s Muslim communities continue to face Trump’s attacks and a rise in hate crimes, the Muslim Empowerment Initiative will give key city organizations the tools to fight back and lift up the hundreds of thousands of Muslims who call New York home,” added New York Immigration Coalition Executive Director Steven Choi.