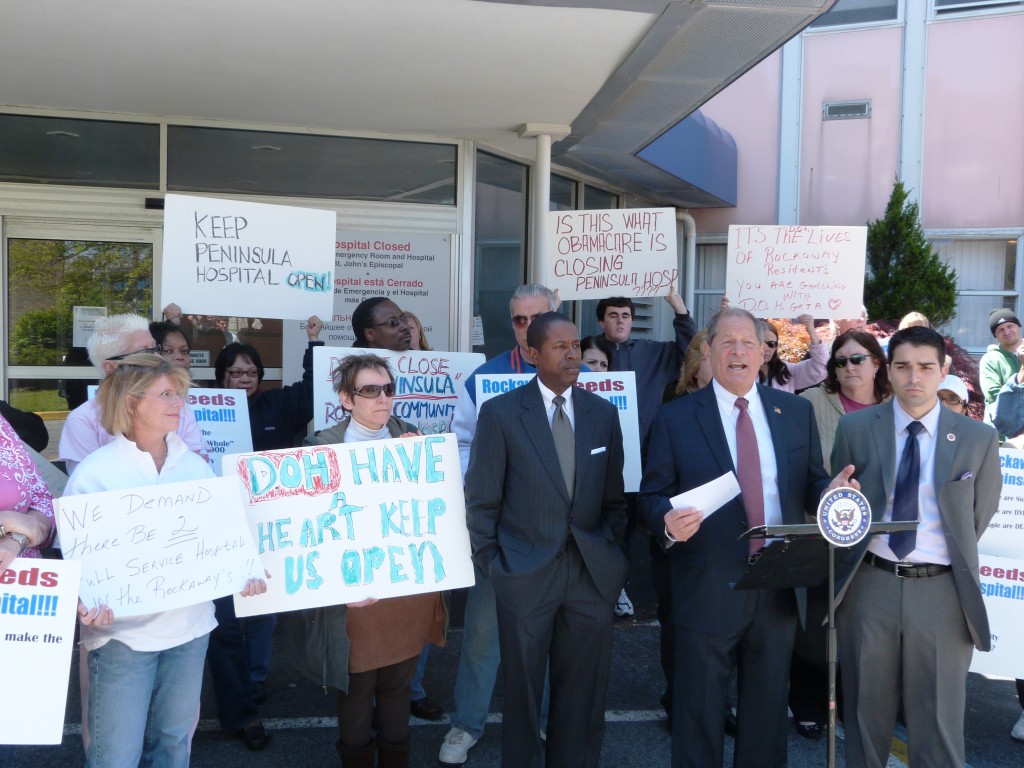 It appears that the questions surrounding the recent closing of Peninsula Hospital may finally be answered.

Queens and Rockaway residents will be getting the chance to have some of their questions regarding Peninsula Hospital’s closing answered by the Department of Health (DOH) officials at a public hearing May 10 in Rockaway Beach.

The DOH announced April 30 that Health Commissioner Dr. Nirav Shah will participate in a public hearing to discuss the impact of the closure of Peninsula Hospital, which shut down permanently on April 9.

Both Congressman Turner and Councilman Ulrich sent a letter to Commissioner Shah on March 28 requesting the public meeting to answer questions regarding the Peninsula situation and the healthcare needs of the community. After the DOH did not respond for nearly a month, Turner and Ulrich contacted Governor Cuomo on April 23 to set up the meeting.

Their request was granted, with the meeting scheduled to take place from 3 p.m. to 7 p.m. on May 10 at the Knights of Columbus, at 333 Beach 90th St. in Rockaway Beach.

“Providing residents with an opportunity to ask questions and get answers is the least the Department of Health can do, not to mention that it is required by law. There are serious questions about how the community’s health care needs will be met going forward. This meeting is a step in the right direction,” said Turner. However, the congressman also expressed disappointment regarding the timing of the meeting, from 3 p.m. to 7 p.m., noting that it would be difficult for some residents to make that time.

“The purpose of this meeting is to address the questions and concerns of the community, as such, it should be scheduled at a time when a majority of residents will be able to attend and have their voices heard,” Turner added.

“The closure of Peninsula Hospital constitutes nothing less than a health care emergency for the 130,000 year-round residents of the Rockaway Peninsula. This will only get worse as we approach the summer months,” Councilman Ulrich said in a press statement. “Commissioner Shah needs to explain what the plan is going forward in order to meet Rockaway’s health care needs. While I welcome the opportunity for this discussion, it comes only after several requests for dialogue have gone ignored, and at a time that is less than convenient for most of the hard-working people of Rockaway. They deserve better.”

In related news, the property of the former Peninsula Hospital is up for sale.
According to information reported last week by The Daily News, the sale of the now-defunct hospital was already underway, with the deadline for bidders to make their bids on the property supposedly having expired May 1.

Lori Lapin Jones, a Great Neck bankruptcy trustee who has been overseeing the closure of the hospital, has entrusted Loeb and Troper, a New York City-based firm providing audit, tax and consulting services in the health care industry, to handle the sale of the Far Rockaway property that once housed the hospital, which closed April 9.

A representative at Loeb and Troper told The Forum on Tuesday only that the firm was indeed handling the sale of the hospital property, but declined to go into specifics regarding the pending sale.

It remains unclear as to how many bids have been entered so far for the property.
The sale is one of the latest in the saga surrounding the 104-year-old hospital, which shut its doors last month, the culmination of a chain of events from earlier this year beginning with a failing grade on an inspection of its clinical lab from the state Department of Health (DOH).

The DOH report from February cited 66 violations surrounding the lab, which stored blood for hospital patients, including failure to follow safety procedures in storing blood and lack of training for lab employees.

Hospital officials announced soon afterwards that the lab was expected to be operational and up to code by the spring. However, in March, in a stunning about-face, Jones recommended that Peninsula Hospital be closed, citing a lack of available funding for reparations to the lab.

The decision angered many of Peninsula Hospital’s 1,000 employees, who were laid off as a result of the hospital’s closing, as well as local legislators. Both employees and legislators expressed confusion as to why the lab was not being inspected, and concerns regarding the possible detrimental effects on the welfare of residents in the surrounding area with only one hospital available, St. John’s Episcopal Hospital, to serve the Rockaway area.

A last minute attempt to save the hospital came in the form of an injunction request filed April 5 by Dr. Wayne Dodakian, a former hospital employee. However, Dodakian pulled the request on April 9, when the hospital was closed.
Jones has maintained a tight lip over her reasons to close the hospital, declining to return previous calls on the matter from The Forum and other newspapers.