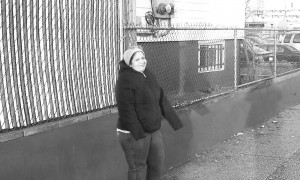 Local residents say that “working girls,” a.k.a, prostitutes, have been prowling the streets of Woodhaven for at least 40 years.

“The issue of working girls has been a problem off and on for a number of years,” said Ed Wendell, president of the Woodhaven Residents Block Association. Wendell said that his group is “very plugged-in” and usually has its ears to the street, but they haven’t heard much lately on the issue.

But, on a recent Friday night, several women could be seen loitering and talking with stopped motorists in the vicinity of Rockaway Blvd. and Atlantic Ave.

Wendell, who’s lived in Woodhaven all his life, referred to that area as the “triangle,” saying it is the site of the area’s first 24-hour convenience store.

“If people are seeing problems there, I don’t know what they’re doing about it,” Wendell said, adding that he needs residents to call the 102 precinct and report problems when they spot them. “If people call and complain, then we can tell the captain of the precinct and then cops can follow-up and be held accountable.”

A clerk at Prime Convenience store on the corner of Rockaway Blvd. and Atlantic Ave. said the girls can usually be seen “walking back and forth” on the street in front of his store. “I don’t bother with them,” the clerk said, declining to give his name. “They don’t know what they’re doing. They have no morals.” 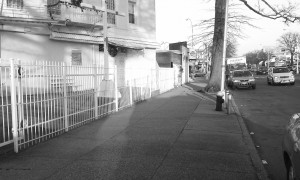 The clerk said that he had not made any complaints to police because he “didn’t want to make trouble” with the girls. “They come in here often to buy gum and drinks. I don’t want any problems.”

But Jim, an employee who works at a nearby used car dealer on Atlantic Ave., did not mince words.

“Cockroaches don’t die and the hookers will be here with them,” he said.  “Sometimes, ambulances come and take them away when they overdose but then they’re back within the next day or two.”  He added that the typical routine is they get locked up for a short time, maybe go into rehab and then they’re back in a few days.

“What I don’t understand is there are four churches in the area. How come they don’t do anything about it?” he asked. “These girls need to see the man upstairs. Maybe that’ll straighten them out.”

A customer inside the dealership, who didn’t want her name used, said she doesn’t like the constant working girl activity because the area is mostly residential and many women and children walk along the strip on Atlantic Ave. either traveling home or waiting at the nearby bus stop.

“They [the girls] walk from the newsstand on the corner of 80th Street and go all the way down into Brooklyn by the car wash at Grant Ave.” He added that the girls
generally don’t bother him because he doesn’t let them on his property and he has no communication.

But, he said some of the girls were becoming nuisances by contributing to litter along the street with bottles, food wrappers, etc. He also said that he’s seen some of the girls throw litter near the church, the Overcoming Love Ministry, at 78-14 Atlantic Ave.  Calls to the ministry were not returned as of press time.

“If the police would stay on the problem for two or three months steady, then  they’ll move… one day a month is not going to do it,” he said.

But, Officer Joseph Martins, with the community affairs division at the 102  precinct, said that they’ve been doing what they can to address the long-standing  problem zone.

“That’s always been a problem location for us over the years,” said Martins, noting that in the past few months they’ve arrested at least three or four girls in the area.

Normally, Martins said they will combat the problem by sending officers to the area but slowly it always seems to creep back. “You might be able to put a little blame on the criminal justice system too for letting them back out so quickly,” he offered.

“We know who our normal offenders are over there…we have a list of them… It’s no secret that we know what goes on, but we can really just do our best to contain the problem and keep it from spreading beyond the location.”

Some of the girls, while reluctant to talk, admitted that they have addiction problems that keep them out on the street.

One girl, who said her name was “Shelly,” said she should really stop getting high and try to get help. “I need to make money,” she said. “This is the easiest way
I know how.”

A clerk at another local convenience store reported he’d seen one girl, who goes by the name of “Blondie,” acting erratic on more than one occasion. “She always looks like she is tripping. It’s very disturbing,” the clerk said.

Tom Manning, a spokesperson for Covenant House in New York City, said the group’s outreach efforts include staff going out into the streets five days a week.

“We travel with food, drinks, and cards with information on where kids on the street can get help,” Manning said.  “Sometimes, young people come back with us to our Covenant House shelter in Manhattan on 10th and 41st St., where we care for over 300 homeless kids every night. When we first get a young person off the street, we try to meet their immediate needs (food, clothing, shower, medical attention, a safe place to sleep) and then we work on long-term solutions to their problems.”

Manning said the group’s main goal with outreach is to build trust with the kids on the street, as many have been abused and taken advantage of their whole lives and have no reason to trust any adults.

“By being out there, providing food and a helping hand, our goal is to show homeless kids on the street that there is help available.”