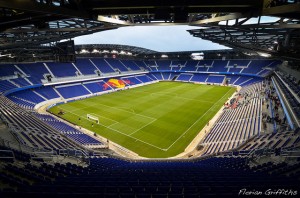 A view of Red Bull Stadium which closely resembles the proposed stadium to be built at Flushing Meadows Corona Park.

Mayor Bloomberg once again threw his support behind an MLS soccer stadium in Flushing Meadows-Corona Park on Monday, just days after a warning by Major League Soccer Commissioner Don Garber that extended negotiations with the city could force the league to look elsewhere for its stadium.

Bloomberg said the planned 25,000-seat stadium would be “great” for the city. He also sought to downplay the 13 acres of parkland needed for the stadium’s construction, by calling the land under-utilized and not in the best of condition.

During his “March to Soccer,” opening season address last week, Garber said that, in essence, if negotiations with the city for the privately financed, $350 million stadium take too long, then the league would look to another city for the launch of its 20th franchise.

In addition, while calling the stadium a “great deal for the city,” Garber also said that three years would be too long to wait if no progress was being made.

However, Risa Heller, a spokesperson for MLS, said on Tuesday that there was “no deadline” for the negotiations.

“We have no deadline,” Heller said by email. “We are very optimistic we can get this done this year and we are 100% committed to FMCP.”

Geoffrey Croft of NYC Park Advocates, a group committed to preserving city parkland, wrote on the group’s Walk in the Park blog that “Garber [by his statements] tried to put public pressure on the city by threatening to make a deal soon or else they would go elsewhere – a common tactic used by corporations trying to extract government subsidies.”

However, Heller told the Daily News that the majority of money didn’t go to pressure city officials but rather to HR&A Advisors, real estate advisors to handle technical aspects of the stadium from engineering, architecture and various financials. Heller added that the group is not lobbyists but that they often are involved in meetings where lobbying takes place.

Other groups who oppose the stadium at FMCP include the Fairness Coalition of Queens, a group of organizations dedicated to preserving parkland for city residents as well as local residents who question what the environmental impact of the stadium will be.

In the past, Council Member Julissa Ferreras, whose district includes Corona, expressed support for the idea of the stadium but had reservations regarding many unanswered questions such as where will the lost parkland be replaced and how much is MLS paying for the parkland.

Most recently, other critics reacted to leaked architectural renderings of the new stadium, which soccer officials have said do not represent the actual stadium to be built but were merely “conceptual” renderings meant to illustrate the size and footprint of the stadium to potential buyers.

Heller emphasized that the leaked drawings did not represent what a new stadium would look like. “In fact,” she said, “we haven’t selected an architect yet and will not start the design process until we have an owner for the club.”

Garber said in his address last week that the league is still in talks with potential club owners but nothing has been finalized as yet.

Several unions in Queens have gone on record in support of the proposed stadium, namely citing the potential jobs a new stadium could create. Those unions include 32 BJ Service Employees International Union, the New York Hotel & Motel Workers’ Union and the Building and Construction Trades Council of Greater New York.

The league has said a new stadium in Queens would create 160 full-time, 750 part-time and 2,200 construction jobs.