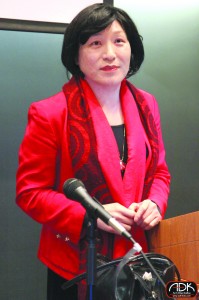 Pauline Park, a gender rights activist, is the president and acting exectuive director at the Queens Pride House.

It seems that even in a state as robust and diverse as ours, certain groups still must fight to be heard. And after reviewing this years’ proposed executive budget, it appears that the lesbian, gay, bisexual and transgender (LGBT) community in New York is no exception.

We live in times that are tough economically – and when calls for balanced budgets grow louder, times get even harder. We commend the Governor and the legislature for making every effort to right New York’s fiscal ship. We understand the need to tighten every belt, and that funding for every existing program might not be realistic. However, we are concerned that the result is an unbalanced budget, in which the harm being done to the most vulnerable in New York State isn’t worth the price. Case in point: the glaring omissions to programs and funding steams that support crucial health and social services for New York’s LGBT community. We are seeing a pattern here: this is the third consecutive budget that gives at-risk groups short shrift. And we are concerned that this trend is growing, even as the economy appears to head into more positive territory.

According to the Empire State Pride Agenda, New York’s leading LGBT advocacy group and one of the LGBT community’ leading watchdogs, this year’s proposed budget could include cuts to much-needed programs at any of 54 organizations that are lynchpins of the New York State’s LGBT Health and Human Services Network.

Here’s what has transpired: funding that in previous years was directly apportioned to these groups has been lumped into a series of competitive pools – and has been cut by 13% overall. In their testimony on this issue to the New York State legislature, Gay Men’s Health Crisis leadership joined the Pride Agenda in expressing their grave concerns about this budget, which hits scores of lifesaving community-based health and social services statewide – many of which are the only service providers in their regions and are heavily depended upon by some of the most vulnerable within the LGBT community. After years of a declining economy and previous cuts, most of these small community nonprofit organizations have been running at already-limited capacity and have cut services to the bone – while managing to maintain a level of quality services with notable advances in health and community care.

These cuts are not fiscally sound: cuts to these services put many at risk who will depend further on the pubic social safety net. It’s penny-wise and, in many cases, pound-foolish.

It is true that the Governor and the legislature have been historic in their support of the LGBT community on the issue of marriage equality, and in many other spaces. But community support extends far beyond marriage to the day-to-day, nuts-and- bolts needs of a community that still has many extreme vulnerabilities, for example, severe health disparities. We must approach our budgeting process in a fair and rational manner that considers the needs of all New Yorkers, including the ones who most depend on these lifesaving healthcare and support services.