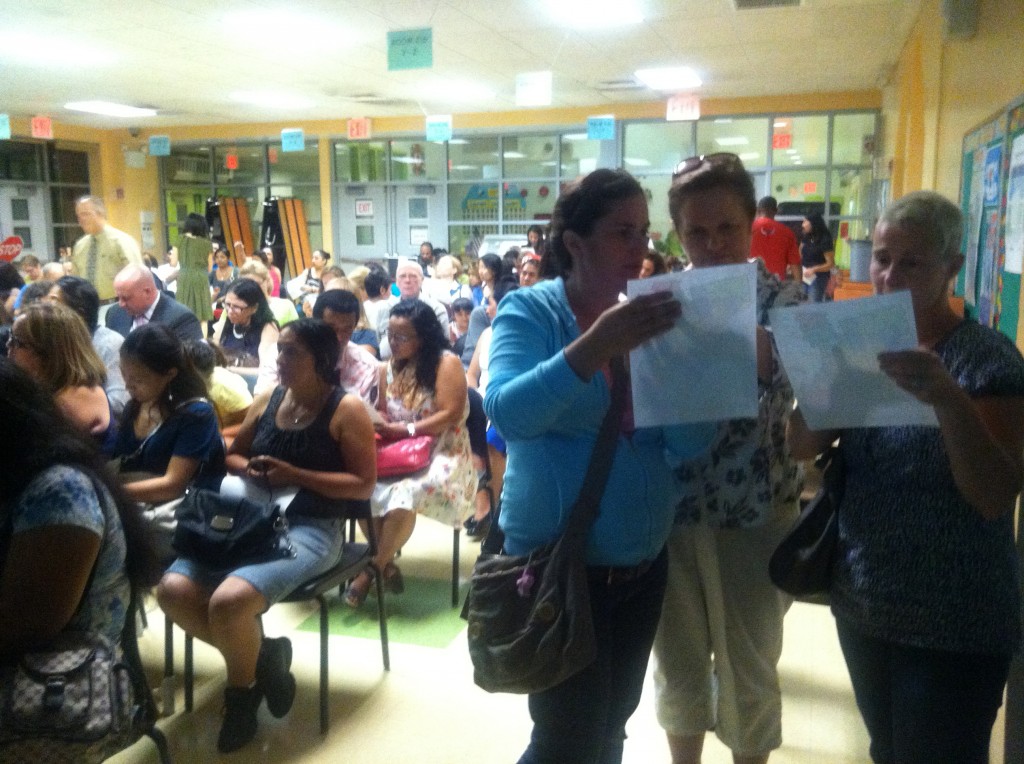 While parents, pictured here at a September meeting in Ridgewood, had previously expressed concerns about the city’s plan to rezone schools in District 24, those fears have, for the most part, been allayed, and the Community Education Council voted last week to approve the proposal. File Photo

A plan by the city Office of Portfolio Management to rezone elementary and middle schools in District 24 – an effort to alleviate chronic overcrowding – was passed last week by the district’s Community Education Council with little opposition.

The plan, which amends school zones based on neighborhood populations, was initially met with concern from parents and educators alike that worried that students at PS 229, an elementary school near the border of Woodside and Maspeth, might have to navigate the dangerous roadways of Queens Boulevard and Maurice Avenue.

Parents had been on edge following a recent incident in which an SUV jumped a curb on Grand Avenue and injured five students.

However, parental fears were allayed earlier this month when, following feedback from several area meetings, the OPM announced it would not seek to rezone PS 229 as part of the plan.

At earlier meetings, the city had said that the new zoning was partly in anticipation of new school openings including Q313 in Sunnyside and Q290 in Maspeth, which will open next year.

Comaianni added that there was very little discussion during the Oct. 22 vote in Middle Village, mainly because the proposal had already been extensively examined.  He said that only two people spoke out against the proposal just prior to the council’s vote.

The District 24 rezoning will only affect students entering kindergarten for the 2014-2015 school year.

The OPM has also indicated that a “sibling priority system” will be used, which means that if a new kindergarten student’s sibling already attends a particular school, they will be given priority based on available space, to attend the same school.

Comaianni said that the rezoning plan was needed to try and address a decades-old overcrowding problem in the district.

“We’re still the most overcrowded district in the city,” he said.