A plan to transform the former St. John’s Hospital building in Elmhurst into apartments by investors who recently doled out about $55 million for the site has raised red flags among community leaders who say the area is in dire need of medical services and affordable housing, not luxury residential units.

The new owners – a group of mostly foreign investors led by New York developer Steven Wu, according to a press release from Madison Realty Capital, which provided a loan to the investors for the site’s purchase – are expected to create a “mixed-use project incorporating residential, commercial, and community space.”

The developer was not available for comment, but according to the public relations firm representing Madison Realty Capital, the property at 90-02 Queens Blvd. will offer retail space on the ground floor and in the cellar, community space on the second floor, and 144 residential units on floors three and six and a penthouse on the seventh floor.

It is not known how much the apartments will be rented for, nor what type of commercial outfits are expected to set up shop at the former hospital, which, along with Mary Immaculate Hospital in Jamaica, closed in 2009 after its operator, Caritas Health Care, filed for bankruptcy.

Wu and the other investors purchased the Elmhurst facility from Jack Gutman, who bought the hospital building for $14.35 million in 2009.

“I deeply hope it’s not going to be a repeat of another Gutman ownership, when it sat vacant for four years,” Councilman Daniel Dromm (D-Jackson Heights) said. “It’s an eyesore to the community.”

Dromm, who noted the developer has not reached out to him about plans for the site, said he hopes the new facility, which many, including the councilman, had hoped would have once again operated as a large-scale medical facility, will include affordable housing units and a grocery store.

“I hope it’s in some way affordable for the community,” Dromm said. “It seems to me this was a real estate grab from the beginning by Gutman. It’s unfortunate because we lost another hospital to greedy developers. 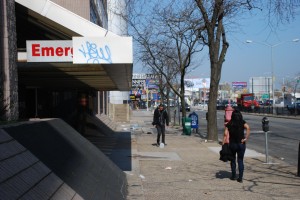 St. John’s Hospital in Elmhurst, which has been sitting vacant since its operator filed for bankruptcy in 2009, was recently sold to a developer who is expected to transform it into apartments. File photo

“It would be a drain on services for sure, and we don’t need additional luxury housing,” Dromm continued in reference to an apartment-heavy building. “We need affordable housing. To take a hospital away from us and turn it into luxury units is not a service to our community.”

While Gutman nor Wu could be reached for comment, Madison Realty Capital’s co-founder and managing member Josh Zegen said in a press release that it was a “particularly exciting and interesting deal because it highlights several trends we’re seeing in the market.

“New York has seen multiple hospital closings over the past few years, raising the issue of what happens to these large, centrally-located buildings,” Zegen continued. “Investors now understand the opportunity, and they’re looking to create value through adaptive use. For MRC, this is exactly the kind of deal we like to finance.”

Zegen noted that while “foreign funds used to flow primarily to investments in Manhattan and Brooklyn, here they went to development in Queens.

“Pricing in Manhattan and Brooklyn has reached the point where it makes sense to build in the prime locations of Queens, where transportation is excellent and population continues to grow,” Zegen said. “This is a large deal for Queens, and I wouldn’t be surprised to see more activity of this magnitude.”

Christian Cassagnol, district manager for Community Board 4 – which oversees the area that includes the old hospital – also stressed that “parking is a huge issue” in the area near St. John’s, located not far from the Queens Center Mall.

Like Dromm, Cassagnol said the developer has not spoken to the community board about the plans.

“It’s a developer from outside the community – he may not know what we need, what we want,” Cassagnol said.

Educational leaders in the area said they were particularly concerned about what the new development would mean for schools that are already overcrowded – namely PS 102 in Elmhurst and PS 49 in Middle Village.

“Concerns about residential development without proper supports will only burden the existing community of vital services, such as medical care, transportation, utilities, and public school education,” said Dmytro Fedkowskyj, the former Queens borough president’s appointee to the city Panel for Educational Policy and a Middle Village resident. “It’s no secret that Queens is struggling with the loss of this medical facility, and now developers want to salt the wound by developing residential units out of it. Give us a break and use the property for benefit of the residents, like another hospital. I’ve been a resident of Queens my entire life, and our population has grown to the point that changes such as this will affect the quality of life for everybody nearby.”

Fedkowskyj went on to say that the hospital property is “located in the most overcrowded school district in NYC” and that there is “no room in PS/IS 49 or in PS/IS 102.”

The former PEP representative suggested that the parking garage across from the hospital be used as a school for students in kindergarten through fifth grade.

“This should be a requirement, not an option for the developers if they plan to convert and build onto this property,” he said.

Alicia Vaichunas, the president of the Parent Teacher Association at PS 49, too stressed that the school, where her son goes, cannot accept any more students.

“If we get St. John’s and the shelter moving in, that’s really bad,” Vaichunas said, referring to the homeless shelter that the city Department of Homeless Services wants to be operated on Cooper Avenue on the border of Glendale and Middle Village.