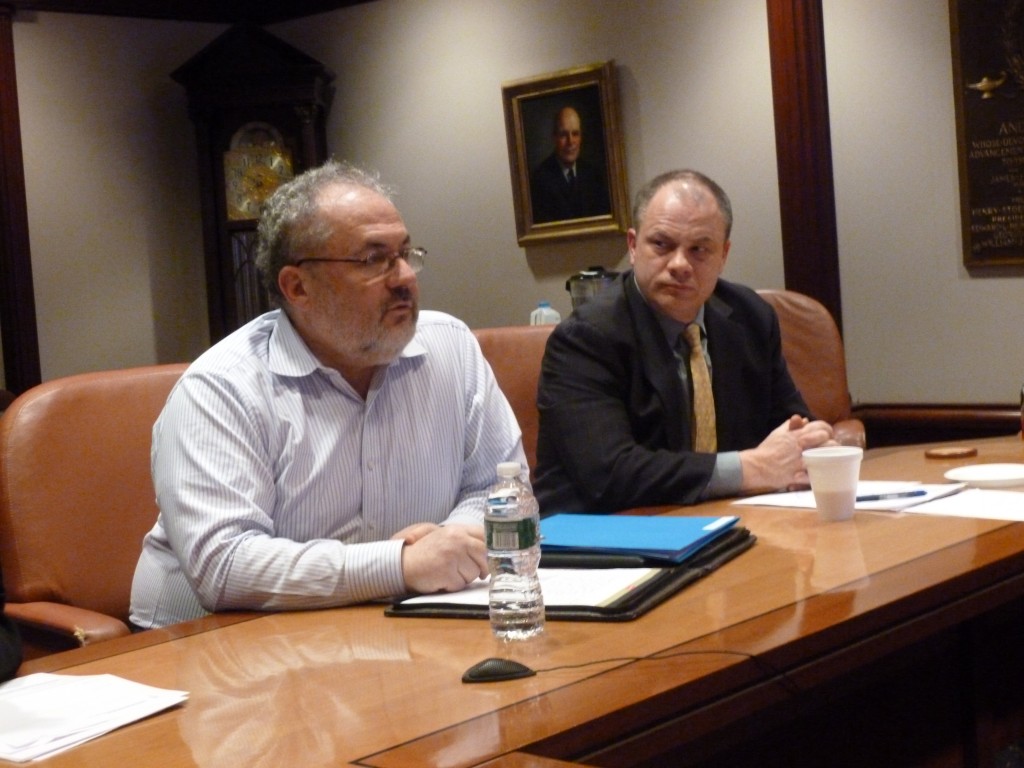 Queens Library Board of Trustees Chairman Gabriel Taussig, left, and Queens Library CEO Thomas Galante sit down with reporters on Monday to discuss the controversy that has surrounded the institution in recent weeks. Photo by Phil Corso

Queens Library CEO Thomas Galante responded in detail to reports scrutinizing his five-year contract with the system, which included a $392,000 salary and an evergreen clause that effectively renewed itself annually.

He and other library heads, including Board of Trustees Chairman Gabriel Taussig, sat down with reporters Monday to outline steps they were taking to both review and defend the CEO’s contract as the library moves forward. One of their first steps, according to Taussig, was a recent board vote to hire consultant The Hay Group for roughly $28,000 to review Galante’s contract and help formulate a new one.

“We need to think through and understand if we’re going to make changes, exactly what those changes are,” Taussig said. “These are all steps that are important and we believe will enable us to better oversee the important work of this great institution and facilitate our ability to give the people of Queens what they so desperately need.”

The library system said the Hay Group would be looking at contract terms and compensation packages offered at institutions similar to the Queens Library system, considering things like the size and scope of the job and a range of salaries. The group will report back to the board after 90 days with recommendations before moving forward, the library said.

“I and the board are fair people and will make sure that whatever the end result is will be fair, reasonable, equitable and competitive,” Galante said.

Galante has been at the center of attention since reports outlined his six-figure salary earned amid widespread layoffs at the library and some elected officials have since weighed in on how the system should be governed moving forward. State Sen. Tony Avella (D-Bayside) even called for Galante’s resignation earlier this month.

When asked about the senator’s remarks, Galante said he had no reaction and was not considering a resignation.

A portion of Galante’s contract, referred to as an evergreen clause, received particular interest because of its ability to renew itself each year and allow for a nearly $2 million payout if the CEO were terminated. Taussig said the library recognized the clause had become a source of some resentment, which was why future contracts would not include the stipulation.

Galante also defended criticism he received over a second part-time job he holds
with the Elmont Union Free School District on Long Island, where he works as a business consultant. The CEO said he had a working history with the school district since the 1980s and remained involved, but only in his free time when he was not on the library’s clock. He has since been clocking in roughly 20 hours a week at about $150 an hour since 2008.

“I am a workaholic. I enjoy what I do. So I probably put in close to 100 hours a week at the library and about 20 in Elmont,” he said. “Most of that work is done either at their site or its done at my house remotely. I do not do work for them here or anywhere other than over at their place or mine. It’s just like anybody else with a second job.”

Queens Borough President Melinda Katz penned a letter to the library system last week, calling on trustees to overhaul its governance structure and restore the system’s reputation in the wake of recent reports. Katz recommended the library establish a fixed term of employment for Galante – without an evergreen clause – and limit the type of outside employment the library has access to, in light of reports that outside custodial contractors were being hired in lieu of union workers.

“Faith must be restored in our library system,” she said in her letter. “It is only through these reforms that I believe the Queens Library can gain back the trust and respect of the public and all the stakeholders who wish to return it once again to its place as the premier institution of our borough.”

Looking ahead, however, Taussig and Galante said they did not see the recent media attention as a threat to the library’s ability to secure funds through elected officials and other means because at the end of the day, they were all in it together.

“I think our elected officials appreciate what the libraries do in their communities,” Taussig said. “I think they understand that in order for us to be able to continue doing that, we need to be properly funded.”