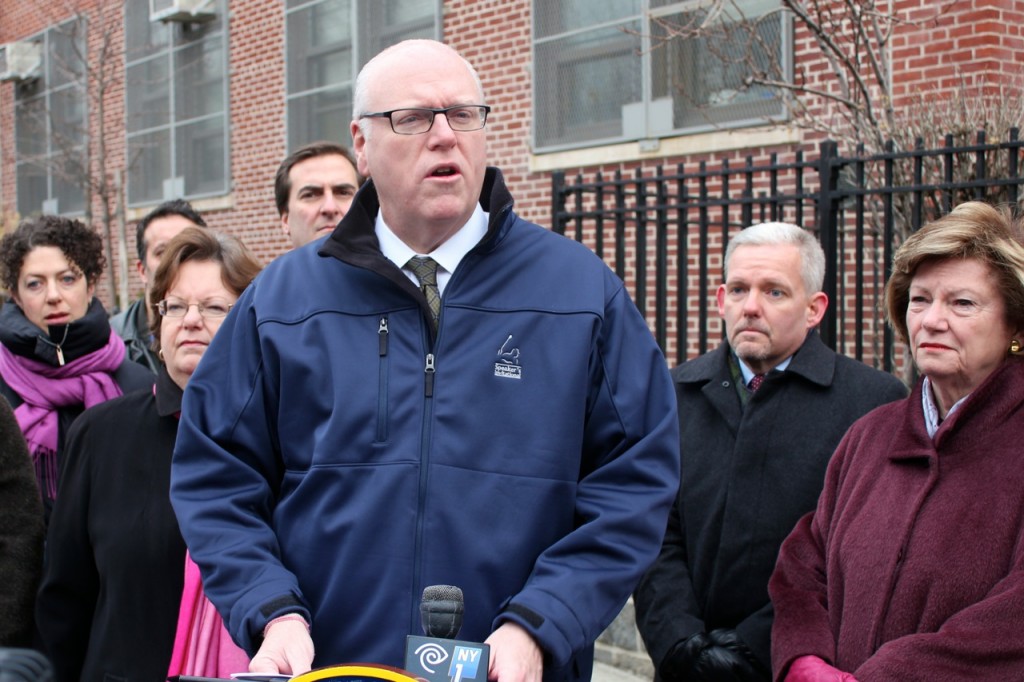 U.S. Rep. Joe Crowley, center, joined Assemblywoman Cathy Nolan, back left, state Sen. Michael Gianaris, back center, Councilman Jimmy Van Bramer, second from right, and Assemblywoman Marge Markey, right, last month to denounce the city’s plan to bus hundreds of students from PS 11 to the other end of the school district while the facility is undergoing renovations. The politicians this week praised the city for its decision to hold off on a vote on the matter. File photo

Plans to temporarily relocate Woodside students to a school on the other side of the district in Astoria have been put on hold – for now.

Politicians and parents have been pulling for the city Education Department to nix its plan to bus approximately 250 kindergartners from PS 11 students from Woodside to PS 171 in Astoria as their school undergoes an expansion project, and a recent vote to delay a decision was welcome news. City Schools Chancellor Carmen Fariña called on the city Panel for Education Policy to hold off on the vote to allow more time for debate, officials said late last week.

The city announced plans to expand PS 11 at 54-25 Skillman Ave. by adding 300 seats in an annex earlier this year to ease overcrowding at the school, but with that came the price of bussing some of the youngsters to PS 171 in Astoria three miles away in the interim. Construction was slated to begin this summer but only if the PEP gives the go ahead, officials said.

U.S. Rep. Joseph Crowley (D-Queens, Bronx) has been at the forefront of the opposition and said he was encouraged to see the city take more time before deciding what to do with the more than 250 potentially displaced kindergarteners.

“Every alternative must be considered to ensure that these young children receive a quality education without having to be uprooted from their home community,” Crowley said. “I call on the Department of Education and the School Construction Authority to use this time to once again, consider the serious concerns of the parents and elected officials with their current proposal.”

Following Fariña’s decision, a number of elected officials penned a letter on March 21 to the chancellor, suggesting that the students slated to be transported to Astoria should instead go to such an alternative site as St. Teresa School in Woodside. Currently, PS 199 rents the first floor of the St. Teresa School for its kindergarten classes, but the second and third floors of the building are unoccupied.

“The option would be much closer to PS 11 and would provide the adequate space needed for a safe and positive learning environment, as well as address the concerns of the parents that have communicated with our offices,” Crowley, Queens Borough President Melinda Katz, Assemblywoman Catherine Nolan (D-Ridgewood), state Sen. Michael Gianaris (D-Astoria), Assemblywoman Marge Markey (D-Maspeth), Councilman Jimmy Van Bramer (D-Sunnyside), and Councilman Daniel Dromm (D-Jackson Heights) said in the letter.

Dmytro Fedkowskyj, the former Queens borough president’s representative on PEP, has also called on the city to finetune its proposal, saying that while relief from jampacked classrooms is welcome, young students should not have to be bussed far away to attend school while construction is underway.

“While the expansion of PS 11 is a necessary investment in our children’s education and vitally important to alleviating our overcrowded schools, our youngest students deserve a better solution that doesn’t place such a heavy burden on them and their families,” Crowley said. “Our children only get one real opportunity at a great education and we need our city to do right by them.”

PS 11 parent Martin Connolly will have three kids attending the school by fall 2014 and said the city needed to take this time and find another school nearby. Astoria’s PS 171, he said, was nearly 30 minutes away by bus and not easily accessible by public transportation, putting parents in a tough spot.

It was not the first time the PEP delayed its vote on the matter, either. The same thing happened earlier this year and evoked a similar response with elected officials calling on the city to reassess the plan and its impact. The PEP will revisit the plan at its April 19 meeting, the DOE said. A public comment period for the proposal will also remain open until 6 p.m. on April 8, the city said.

Public comments can be directed towards Emily Ades at the DOE, by phone at (212) 374-7621 or by email at D30Proposals@schools.nyc.gov, the Education Department said.