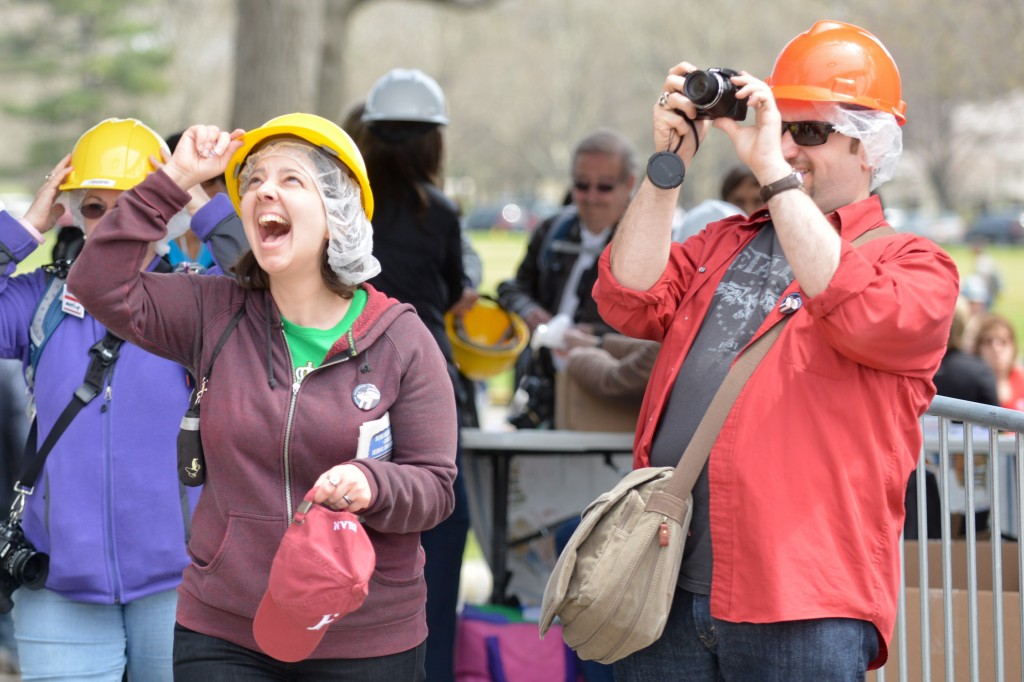 Many of those who attended Tuesday’s festivities were overjoyed to be there, even after spending hours in line. Photo courtesy Daniel Avila/NYC Parks

They started streaming into Flushing Meadows Corona Park just as dawn was breaking Tuesday morning, waiting for hours to glimpse the inside of a building many of them saw 50 years ago – when they, along with millions of others from around the globe, flocked to a fair that promised a future where technology and cultural understanding reigned supreme.

Patiently, the more than 2,500 people who came Tuesday from across the city – and the country – for a tour of the New York State Pavilion, which was built for the World’s Fair that opened April 22, 1964, stood in line to catch the first look inside a building that has not been open to the public in decades.

Finally, upon making it to the opened gates of the pavilion, which the National Trust for Historic Preservation designated a “national treasure” during a press conference just before the pavilion opened to the public, they threw up their hands with joy and even kneeled before the decaying and iconic structure that many said they hope to see preserved.

“It’s so emotional being here,” said Long Island resident Tom Robinson, who came to the 1964 World’s Fair as a 9-year-old and was the first person to enter the pavilion Tuesday. “I wish a lot of the people who came with me to the fair 50 years ago were still here.”

Fifty years ago, the pavilion consisted of the Tent of Tomorrow, three observation towers, and the Theaterama – which is now the Queens Theatre. During the fair, the observation towers held a snack bar, gift shop and viewing areas, with the tallest tower perched 226 feet above the fairground.

The Tent of Tomorrow’s floor was designed as the world’s largest map, depicting the entire state of New York in terrazzo paving with 567 panels, each weighing about 400 pounds.

Following the World’s Fair, the space was used for concerts – including Led Zeppelin, Fleetwood Mac, and the Grateful Dead in 1969, as well as a roller skating rink in the 1970s. But, by 1976 the roof had become unstable and the tent was removed, leaving the giant map of New York to be damaged by the forces of weather and rendering the space unusable by the general public – save for those residents who confessed to sneaking into the spot.

Beginning in 2009, the New York State Pavilion Paint Project, an all-volunteer group that worked with the Parks Department to host last week’s event, launched efforts to revitalize the structure that had fallen into disrepair and has since painted and maintained the pavilion. And in recent months, there has been a push by residents – including members of the group People for the Pavilion, elected officials, and civic leaders to restore the pavilion to the point that it could be used by the millions of people who come to Flushing Meadows Corona Park each year.

“In the last 50 years, Flushing Meadows Corona Park has grown from the site of the World’s Fair to the home of the World’s Park,” Queens Parks Commissioner Dorothy Lewandowski said. “As we celebrate this anniversary, it is just as important that we look to the next 50 years and plan for the park’s future.”

Lewandowski and Borough President Melinda Katz, as well as many other elected officials, vowed to preserve the pavilion, and Katz said she was thrilled with the National Trust for Historic Preservation’s decision to name the site a national treasure.

“This designation is most appropriate given the pavilion’s distinctive architectural style and its connection to the excitement and hopefulness that captivated the world at the beginning of the Space Age.”

Saying that attending the 1964 World’s Fair was “one of the most wonderful experiences I’ve ever had in my life,” Assemblyman Marge Markey (D-Maspeth) too praised the trust’s decision.

“It should also meant that we can be optimistic about the preservation and reuse of the entire iconic New York pavilion, just as other signature structures from those fairs have become vital cultural organizations for Queens and New York City,” said Markey, who co-chaired the World’s Fair Anniversary Committee with Katz.

“Other parts of the world, they have buildings that are thousands of years old,” Polgar said. “This is 50 years old, and they’ve let it go. This is iconic, and it’s falling apart.”

And while plenty of people focused on future plans for the pavilion, many were transported to five decades ago, when they spent time at a fair that drew countries from around the world, many of them developing nations because a number of the Western European countries boycotted the fair over politics connected to master-builder Robert Moses, the brainchild of the event.

“It was such great fun,” said Elaine Goldstein, a Howard Beach resident who attended by the 1964 event and the 1939 World’s Fair, also held in Flushing Meadows Corona Park. “You had all these different countries there, and you got to see all their different clothes and the products they made. It was exciting.” 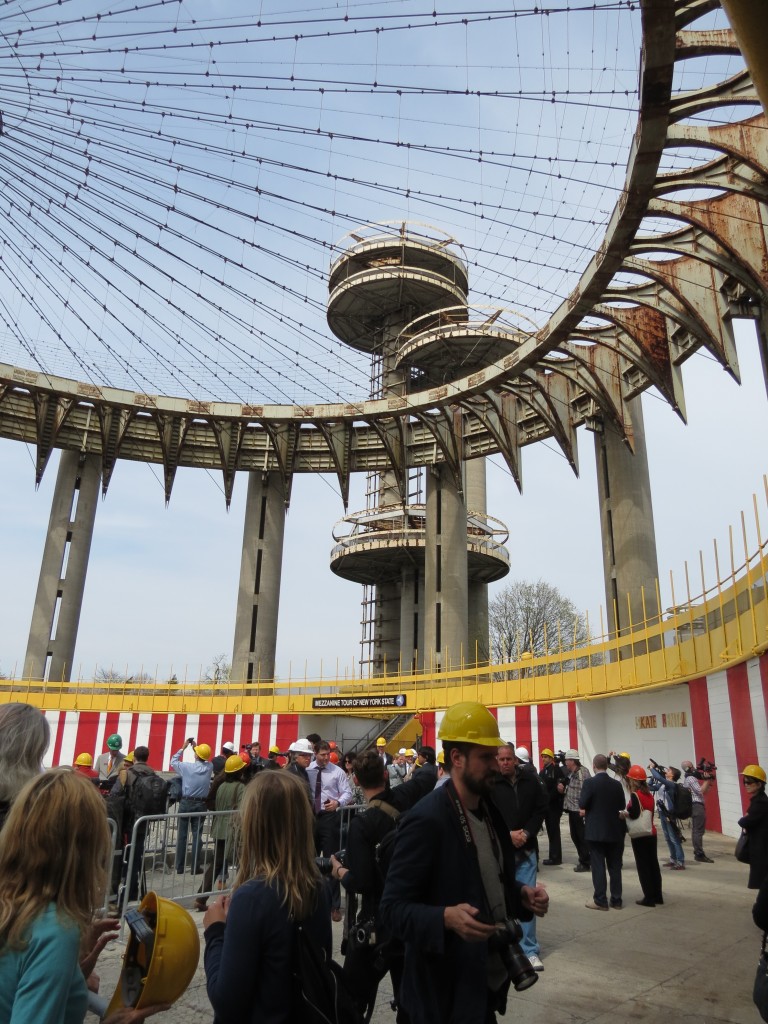 More than 2,500 people came for the pavilion opening, when the structure opened to the public for the first time in decades. Photo by Anna Gustafson 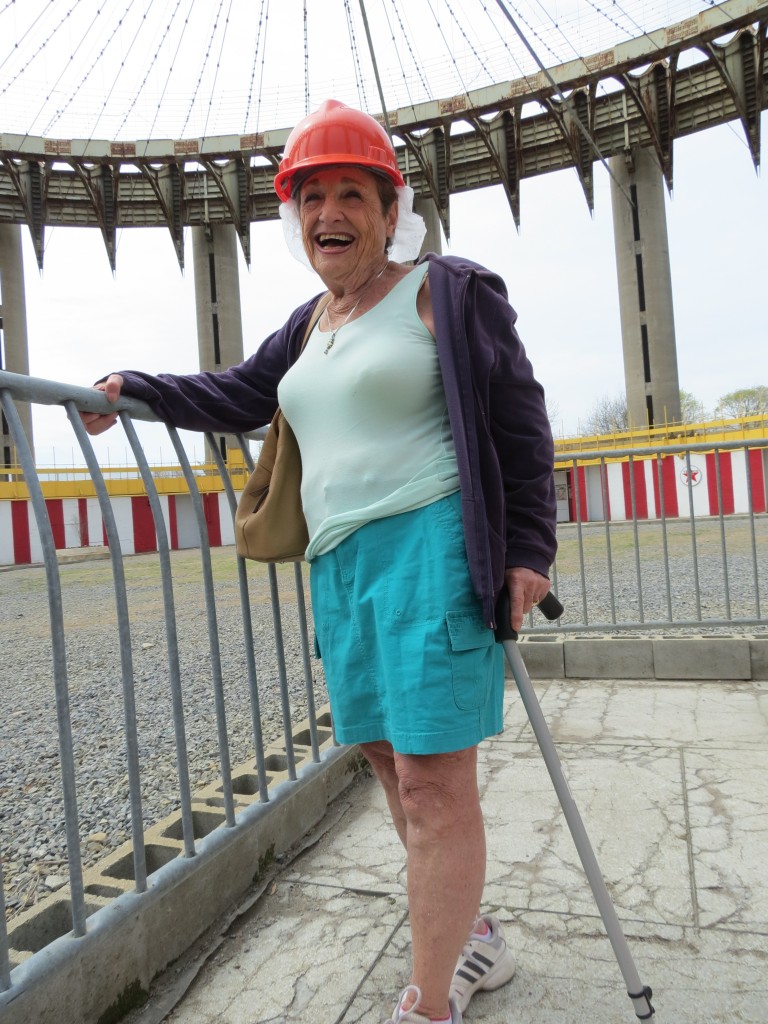 Elaine Goldstein, a Howard Beach resident, visited both the 1939 and 1964 World’s Fairs, both of which were held in Flushing Meadows Corona Park. She was 9 years old when she first glimpsed the World’s Fair in 1939. Photo by Anna Gustafson 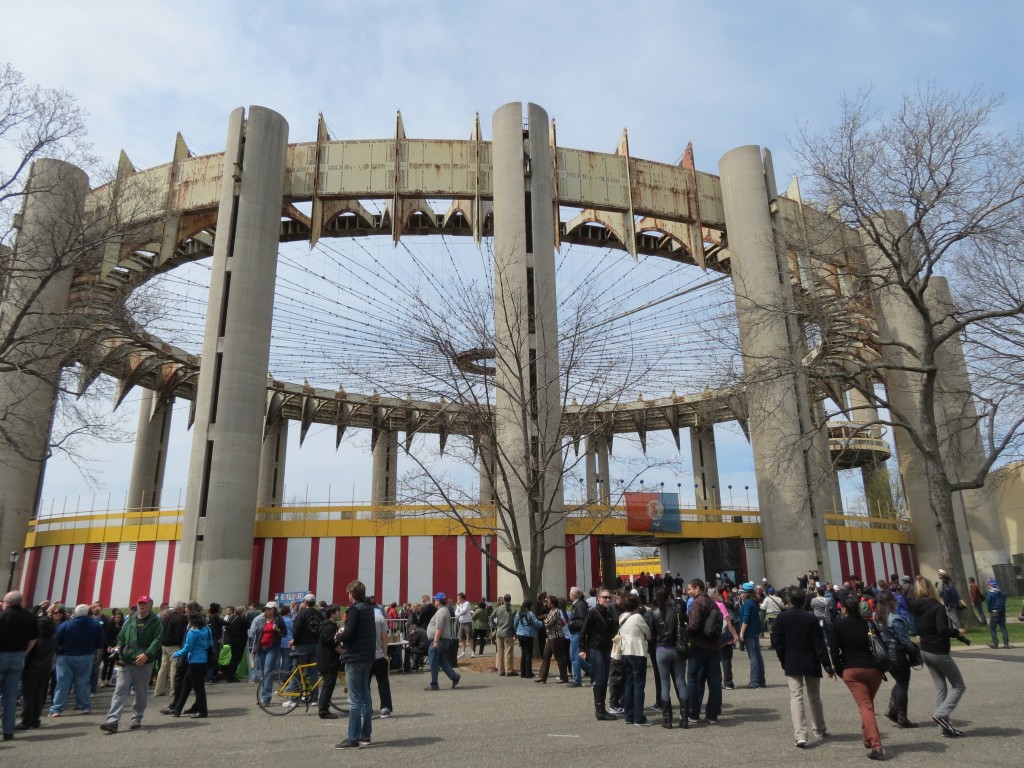 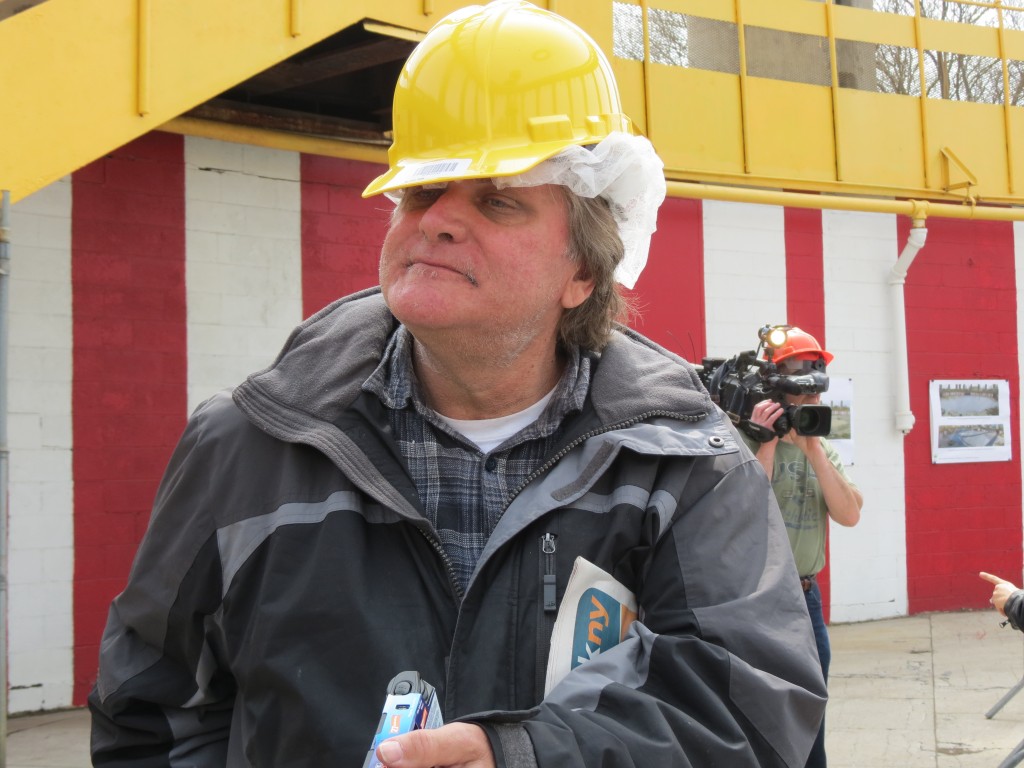 Tom Robinson, of Long Island, was the first person to enter the pavilion Tuesday. He called the event “emotional,” saying he wished those he came to the World’s Fair with 50 years ago were still alive. Photo by Anna Gustafson 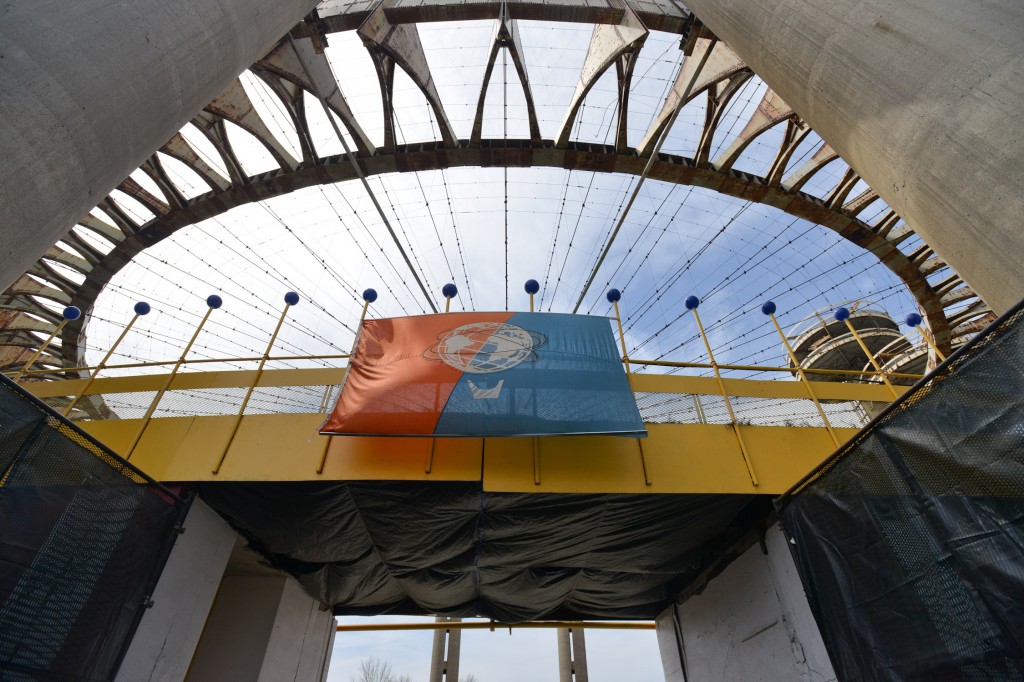 The doors to the New York State Pavilion opened to the public for the first time in decades on Tuesday – exactly 50 years after the World’s Fair opened on April 22, 1964. Photo courtesy Daniel Avila/NYC Parks 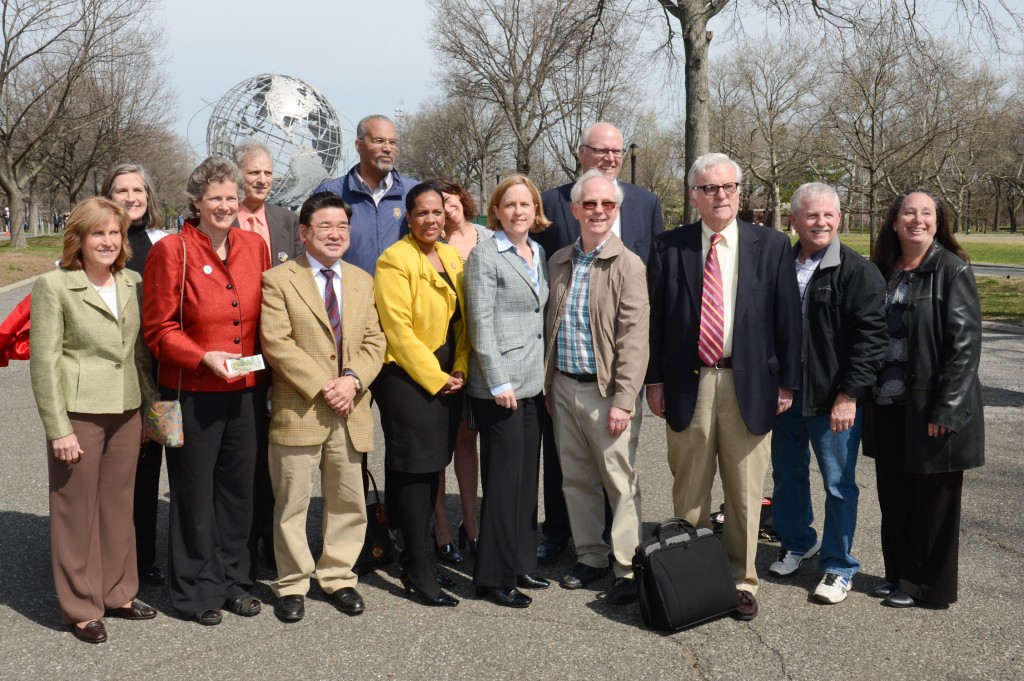 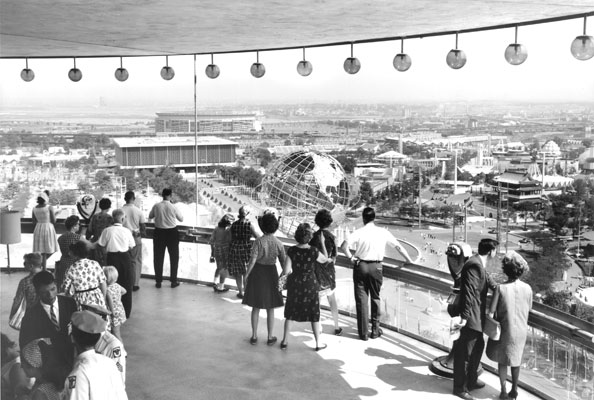 Visitors to the World’s Fair in 1964 could ascend to the two observation decks of the New York State Pavilion and enjoy a 360 degree view of the fair below them. Photo courtesy NYC Parks 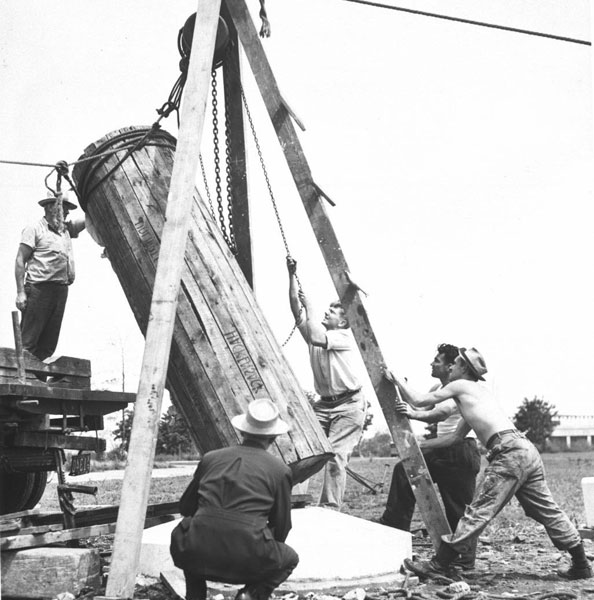 During the 1939 World’s Fair, the Westinghouse Time Capsule was buried with the intent of being opened in the year 6939 – 5,000 years after it was put in the ground. Whoever opens it will find copies of “Life” magazine, messages by Albert Einstein and Thomas Mann, cigarettes, and glass tubes containing seeds of the country’s biggest crops, as well as millions of pages of text on microfilm. Photo courtesy NYC Parks 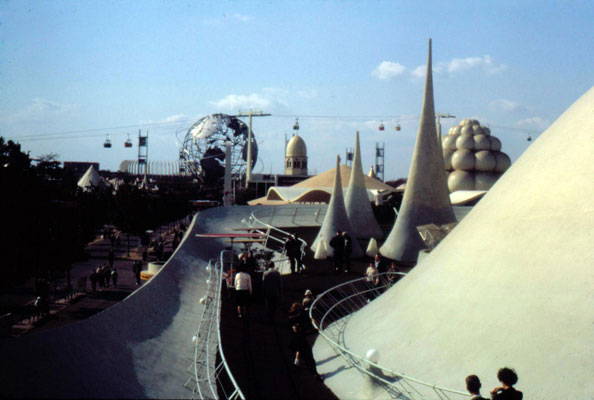 A view from inside the Eastman Kodak Pavilion at the 1964 World’s Fair, which had an undulating roof that was designed to provide a tempting backdrop for visitors’ photos. The “bubble roof” of one of the many Brass Rail snack bars can be seen in the upper right hand corner. Photo courtesy NYC Parks 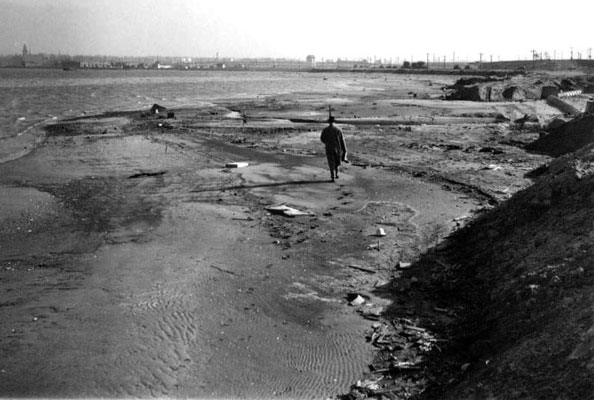 In The Great Gatsby, F. Scott Fitzgerald described the area that would be become Flushing Meadows-Corona Park as “a valley of ashes — a fantastic farm where ashes grow like wheat into ridges and hills and grotesque gardens.” This photo was taken in 1936, during the park’s construction. Photo courtesy NYC Parks 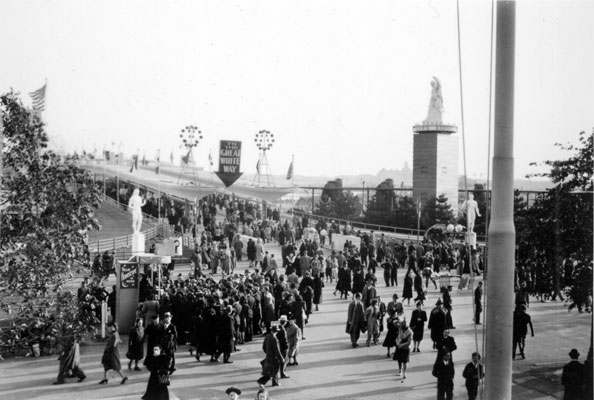 During the 1939 World’s Fair, the Empire State Bridge led visitors past international flags as they entered the fair. More than 44 million people would visit this fair during the two years it was held. Photo courtesy NYC Parks