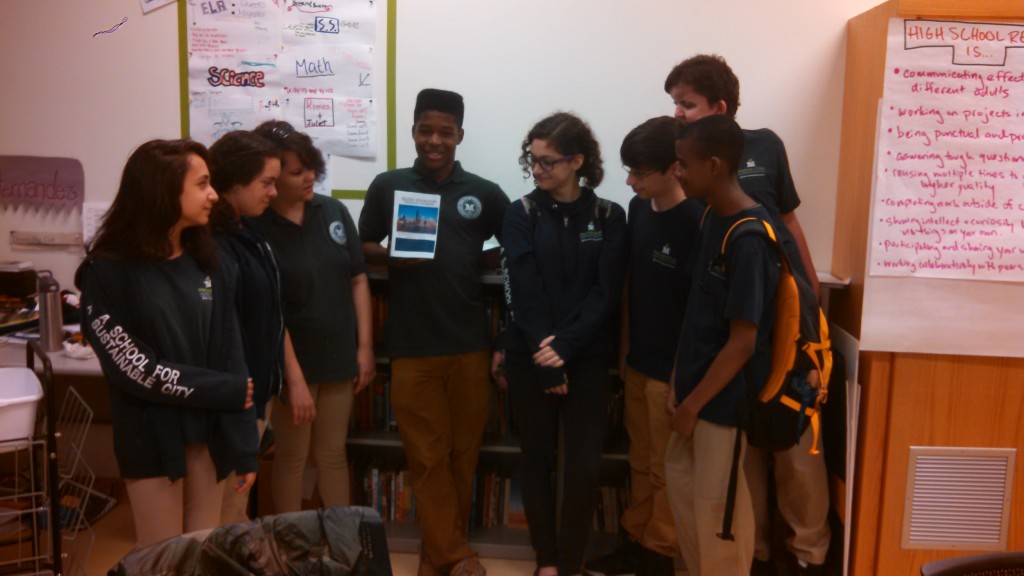 A group of middle school students in Forest Hills wrote “Queens Migration: Origins Stories,” which will be presented at a book launch this Saturday. Photo courtesy Metropolitan Expeditionary Learning School

A group of Forest Hills middle schoolers took a step back into history to tell the stories of their immigrant ancestors.

More than 50 oral histories joined together to form “Queens Migration: Origins Stories,” which Metropolitan Expeditionary Learning School students will present at a book launch Saturday night. Each story focused on Queens residents and their journeys while immigrating to the United States.

Evan O’Connell was one of the three English teachers behind the project, which guided nearly 115 eighth-graders through the process of interviewing, transcribing and ultimately sharing the stories of immigrants’ pasts. It all paid off in the end when the students learned their hard work will soon become archived forever inside the Queens College Library’s collection, he said.

“This will be a nice artifact for them moving forward in their academic lives,” O’Connell said. “We felt like we had such a unique opportunity here. Our district is really vast and our student body represents such a huge swath of Central Queens, so we thought if we didn’t celebrate diversity in this way, it would be a missed opportunity.”

It took months for the students to study immigration, find an interview subject, develop questions and conduct interviews, the teacher said. And since most of the students were already living in one of the most diverse boroughs in the city, O’Connell said they did not have to look too far to find a piece of history.

“We had each student brainstorm somebody in their life, often a family member, to sit down and talk to,” he said. “Each piece was written in the first person. It was the job of the students to capture those stories as accurately as possible.”

When it was all finished, O’Connell said the students found themselves with a hefty book of historic stories detailing the journey of those first arriving to America so many decades ago. With each report, O’Connell said he asked the students some key question: Does this really match the dream?

“There are so many interesting stories covering a broad range of topics,” he said. “People come from all over the world, and we organized the book by regions to illustrate that.”

It was the third consecutive year that students at the school had compiled such historic accounts of immigrants’ pasts, but this was the first time their stories were ever published in a professional way, the teacher said. It was easier than many might think, he added, as teachers utilized self-publishing software online to make the students’ works come to life.

Each finished product was turned in as oral histories with collaborative help from Brooklyn Historical Society and Queens Memory Project historians. By buddying up with the pros, O’Connell said students were able to gain a new perspective into history.

“We were lucky to be able to work with these groups. Their goals were to capture the everyday lives and stories of the people who live in this city,” he said. “So when we told them that we wanted to publish our own book, they jumped in.”

The students will be showcasing their work on May 31st at the MELS International Night, O’Connell said. And looking ahead,  the teacher said the entire English department was hopeful to continue the new tradition of revitalizing immigrants’ stories and giving the future leaders of Queens a glimpse into the past.

“When you have personal anecdotes that illuminate things and grab the headlines, it enhances peoples’ understanding that it’s not just a group of people,” he said. “We’re all a part of history. It is our hope that people might pick this up in the future and read a story that one of our kids captured.”