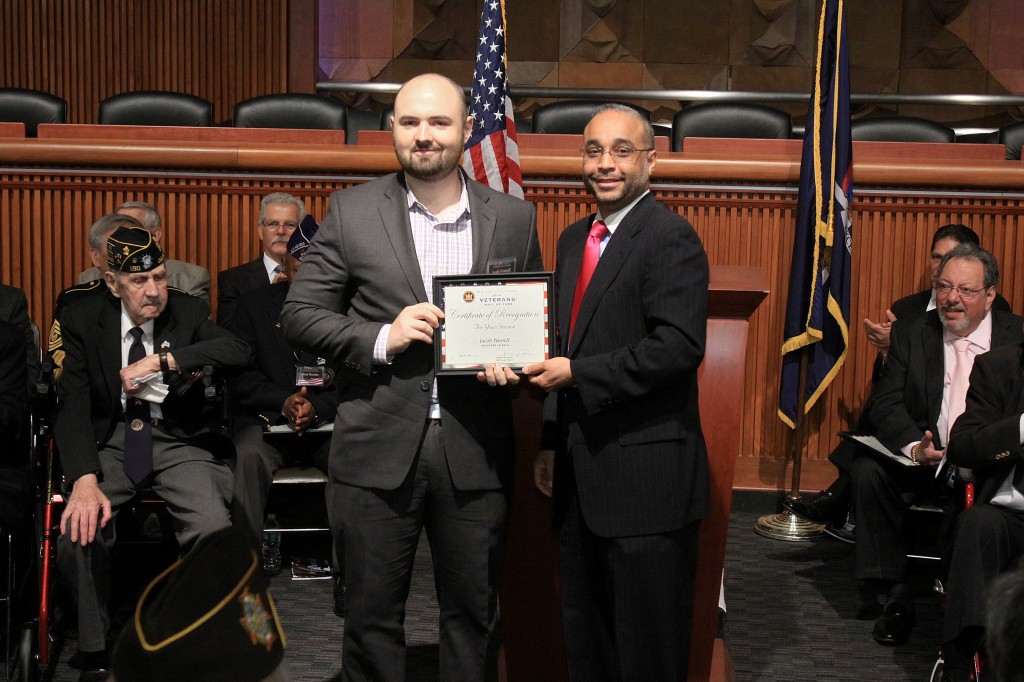 Jacob Worrell put it all on the line for his country, and a state senator in Queens expressed his token of gratitude by inducting him into the Veterans Hall of Fame.

In the spirit of Memorial Day, Worrell was invited to Albany last Tuesday with state Sen. Jose Peralta (D-East Elmhurst) for an induction into the state Veterans’ Hall of Fame alongside several other heroes from throughout New York. He retained the rank of sergeant while serving as a team leader in the 172nd Stryker Brigade and finished a 16-month combat deployment in Iraq as part of Operation Iraqi Freedom.

His name was one of more than 50 distinguished veterans who served in all branches of the country’s armed forces, including the Army, Navy, Coast Guard, Air Force and Marine Corps.

“The freedoms and security we cherish as Americans come at a very high price for those serving in the military in times of conflict. It is fitting and proper that we who are the beneficiaries of those who risk their lives, must never forget the courage with which these men ad women served their country,” the official Senate proclamation read. “Our nation’s veterans deserve to be recognized, commended and thanked by the people of the state of New York for their service and for their dedication to their communities, their state and their nation.”

While in Iraq, he also performed various patrols in some of the military hotspots of Mosul, Baghdad, Rawah and others.

Peralta celebrated the East Elmhurst native as not only a war veteran but also a crucial community leader.

“As an elected official, I have the privilege of honoring some very special people for the extraordinary contributions they have made to our community, our city and our country,” Peralta said in a statement. “Jacob Worrell is a very special person. We are indebted to him not only for his bravery on the battlefield, but also for his service in the community.”

Worrell grew up in New Hampshire and enlisted in the United States Army in 2003. He completed his basic and advanced training at Fort Knox and graduated just five months later.

After leaving active duty, Worrell earned a degree in economics and philosophy from Amherst College and continued working with Iraq and Afghanistan Veterans of America, an advocacy group dedicated to supporting the more than 2.4 million U.S. vets from the wars. His name was added to the star-studded list of state veterans in the Hall of Fame, honoring heroes for their service to their country and community and recognizing their contributions to both military and civilian life.

He worked his way up to director of the Iraq and Afghanistan Veterans of America’s user experience department, helping lead the development, implementation, monitoring, reporting and evaluation of the group’s member-focused digital products, his biography read.