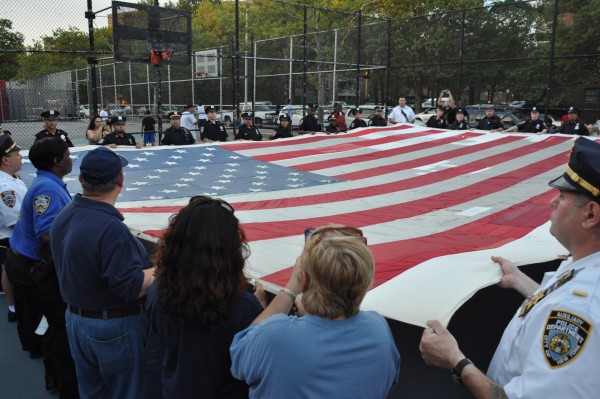 National Night Out Against Crime festivities are scheduled for Tuesday evening across the borough. File Photo

Central and southern Queens police precincts rolled out their plans for this year’s National Night Out against crime, scheduled for Tuesday, Aug. 5.

Area precincts, including the 100th, 102nd, 104th,  106th and 112th, all announced unique events in their respective beats across the borough as the Police Department continued its summer celebration tradition. Precincts and their respective community councils citywide have been coming together for years once a year in recognition of the Night Out festivities with events featuring barbecues, games and other family activities.

The 100th Precinct, which serves the Rockaway Peninsula, announced its National Night Out event for Aug. 5 from 5 p.m. to 8 p.m. at the hockey rink located at Beach 108th Street and Shore Front Parkway. Some of the highlights for this year included Kings of the DJ’s Eddy Pastore, free popcorn, cotton candy, ices, face painting, caricature portraits, carnival games and even a karate show. Copy of the year awards for the precinct will also be doled out, the precinct said.

Parking for the 100th Precinct’s National Night Out will be offered at Martin De Porres High School on Beach 111th Street, the precinct said.

The 102nd Precinct, which patrols communities like Kew Gardens, Richmond Hill and Woodhaven, said it would be hosting its annual event at the Buddy memorial Monument, located at Park Lane South and Myrtle Avenue from 6 p.m. to 9 p.m. That event will feature live music, soda, hot dogs and family friendly games.

The 104th Precinct, which serves central Queens communities like Glendale, Maspeth, Middle Village and Ridgewood, said it would be hosting its National Night Out Against Crime at 5:30 p.m. at Mafera Park, located at 65th Place and 68th Avenue. There, the 104th Precinct Community Council will be offering family fun events like food, music, dancing, raffle prizes, face painting and more. There will also be health screenings and public safety information at the ready, the precinct said.

The 106th Precinct of Howard Beach and other southern Queens communities said its annual event would be held at Police officer Edward Byrne Park, located at the intersection of North Conduit Avenue and 134th Street in South Ozone Park from 6:30 p.m. to 9 p.m. That event, the precinct said, would be offering the same kinds of family-friendly fun it offers each year, including public safety information, giveaways, rides and more.

The 112th Precinct, which serves Forest Hills and its surrounding central Queens communities, announced its Night Out event would be held at 6 p.m. on Aug. 5 at McDonald Park near Queens Boulevard and Yellowstone Boulevard. Some events on the list there included safety information, barbecue food, kosher food, a DJ, singing, dancing, tennis, karate, face panting, games, raffles and more.