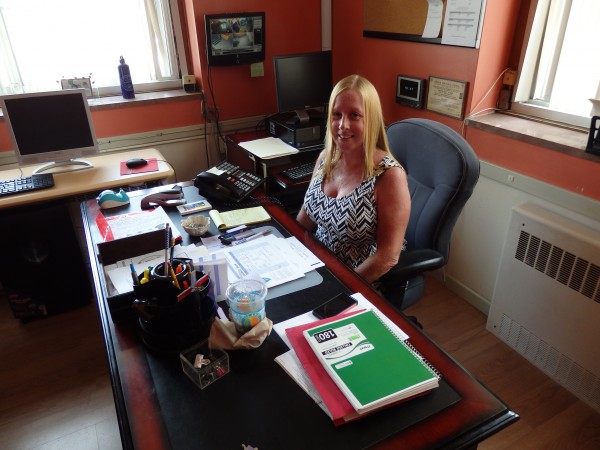 Marybeth McManus assumes the role as principal at Ave Maria Catholic Academy with a new set of goals. Photo by Phil Corso

With not even an entire week under her belt, Ave Maria Catholic Academy’s newest principal Marybeth McManus said she already has big plans for her first full-time school administrator role.

Looking ahead, the new principal said she looked forward to engaging students in community service and team-building exercises as she sets her roots in the Howard Beach community. As she becomes more familiar with the area, the administrator said she would be drawing on her extensive background in Catholic education to help establish herself in her new role for Ave Maria’s nearly 300 kids in grades pre-kindergarten through eighth.

“I always wanted to be a principal. I went to Catholic school my entire life,” McManus said. “I love the foundation and spirituality it helps the children develop.”

McManus succeeded former Principal Anthony Russo, who served the Howard Beach school for the past two years. She brought with her more than a decade of Catholic elementary experience with previous roles as a religion teacher, assistant principal and more.

“The board is especially pleased to have a professional with such a varied record of academic preparation and proven experiences agree to continue her ministry at the Academy,” said Robert Muccigrosso, chairman of the Ave Maria board of trustees. “We are confident she brings the energy and talents necessary to move the Academy forward in the right direction.”

The new principal said she would be zoning in on preparing students for Common Core testing while also putting a premium on community involvement and collaboration. McManus said she would use her own experiences as a member of the nonprofit Rockaway Women Inspired to Support and Help (WISH) group to hopefully inspire students to be selfless and assist others in need.

“This community reminds me a lot of where I grew up. It’s a very tight-knit community,” McManus said of her new Howard Beach home. “Everyone wants the best for the community and the schools.”

Some of McManus’s top initiatives, she said, included encouraging students to take up musical instruments and become more involved with after-school enrichment programs like art club, chess club, drama club, or even zumba club. It is through those kinds of programs where she said students could learn the intangible things not taught in the classroom.

“Enrichment programs are always big,” she said. “We want outside people to have an opportunity to come in and see what goes on in the school and the programs could help that.”

At her previous role in Forest Hills, McManus said she helped spearhead the student council, where students pitched different community service projects and events alongside area nonprofit organizations. She said she had sights set on groups like Pennies for Patients and Teens for Jeans to do just what their namesakes suggest – raise money or materials for those who need it most.

“The goal is to provide the children with a spiritual atmosphere,” she said. “We want to see the kids developing new skills every day.”