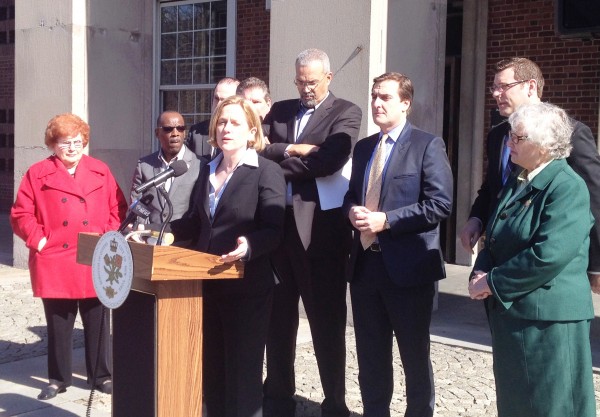 Weeks after their removal, six Queens Library trustees moved to sue Borough President Melinda Katz for what they believed was an unlawful removal from the board.

Katz chose to nix six members from the board, originally appointed under former Borough President Helen Marshall, late last month after the state passed legislation to revamp oversight of the library system after reports shined a harsh light on library CEO Thomas Galante, who earned a six-figure salary during a time of union jobs being outsourced.

The six defendants, Jacqueline Arrington, Joseph Ficalora, William Jefferson, Grace Lawrence, Terri Mangino and George Stamatiades, called their termination “a brazen, and unconstitutional, power grab by the Queens borough president, with the aid of the state Legislature, to transform the Queens Borough Public Library from an independent, private, nonprofit corporation into an organ of city government controlled by the Queens borough president and mayor,” according to court documents.

In the complaint, the former trustees said the library was established more than a century ago as an independent institution that Katz had abused for political gain.

“Katz set her sight on taking control of the Library for political use as she might see fit,” the federal complaint said. “Within six weeks of taking office she informed the Trustees that she would be pushing for state legislation to make them more accountable — to her.”

Mayor Bill de Blasio also removed two members of his own from the board – his former appointees Patricia Flynn and Stephen Van Anden – bringing the total to eight people removed before Aug. 1.

Katz, however, rejected the trustees’ appeal on Wedneday, arguing that new state law made way for her office to implement new reforms. Doug Grover, who serves as counsel for the six trustees with Schlam Stone and Dolan, said he was not surprised to hear of the borough president’s rejection.

“It’s one more reason the court must step in and halt the damage Ms. Katz has already done to the library and the further damage that would surely follow,” he said. “For more than a century, the library has provided excellent service to the community, free from political interference and favoritism. She wants to toss that aside, using an ill-conceived law that we believe is unconstitutional. The threat to the independence of the Queens Library should be of concern to every nonprofit group in New York and to every citizen.”

Both Katz and de Blasio’s decisions were applauded by borough and city officials in the hours following the decision, including city Comptroller Scott Stringer and Public Advocate Letitia James, arguing the move would create for more transparency in the system.

“I commend Queens Borough President Melinda Katz for initiating changes to the Queens Library board that I believe will be in the best interests of taxpayers, accountability and good governance,” Stringer said. “It is my hope that the information requested by my audit team will be made available without further delay.”

Reports showed Galante earned a roughly $400,000 salary while jobs were being outsourced and expensive construction projects were enacted. State Sen. Mike Gianaris (D-Astoria) first introduced the legislation back in April with help from Queens Borough President Melinda Katz, who has been a harsh critic of Galante.

Under the new legislation, the library must now file financial disclosure forms, put limits on outside employment and require an annual budget hearing along with a 30-day public comment period before it is adopted, lawmakers said.