It’s never too early for Santa to start loading his sleigh. 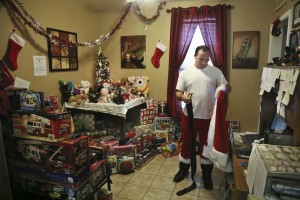 A toy drive called Secret Sandy Claus, started by Michael Sciaraffo two years ago after Hurricane Sandy, started to collect toys last week with hopes of bringing smiles to Sandy-stricken kids throughout the borough. It marked the third consecutive year the Santa-style savior was in operation, and Sciaraffo said he expects it to be bigger than ever.

For the second year in a row, the Brooklyn native teamed up with Pat’s Sport Bar of Middle Village, located at 73-13 Metropolitan Ave. to help push the project forward. The bar hosted a Christmas in August night earlier this mont  and asked all that attended to bring a toy for donation.

While Sciaraffo said he tries not to collect toys before the fall, a period that he calls “Santa’s offseason,” he was still very happy to have the support of the bar.

“We are very happy to have their support,” he said. “These are the relationships that we need to build to keep this program going every year.”

Sciaraffo said the whole idea started in the aftermath of Hurricane Sandy because he wanted to help those in need and organized a supply drive to collect and bring food, water and clothing to those who needed it. He started out by hanging up flyers around the neighborhood and ended up receiving a ton of supplies.

“It was a little overwhelming,” he said. “After that day I thought about what else I could do, and decided to have a toy drive for kids that lost their toys in the storm.”

Eventually, Sciaraffo said he spread the word in the same way on his first day collecting. Eventually, he ended up with 200 toys, and decided he would dress up like Santa Claus and bring them to the houses of those kids that were affected by Hurricane Sandy.

After news outlets heard about his cause, it continued to grow. Sciaraffo received not only donations of toys, but also those of food, water, clothing, supplies, furniture and more items that people in need coveted at this time.

He then created an online database so people could sign up for the items that they need and he would rent a truck weekly and bring the supplies to those people. It was around this time that Sciaraffo started collecting air conditioners and installing them for senior citizens.

“If a celebrity wants to dress up as Santa and deliver toys or show up to an event, it is great,” Sciaraffo said.

In the second year of the toy drive, he expanded to include all areas affected by Hurricane Sandy. Sciaraffo eventually recruited 200 volunteers, which he called his Santas and Elves.

Each affected location was stationed at a “North Pole” location, where they can store toys and keep a list of kids that registered for them, and is headed by a head elf, the program said. These locations held local toy drives, collected them, and sorted them for children in need. 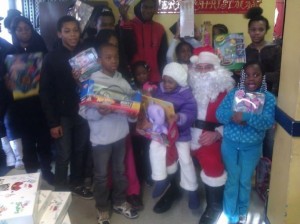 Last year, in total, this operation collected over 15,000 toys, and personally delivered to 3,000 kids in New York and New Jersey, Sciaraffo said. The other 12,000 toys were delivered in bulk to different shelters, churches and organizations.

Sciaraffo said once the name got out it really took off. Even an Oklahoma north pole was developed last year, which serviced children that were affected by the tornadoes.

“We had different businesses hosting toy drives, Party City donated costumes, and everyone wanted to help,” he said.

Looking ahead, Sciaraffo said he hopes his organization will continue to grow and lighten the burdens of both kids and their parents for holiday seasons to come.

“We have a lot of ideas of how we want to expand,” he said. “We hope to one day provide kids in need all over the country, or even the world, with toys.”