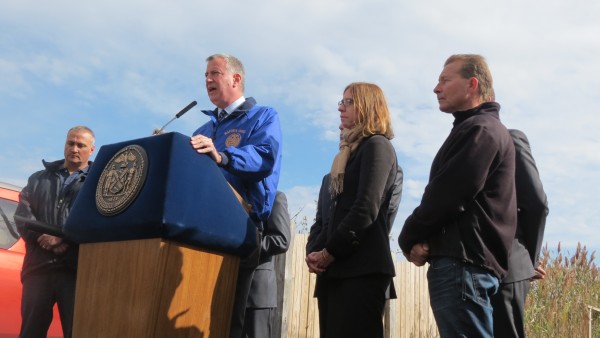 Mayor Bill de Blasio on Monday in Broad Channel raved about the progress of the Build It Back program since his administration assumed office in January. Photo by Michael V. Cusenza

Set against the backdrop of a cerulean sky fighting through blankets of cotton-ball clouds, Mayor Bill de Blasio on Monday talked about one of the city’s darkest Mondays two years ago, the day Broad Channel nearly drowned.

He talked about the Galimi family—John, Jayme and their five children—and their struggle to survive Superstorm Sandy and its aftermath.

“After the water subsided, they realized their home was gone,” de Blasio said of the family’s Cross Bay Boulevard abode. “You can only imagine the sense of despair.” And like so many Sandy victims, the Galimis found a second set of challenges after the storm, in the form of Build It Back inefficiency and bureaucratic red tape. 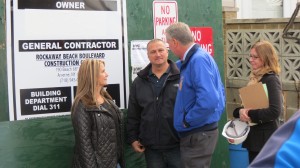 De Blasio huddled with the Galimi family in front of their future home on Cross Bay Boulevard.
Photo by Michael V. Cusenza

But as de Blasio announced on Monday, the Galimis are set to finally move back into their home before Christmas, thanks in large part to what the mayor called an “overhauled” BIB program.

“Now let’s face it, when I came into office and before this team was even assembled, it was quite clear that Build It Back was failing homeowners,” de Blasio said. “And, there had been no construction starts, there had been no reimbursement checks. A program that was supposed to help people in need had literally produced a zero and a zero. So we overhauled the entire system. We expanded the eligibility so, regardless of income, people could get help for a variety of needs. We provided property tax and water-bill relief for so many homeowners who were suffering. We streamlined the application process.”

The mayor went on to paint a “very, very different picture” of what he seemed to characterize as a reinvigorated BIB. Nearly half—6,400—of all homeowners who applied for help under Build It Back have now been made an offer of assistance, and 4,000 have accepted the offer; and 1,500 have started the design process, de Blasio noted.

He was effusive in his praise of the team he credited with revamping BIB—Amy Peterson, Bill Goldstein and Dan Zarrilli—and called the results they helped produce more than simply tangible.

“This is starting to change the lives of people who’ve been suffering,” de Blasio added.

While most saw the statistics as encouraging, some officials agreed that this is not a time to rest on laurels.

“While recovery is long overdue, thanks to Amy Peterson and other recent changes, the Build It Back program has begun to make progress in our Sandy recovery,” Assemblyman Phil Goldfeder (D-Ozone Park) said. “There is much more work ahead, but I am encouraged by the commitment and hope that Sandy recovery will remain a top priority until every family is safe and secure back in their own homes.”

“Progress announcements are nice, but the hard work that lies ahead in helping people needs to be highlighted as well,” he said.

De Blasio announced on Monday in Broad Channel that in order to address the work that still needs to be completed, he and his Sandy recovery team have set new goals based, in part, on prior achievement.

“By Dec. 31, we will hit at least 1,000 construction starts; meaning, from Jan. 1, 2014, to Dec. 31 we will reach a level of 1,000 construction starts—an additional 273 over our current number. By Dec. 31, counting the whole year, we will get to 1,500 reimbursement checks; we’re at 878 now, [so] we’re going to pick up over 600 more reimbursement checks that get to people by Dec. 31,” de Blasio explained. “We’re also going to add a whole new component to Build It Back: We’re going to dramatically expand the design and construction capacity so we can provide relief faster.”