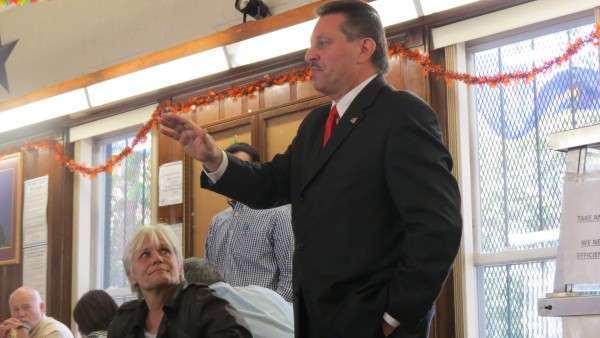 With the midterm elections less than a week away, state Sen. Joe Addabbo, Jr. (D-Howard Beach) is hoping that he can turn his three-term run in the 15th District into an even four.

Addabbo, 50, who served seven years on the City Council before being elected to the Senate in 2008, has the decided advantage of name recognition over his relatively unknown GOP challenger, Rego Park resident Michael Conigliaro, who was urged to run against Addabbo by City Councilman Eric Ulrich’s (R-Ozone Park) chief of staff.

Conigliaro noted recently at a public forum that if he hadn’t decided to run against Addabbo, then Addabbo would have been running unopposed; a concept that Conigliaro said ran counter to his belief that elections should always have an incumbent and a challenger.

During his three terms in office, Addabbo said he has consistently “been there” for his constituents when it comes to working towards reducing income taxes for the middle class, providing property-tax rebates for homeowners and renters, and passing tax incentives for small businesses to expand their workforce by hiring veterans, seniors and youth.

Addabbo also talked about helping residents and businesses during some of the borough’s darkest days—the aftermath of Superstorm Sandy.

“I was there for my constituents immediately after Superstorm Sandy, and I have continually advocated for the storm victims, [and] worked with FEMA, Rapid Repair and Build It Back to ensure residents get the services they need,” said Addabbo, who resides in Tudor Village in Ozone Park with his wife and two daughters. “That is something that will never change—I will always fight for Sandy victims until we are 100 percent whole.”

While Addabbo and his opponent may not see eye to eye on many issues, they do have some positions in common. For example, both the senator and Conigliaro, who manages a law office in Floral Park, agree that the state’s Common Core curriculum is in need of revamping; and both men also oppose the controversial homeless shelter proposed for Cooper Avenue in Glendale.

But when it comes to gay marriage, the two men are not on the same page. Conigliaro has said he opposes marriage equality, while Addabbo has most recently, in 2011, voted for same-sex marriage legislation, despite initially voting against similar legislation in 2009.

“I was there for my constituents during the state budget that cut wasteful spending and made our government more efficient and responsive to the people,” Addabbo added.

As far as other contentious issues, such as hydrofracking, the senator has said that “I have stood against the process of hydraulic fracturing since it was brought to my attention in 2009, and remain opposed to this practice for the detrimental effects are great and numerous in such states as Pennsylvania, which had adopted hydraulic fracturing operations several years prior.”

To that end, Addabbo cosponsored legislation to suspend fracking for the extraction of natural gas or oil, and prohibited the issuance of new permits for the drilling of a well utilizing the practice of fracking.

Additionally, the senator has said he has helped his constituents in working towards improved public transportation, including advocating for a permanent Rockaway ferry and working to find a solution to traffic problems on Woodhaven and Cross Bay boulevards.

Addabbo noted that he has shown his willingness to get involved in issues great and small across the 15th District, which includes—in whole or in part—Broad Channel, Elmhurst, Forest Hills, Glendale, Hamilton Beach, Howard Beach, Kew Gardens, Kew Gardens Hills, Maspeth, Middle Village, Ozone Park, Rego Park, Richmond Hill, Ridgewood, South Ozone Park, Woodhaven, Woodside and the Rockaways. For example, next month, he is bringing the Mobile Care Clinic to several locations in the district to provide women with low-cost and free mammograms and breast exams.

“With the support of my district, it would be a continued honor to serve them as a full time senator and be there whenever needed,” Addabbo said.