“As I have said, we cannot cut our way out of this crisis—we are facing a blow to our ridership greater than that experienced during the Great Depression,” said MTA Chairman and CEO Patrick Foye.

The plan includes devastating service cuts, a drastic reduction in the agency’s workforce and a continued pause on the historic $51.5 billion Capital Plan in the absence of $12 billion in federal aid.

The MTA presented a worst-case 2021 spending plan at its November board meeting that assumes no additional federal emergency relief. At the same time, agency officials have indicated that they are continuing their effort to secure $12 billion in federal funding. Should federal relief arrive, the MTA will make any necessary budget adjustments during 2021.

The November Plan includes favorable re-estimates from the July Plan as fare and toll revenues are projected to surpass the previous forecast by $319 million and non-labor expenses are projected to be lower by $295 million in 2020. Savings from vacancies—attributable to an MTA-wide hiring freeze—are expected to total $66 million. Debt service expense is forecast to be $31 million favorable in 2020, with savings through the remainder of the period covered by the four-year financial plan, while subsidies are slightly unfavorable through 2022, followed by improvements in 2023 and 2024. This brings the MTA’s projected deficits to $15.9 billion through 2024.

The MTA has taken aggressive measures to cut costs internally, focusing on three key areas: reducing overtime, consulting contracts, and other non-personnel expenses. Agencies have already begun implementing these savings, which are now projected to reduce expenses by $259 million in 2020, $601 million in 2021, $498 million in 2022, $466 million in 2023 and $461 million in 2024. 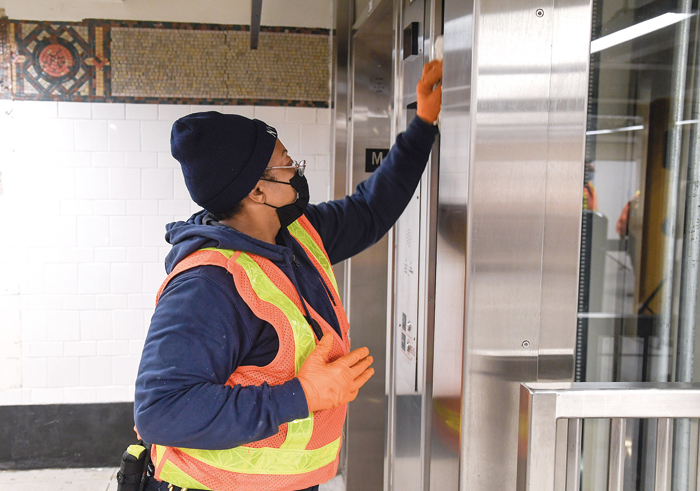 Photo Courtesy of Marc Hermann/MTA
According to the MTA, service reductions are estimated to have a workplace impact of nearly 9,400 positions.

In order to close the 2020 deficit caused by federal inaction, the MTA will have to use its authority to borrow the maximum of $2.9 billion from the Federal Reserve’s Municipal Lending Facility before the window closes at the end of 2020. The MTA is taking additional actions to address the 2020 deficit by releasing the current 2020 General Reserve of $170 million, applying the $337 million in the OPEB Trust Fund to current OPEB payments, and retaining Committed to Capital transfers in the operating budget at $187 million for 2020, $181 million for 2021, $120 million for 2022 and $114 million for 2023.

Subway service reductions of up to 40 percent may result in reduced train frequency, suspension of service on some lines at certain times of day, and/or major weekend changes. The reduction in service may allow for a 35 percent subway fleet reduction, generating savings in maintenance, cleaning and inspection costs.

The service reduction would result in the elimination of nearly 2,400 positions.

The MTA proposes to reduce bus service by up to 40 percent through elimination or consolidation of bus routes and reductions in frequency by up to 33 percent on the routes that remain. Changes to routes would ensure that service is available within a half-mile of existing stops.

The bus service reductions would result in the elimination of nearly 5,900 positions in total across MTA New York City Transit and the MTA Bus Company.

The MTA proposes to reduce commuter railroad service by 50 percent, which may result in peak period train frequencies of every 20 to 30 minutes along busier line segments, or hourly at less busy line segments. Proposed reductions under consideration take into account the existence of nearby alternate service and maintaining adequate service for essential workers. Off-peak and weekend service may be hourly, reflecting current ridership levels while maintaining sufficient service to prevent crowding.

The railroads’ service reductions would result in the elimination of a total of more than 900 positions.

“The MTA continues to face a once-in-100-year fiscal tsunami and this is without a doubt one of the most difficult and devastating budgets in agency history,” said MTA Chairman and CEO Patrick Foye. “No one at the MTA wants to undertake these horrific cuts but with federal relief nowhere in sight there is no other option. As I have said, we cannot cut our way out of this crisis—we are facing a blow to our ridership greater than that experienced during the Great Depression. We are once again urging Washington to take immediate action and provide the full $12 billion to the MTA.”

The MTA Board will be asked to vote to enact a new budget in December.

“Firing 9,000 workers and slashing 40 percent of subway and bus service would cost millions of New Yorkers several hours of commuting time each week and devastate the city for decades to come. Like never before, New Yorkers are counting on our congressional champions like Senator Schumer and Representative Jeffries to save public transit,” said Riders Alliance Executive Director Betsy Plum. “Failing to save transit at this pivotal moment is not an option. Should Congress fail to act, the MTA’s doomsday budget must be the absolute last resort. As Chairman Foye said, literally everything must be on the table. At the end of the day, Gov. Cuomo must do all he possibly can to safeguard our transit system and New York’s future.”