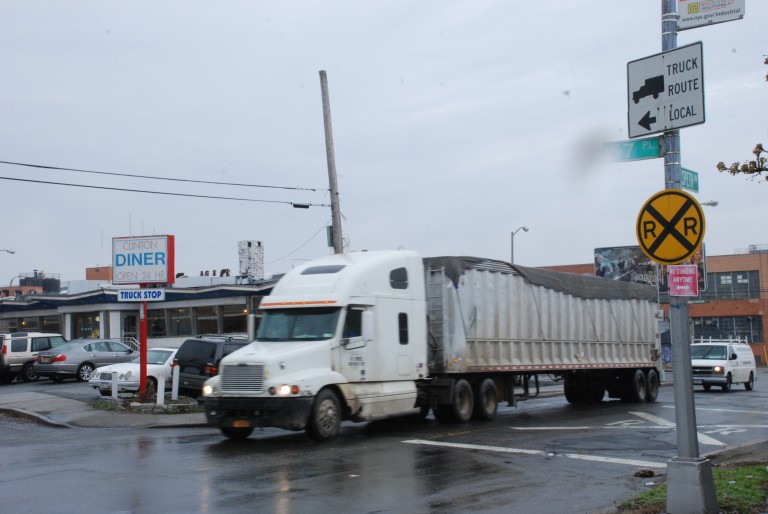 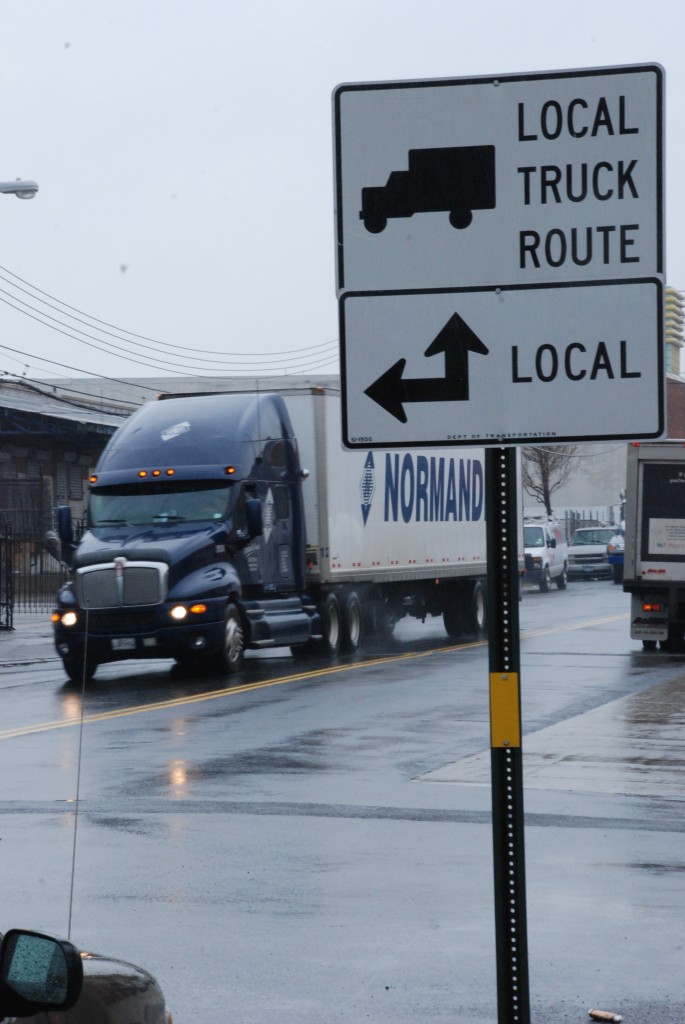 After several years of pushing the city for action, the residents of Maspeth may finally have some respite from trucks rumbling through the neighborhood to Brooklyn, but the streets won’t be entirely free of big trucks just yet.

Last month, the city posted signs that changed a truck through-route along Flushing and Grand avenues into local routes only. Last week, Communities of Maspeth and Elmhurst Together (COMET) President Roe Daraio and Board Member Christina Wilkinson gave a presentation on the city’s continued efforts to put the brakes on unruly trucks.

“We have trucks that aren’t local, from Long Island and Brooklyn and God knows where driving everywhere,” Wilkinson said. “If they don’t address that, then all the trucks are coming through our neighborhood.”

While Daraio noted residents’ complaints and concerns, Wilkinson gave a Powerpoint presentation highlighting what the city has done, and proposals yet to be completed. Wilkinson pointed out that the Department of Transportation Truck Study recommended investigating the Maspeth Bypass—the route along Flushing and Grand Avenues—in 2007. In 2009, U.S. Representative Anthony Weiner earmarked $579,000 for a study of the area, in which aerial photographs were used to determine the source of truck congestion and which streets were illegally used as through routes.

Daraio pointed out, after residents complained of trucks turning on small side streets and blocking intersections, that there will still be significant truck traffic in the area because local deliveries will still be allowed—the area is rife with shipping and industrial warehouses, as well as truck stops.

“If trucks originate in Queens, or if they have a delivery in Queens, they can still use the local truck routes,” she said.

Beyond concerns about noise and traffic, residents said that police hadn’t started enforcing the local truck signs. “We were promised that they were going to do enforcement on the first day, but when I went out to dinner there was a string of trucks coming through and no enforcement,” said Wilkinson.

According to Wilkinson, she was told by the 104th Precinct that police went out and didn’t see the new signs, so weren’t sure they were supposed to be ticketing truckers yet.

At the monthly COMET meeting on April 4, Community Affairs Officer Thomas Bell of the 104th Precinct said police will be increasing their presence in the area to assess the truck situation in the neighborhood and will begin ticketing trucks using the local bypass as a through route.

“Regardless of signs, every trucker is supposed to know the routes,” said Daraio.

Daraio said that route changes will be a problem for truckers, but that the city is doing this for the community. She said those worried about their own adjustment to proposed street changes should weigh their options.

“It’s going to take a while to get used to, but if we don’t [make the changes], we get the trucks,” she said.

Nick Diamantis, who owns the Clinton Diner, said the traffic changes could negatively affect businesses in the area.

“Making these one-way streets is going to make it hard for my customers to get to the diner,” he said.

Diamantis said the city shouldn’t change the flow of traffic, but should put a light at the five-way intersection.

According to Mike Armstrong, spokesman for Assembywoman Marge Markey, city officials told him it was too difficult to install a light because of the nearby train tracks along Rust Street. The process of putting in a light would require several city departments, federal support and the rail companies, he said.

“The process is just too long,” he said.

COMET is continuing to collect input from the neighborhood and submitting concerns and requests to the Department of Transportation. Subject to community feedback, the full changes to the streets and flow of traffic could be made as early as the summer of 2011.