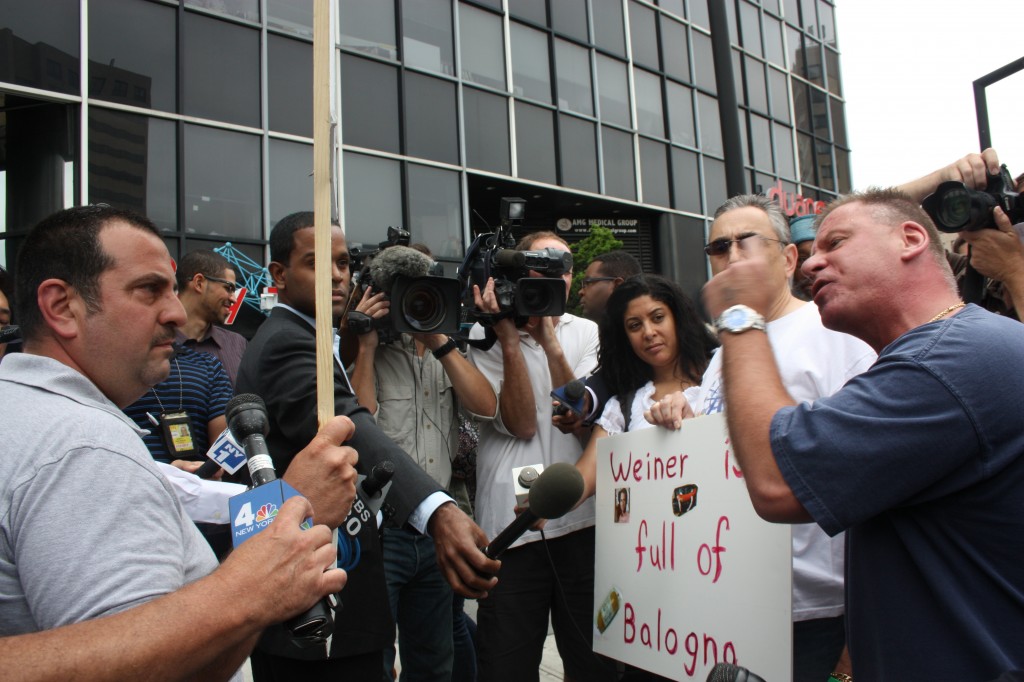 Dozens of constituents from every corner of Anthony Weiner’s congressional district staged a rally outside his Forest Hills office on Sunday, demanding his resignation.

“When you go and send Tweet photographs–naked pictures–to women across the nation that you don’t know and you’re a national figure, well that’s just plain dumb,” said Bob Holden, president of the Juniper Park Civic Association (JPCA) and lead organizer of the rally. “His judgment is not befitting of any public office. Anthony Weiner must resign.”

Those gathered in favor of his resignation were vehement in their expression of outrage over his lewd actions. “We’re not just ‘disappointed’ like Nancy Pelosi,” said John Alfieri of Mill Basin in Brooklyn. “We’re the people who have to live with the consequences of his [Weiner’s] bad judgment and questionable character.”

“Resign today, rehab tomorrow,” was one of the chants by residents from neighborhoods such as Bergen Beach, Howard Beach, Middle Village and Forest Hills. But no matter what part of the 9th Congressional District they came from, they held signs using different words but bearing the same message: Weiner must leave Washington.

“He has compromised his ability to bring effective service to this district or to function as a member of the United States Congress,” said Tony Nunziato, Maspeth community activist and JPCA member. “His actions affect the lives of more than 650,000 constituents. We don’t need to see tears on T.V. — we need to see him step away from the office we put him in. This is not Anthony Weiner’s seat. It’s the people’s seat. It’s our seat.”

Despite the fact that those calling for the congressman to resign on Sunday far outnumbered his supporters, a spirited demonstration ensued with repeated confrontational exchanges between opposing sides.

“He’s a liar. I could never believe anything that this man says,” argued Howard Beach/ Rockaway Republican District Leader Jane Deacy. Bergen Beach resident Jim Cafiero picked up where Deacy left off. “How do I know what else he had lied about?”

Weiner’s former high school classmate, Jim Sedaris attempted to counter as tempers flared. “Everybody’s lied at some point in their lives,” Sedaris screamed. “It’s so easy to abandon someone when they’re going through a hard time. He should not be convicted in the press. If he violated a law let him be convicted by a jury of his peers.”

The crowd protested for nearly an hour and circulated the most recent photos taken by Weiner with his cell phone, which were released by TMZ and show the congressman in a series of shots gradually reducing the amount of clothes he was wearing in progressive shots taken at the House gym facility in Washington D.C.

Brooklyn resident Kevin Hiltunen says he has dealt with Weiner on a number of constituent issues over the years. “He has never been about what we wanted or needed. Now, on top of that, he’s a disgrace. What he did is disgusting. He needs to leave and not come back.”

Whether Anthony Weiner will vacate his seat is still unclear, despite mounting pressure from inside his own party as well as from political opponents.

Along the Puerto Rican Day Parade route in Manhattan on Sunday, key political figures were asked about Weiner’s sexting scandal. One Democratic supporter, Charles Rangel, who was censured by the House last year for ethics violations, said of Weiner, “You know, even the best luxury cars, sometimes all the screws weren’t tightened.”