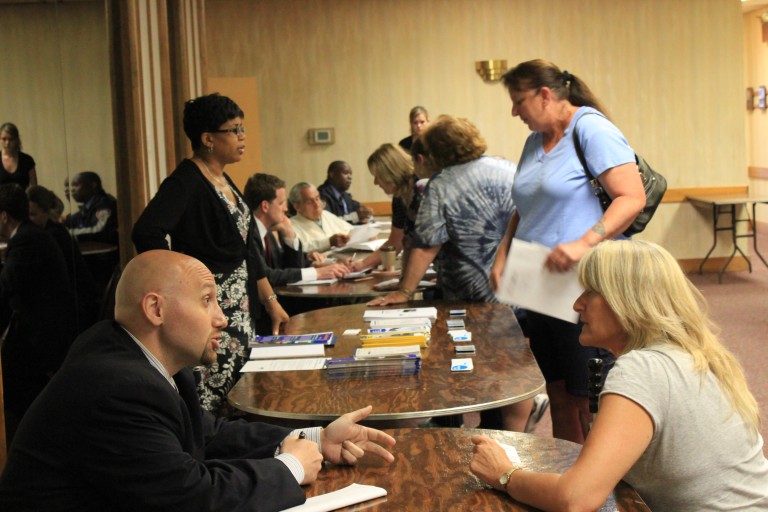 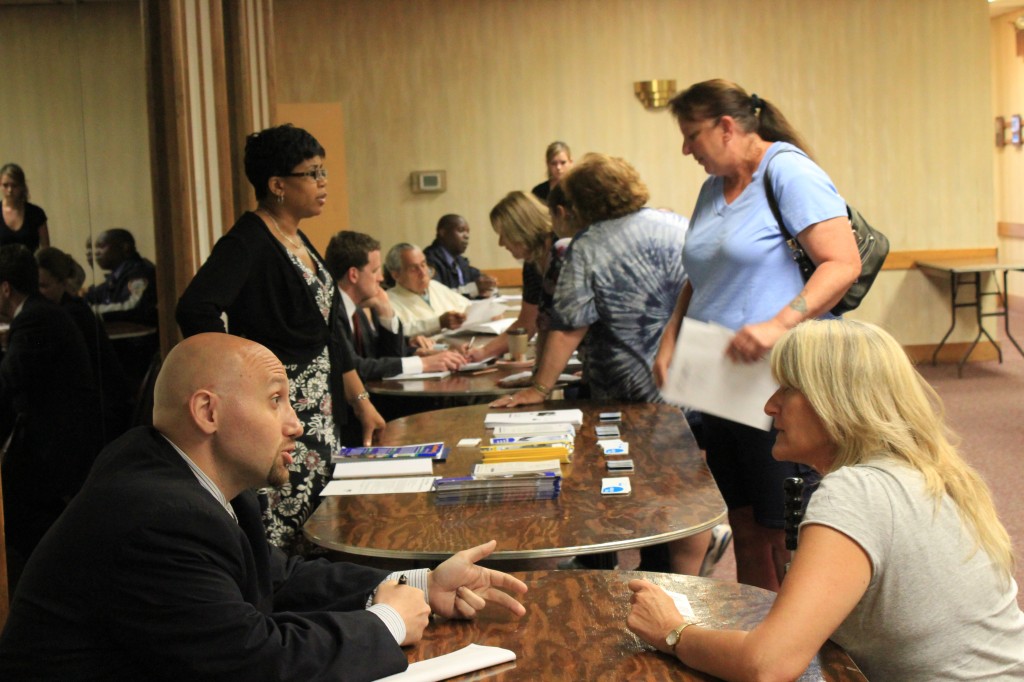 Richard Gundlach has been reporting a truck that sometimes hauls a refrigerated container for years; it parks outside his home near 51st Avenue and 72nd Streets, and the hum of refrigeration keeps him and his neighbors up all night.

On March 22, at the Kowalinski  Post in Maspeth, Gundlach spoke with Department of Information Technology and Telecommunications (DoITT) Director of External Affairs Nicholas Sbordone, who helped walk him through complaints online before a crowd of twenty to thirty area residents.

But Gundlach explained that after he reports the noise to 311, he receives a follow-up response that his complaint about “engine idling” was resolved. Further investigation led him to find that the police have come to his block, heard no trucks running, and closed the complaint.

And the refrigeration generator keeps on humming.

“I’m very specific when I call,” Gundlach said, “and what I get back is nothing like what I said.”

Sbordone explained that no category exists for Gundlach’s complaint. Refrigeration noise would be a Department of Environmental Protection matter, but since it’s from a vehicle the noise is under NYPD jurisdiction—and the complaint is logged as engine noise.

“There’s always going to be content that changes; there are calls we get that we never would have thought of,” Sbordone said.

He added that the online system is also not yet equipped to handle NYPD noise complaints online—those still need to be made, as Gundlach has done in the past, over the phone.

The community meeting, organized by Councilwoman Elizabeth Crowley (D-Middle Village), was set up to bring residents and city agencies together to discuss community concerns, but the night opened like a call to 311: residents were put on hold.

To begin the evening, Sbordone and two other representatives from the DoITT gave a presentation on using the 311 hotline and website.

According to Crowley’s Chief of Staff Lydon Sleeper, the event was supposed to pair residents with the agency best equipped to address their concerns, while DoITT gave their presentation.

However, the Kowalinski Post’s community room is poorly suited for simultaneous presentation and mingling. As a few residents spoke with various department representatives (such as Byron Munoz of the Department of Buildings and Community Affairs Officer Tommy Bell of the 104th Police Precinct), DoITT began their presentation and the nearly 30 attendees hushed those still chatting.

But focus on the presentation, which began with a painstakingly detailed account of the call volume and response on snowy January 27, was derailing the meeting.

An eight-minute tangent about barking dogs led to the revelation that the most common solution is simply a letter to the dog’s owner. To make matters worse, the letter might go to an absentee property owner, rather than the resident.

“We wanted people to meet directly with the agencies,” Sleeper said, standing outside the Post, 20 minutes into the droning presentation.

One resident, standing outside as well, said, “I’m not here to sit through a class, I’ve already seen enough PowerPoints in my life.”

As Gundlach was explaining his noise complaint, with most of the city’s representatives sitting idly by, Sleeper deftly stepped to the front of the room and invited people to stand up and visit with the various departments. “This is a good time to break off,” he said. “If you have any questions about 311, they’ll be here.”

Residents spread to the edges of the room to speak with the various departments, and Sbordone explained that the DoITT has several staff members dedicated to tweaking the system to accommodate new issues that arise and new ways to network with the city, such as the text-message platform launched in May, and their Twitter service, where they take complaints and questions in 140 characters or less.

While Crowley worked the room, helping residents figure out what department they should speak with, Sbordone said the system 311 is still growing.

For a glimpse of just how organic the system is, visit the official 311 blog at 311nyc.wordpress.com