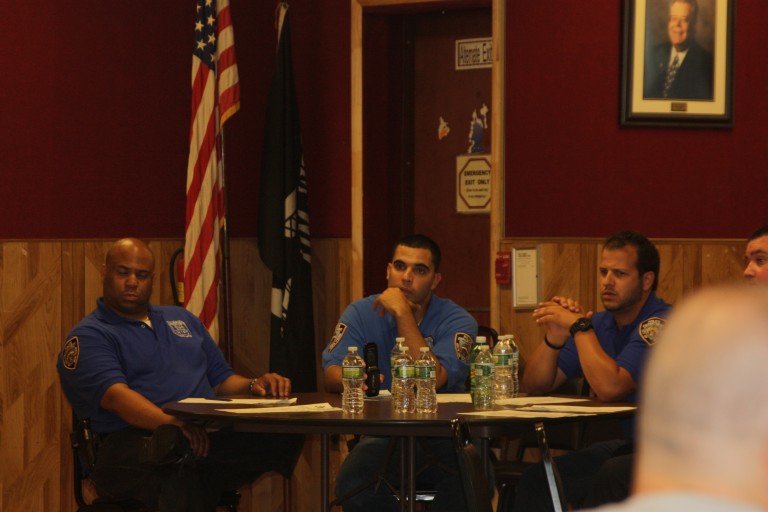 Concerned Woodhaven residents gathered at an emergency meeting of the 102nd Precinct Community Council on Tuesday evening to discuss a string of concerns raised at last month’s session.

The issues include unruly neighbors, incidents of gang-related graffiti and late-night problems at a local park. Three separate groups of residents who brought these issues to the June meeting showed up on Tuesday to find out if police have made any progress towards rectifying the problems.

“These people deserved to have an answer to their problems,” said council President Maria Thomson of the residents. “There were serious issues and we have all worked together to bring about progress and resolution.”

Residents of 98th Street, who have been living with what they called a “nightmare” home that has been illegally divided, reported that there has definitely been progress with their problem. One single-family residence on their block had been turned into a multiple family dwelling home to at least two dozen people.

Joe G., one of the block’s organizers, told The Forum that he spoke with the absentee landlord about the problems that the neighbors were experiencing. “I did the work to find where the landlord was and we got him to come up from Florida to discuss what was happening at the house.”

Other homeowners on the block said it was important that the landlord visited the home because he was not aware of everything that was going on with the house in his absence. “He’s agreed that things need to be done and promises to work on it,” said Joe.

The city Department of Buildings (DOB) inspected the site and issued an order of eviction for an illegal basement, along with other summonses pertaining to the illegal conversion of a single-family dwelling to a three-family dwelling.

Administration of Child Services (ACS) also visited the home to investigate reports from neighbors about unsupervised children in and around the property.

“Basically, we got to first base here,” said Joe. “There are still a lot of problems but we are very happy to say that something is being done. It will take a while but now there is a lot of hope.”

Residents offered a special thank you to Dorie Figliola of Assemblyman Mike Miller’s office and Sandy Doremus of Senator Joe Addabbo’s office, and to Maria Thomson and the Precinct Council for all of their help.

Another group of residents from 85th Street near 88th Avenue was on hand to heap praise on the 102nd Precinct for what they say is tremendous progress following a gang-related incident near their homes. Graffiti associated with the Latin Kings gang began to appear in the area last month near the home of a victim of deadly gang violence last year.

According to residents, the Latin Kings crown that was spray painted on a house was removed within one day of their reporting it at the meeting. Since its removal, the surrounding area has been quiet and graffiti free.

Only one problem – issues at Maurice Fitzgerald Playground on Atlantic Avenue near 106th Street in Ozone Park – was reported by area residents as not having been resolved. Neighbors say that the park is used long after its closing time and often throughout the night.

Homeowners at the meeting registered repeated complaints about basketball games, loud music and profane language, drug use and sales, drinking, broken bottles and public urination. Community Affairs Officers from the 102th Precinct were on hand to speak with the residents and offered reports on arrests made recently at the park.

One of the problems associated with the park is that the city Parks Department does not lock the facility at night, which the officers say makes their job much more difficult.

Both the Precinct Community Council and the Woodhaven Residents’ Block Association have committed to continuing their work with residents, elected officials and police to continue working toward a resolution.

The next 102nd Police Community Council meeting will be held on Tuesday, September 20 at 8 p.m. at the Moose Lodge on 118th Street off Jamaica Avenue.