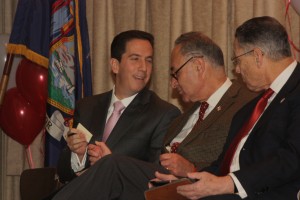 Yes there are jokes about his last name. And while it’s Goldfeder not Goldfinger, his fellow Democrats and residents of the 23rd Assembly District surely hope the area’s newest state representative has the Midas touch after winning the race for Audrey Pheffer’s old seat in a special election in September.

Y. Phillip Goldfeder was sworn as a New York State Assemblyman on Sunday afternoon before a crowd of about 250 people at MS 210 in Ozone Park. As senators, judges, council members, assembly colleagues, congressman, and mentors spoke of the 30-year-old father of two, they all seemed to share a common thread in their descriptions—enthusiasm.

But it was his most recent boss, Sen. Charles Schumer that sent a wave of laughter through the audience when he referred to Goldfeder as having “Shpilkes” the Yiddish word for ants in the pants.

The ceremonial swearing in was administered by Sen. Schumer as Assembly Speaker Sheldon Silver and Goldfeder’s wife and children joined him on stage. Immediately following the administration of his oath, Phil Goldfeder reminded his audience there was just one more speaker—him.

After thanking his family and his wife for always being there and in complete support of him, he spent much of his time speaking about how he looked forward to tackling his new job. He also paid special attention to the person who held the job before him, mentor Audrey Pheffer.

“I can never thank Audrey enough for her guidance and her confidence in me. I know I have big shoes to fill.” The Assemblyman then went on to talk about the future. “What I intend on doing now is doing everything that we talked about to make the 23rd Assembly District a better place during the campaign,” said Goldfeder. “We are going to work together to get everything accomplished.”

Following the conclusion of the ceremony, Goldfeder and his family hosted a small party in the school’s cafeteria.