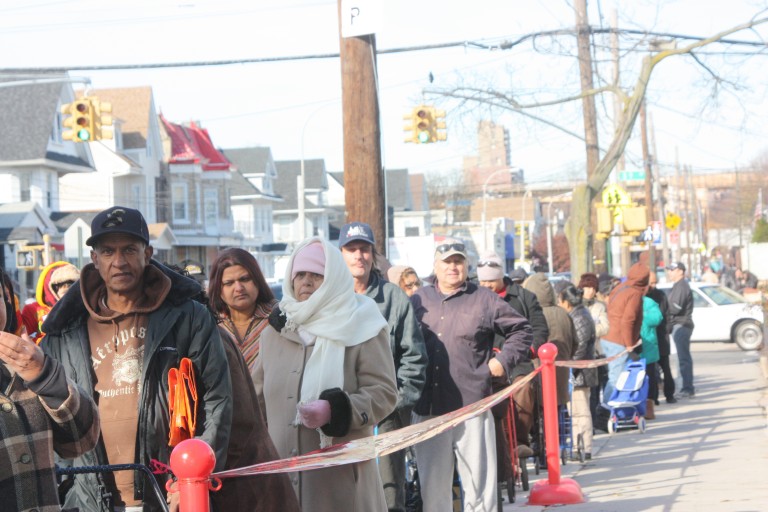 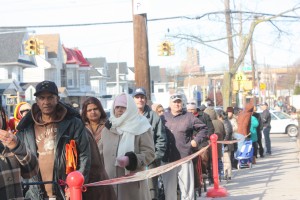 Handling hundreds of clients while managing dozens of on-site volunteers from the pre-dawn hours to midday can be enough to overwhelm anyone. Yet, Swami Durga Das, 63, executive director of The River Fund New York, Inc., manages to do it all with the efficiency of an accountant, the speed of a marathon runner and the grace of a party host.

The smile on Das’ face was immediate as he was greeted by one of hundreds of people on Saturday’s line being fed by the River Fund group on-site pantry service program at 89-11 Lefferts Avenue in Richmond Hill. Just one of those eager to say thank you and ask about his family.

Only a few minutes later, while speaking about how the group handled its mission to help the needy, he took a moment to answer questions from two other volunteers distributing food among the large line of clients — something he found himself doing a handful of times within only 30 minutes.

“I don’t know how he does it,” said Barry Rice, one of the River Fund volunteers. “He’s like Superman.”

As the nonprofit celebrates its 20th anniversary this year, despite a small staff and numerous funding cuts, the Richmond-Hill-based food pantry — whose mission is to feed and empower financially struggling people — has served more than 200,000 people in the last two years.

And its Client Choice Food Pantry — which, unlike similar facilities, offers needy clients the chance to choose what foods they need — continues to grow thanks to hardworking volunteers and a little bit of luck.

For Das, his desire to help those in need is the culmination of a lifelong journey sparked by the need to fit in. Of Italian descent and openly gay, Das said that his orientation created hostility towards him growing up.

“I think that had a big hand in how I went down this path,” he said. While in his 20s, Das travelled abroad and eventually came to meet a woman who would give his life much-needed direction — Ma Jaya Sati Bhagavat, a Brooklyn-born spiritual teacher who founded the River Fund and other groups devoted to helping others. Das studied with her for more than 30 years.

“She definitely had a major impact on me and how I see the world,” he said.

In 1991, after leaving his job at a city-based agency, Das brought cookies made by his niece to dozens of patients living with HIV/ AIDS at the Terence Cardinal Cooke Health Care Center in Manhattan.

With the help of a few friends, he later made sandwiches for them during another visit. From there, Das said, things took off for the nonprofit.

And as it continues to grow, the nonprofit is looking to add financial assistance programs to help struggling clients seeking economic help for other expenses and needs.

The River Fund has accumulated several civic honors over the years, including the Certificate of Honor from the Borough of Queens and several awards from the Food Bank of New York City, including the Community Service Excellence Award.

When asked if he ever thought about how much the nonprofit has grown since that seemingly simple act of baking cookies for the sick 20 years ago, Das laughed.

“I didn’t realize that we were doing this for 20 years. I don’t think like that because I’m here, I’m in the moment, and we’re trying to keep up [with the community’s needs], so it’s never something that I think about,” he said.

It was Richmond Hill resident Celeste Johnson’s first day visiting the River Fund’s Client Choice Food Pantry last Saturday. Like many in this economy, Johnson, a mother of four children, said that financial hardships have forced her to seek assistance from similar food pantries.

The major difference between the Richmond Hill group and others, she said, could be seen in her cart, which contained fresh green apples, onions, fruit juice and a variety of other healthy foods.

“I still want my kids to be able to eat healthy and to have something nutritious,” she said. “A lot of the other places I’ve been to don’t really give you a choice; they just say, ‘Okay, you’re getting this, this and that.’ But here, you have a choice. They ask you what you need, and that’s important.”

Choice, said Das, was a key part of what makes his food pantry, which distributes food every Saturday from 9 a.m. to 11 a.m., so unique. Thanks to the assistance of more than 50 sponsors, including Trader Joe’s of Rego Park and City Harvest, the nonprofit is able to provide more than 22 tons of products to its average of 8,000 clients that line up for help on a monthly basis.

Products are selected according to the pyramid recommendations of balanced nutrients for adults, children and special diet needs. Yet, while basic foods such as meat, bread and chicken are provided, there is also a special emphasis on providing fruits, healthy snacks and vegetables. Even tofu is among the selection.

The reason for this, Das said, was because the nonprofit strives to provide people with not just the basics, but with a choice of what they need.

“People shouldn’t be forced to eat something that they don’t need or want,” he said. “Take me, for example — and I get this all the time — I’m a vegetarian, but we serve meat. People ask me all the time, ‘How could you serve meat and be vegetarian?’ Well, just because I don’t eat meat doesn’t mean that someone else shouldn’t.”

Volunteer Barry Rice, also an employee for the city, said that groups such as River Fund mean a lot to the local community, especially considering the dire conditions the people they serve face because of the still-struggling economy.

Sadly, he noted, a crowd such as the line that went around the block of Lefferts Boulevard last week was something he had become used to seeing.

“This time of the year it’s always like that. At the moment, the despair of society with jobs being cut, rent sky high, folks are really in despair,” he said. “I deal with a lot of folks like these in my day job. At the moment, the temperament of the public is not at a good level.”

November’s jobless rate has been particularly high in the last two years, with approximately 100,000 people without jobs in November 2009 and about 90,000 unemployed last November — a jump of more than 30,000 compared to the 60,000 Queens residents unemployed in Nov. 2008.

With such staggering numbers, it’s easy to assume that many of those the nonprofit serves fall under the stereotype of being so-called lower class. Not so, said Das; he has seen an uptick of middle class folks from around the area coming to his pantry.

Das recalled one woman who was in line recently.

“She was well-dressed, and to someone who was walking down the street, she would seem like she was the last person you would expect to need anything,” he said. “And yet, she needed food, blankets and several other essentials. That’s the kind of thing we’ve been seeing lately, too — how people that could be or look like they’re middle class are struggling just as much as other people.”

For that reason, Das said his group opens its doors for all those who need it. Operating through a specialized carding system, people registered with the group in line for food display a card that tells volunteers the number of people within a household, how many children, adults and seniors, whether they use food stamps and if anyone is disabled.

The system, he said, helps volunteers keep track of what the needs are for the households they serve, which is quite a number in and of itself.

They serve clients from across Queens, including Richmond Hill, Jamaica, South Ozone Park, and Ozone Park, as well as Coney Island in Brooklyn. The River Fund served approximately 101,020 people — most of them children and youths, roughly 39,530, and 19,459 seniors — in 2010, according to figures provided by the nonprofit.

So far, the group is on pace to eclipse that number, having served roughly 112,000 people this year — only 2,000 short of how many people they projected to serve this year.

As Das points out, a group like the River Fund is only as strong as the people behind it.

For volunteer Dave Yankanah, of Richmond Hill, being part of the River Fund serves as an extension of the principles of helping his fellow man that he learned back in his native country of India.

“Indian culture is all about giving back, giving a hand to someone who needs it, and that’s what the River Fund is all about, as well,” said Yankanah, who joined the nonprofit after hearing about it from a friend.

With two children of his own, Yankanah hopes that his children will some day follow his lead by becoming part of groups such as the River Fund.

Children, Das notes, are one of the biggest focuses of his organization, not only in the programs tailored for them, but in the volunteers that make up the group.

Mobeen Mian, 12 of Richmond Hill, has been with the program during the weekends for the last six months, one of the dozens of volunteers who were up since dawn last Saturday for the group’s pre-holiday pantry service.

His own mother having received help from the nonprofit in the past, Mobeen feels a connection with the people he helps every weekend. When asked why he loved volunteering with the program so much, Mobeen said that it was all about helping.

“It’s a good feeling to be able to help out people in need, because when I turn on the television and see so many people starving, it’s a sad thing to see,” he said.

For Carmita Guaman, 15, of Richmond Hill, while she loves to be able to give back to those in need around her local community, she also enjoys the company of her fellow volunteers.

At no time was this more prominent than in the closing hours of the day, when Carmita and the volunteers lined up for a picture commemorating Saturday’s work, joking with and ribbing each other as they got together for the picture.

“I’ve definitely made a lot of friends here,” said Carmita, who has volunteered with the group for one year. “We’re like one big family.” For more information on the River Fund New York, Inc., visit the nonprofit’s website at www. riverfund-ny.org. 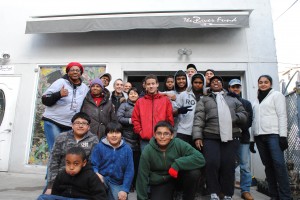