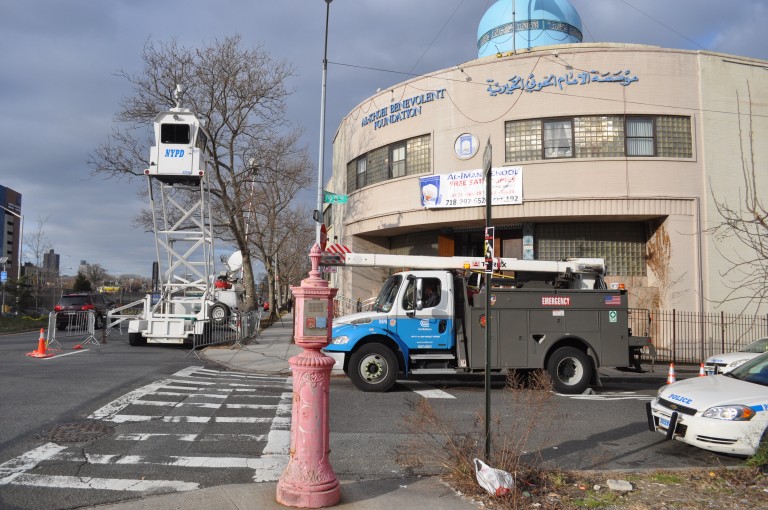 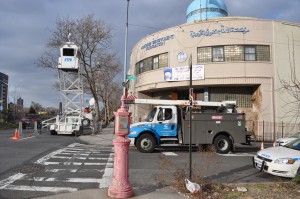 Imam Al-Khoei Foundation, at 8989 Van Wyck Expressway, was part of five firebombing incidents that happened on the night of New Year’s Day. Police identified Ray Lengend as the suspect who was seen throwing Starbucks glass coffee containers with incendiary contents into the Jamaica- based Mosque.

Police arrested a Queens man Tuesday who confessed to several fire bombings around Queens and Long Island on New Year’s Day night that resulted in a religious center being attacked and a home being severely damaged.

Ray Lengend, 40, of 215th St. in Queens Vil- lage, confessed to hurling Starbucks glass coffee containers with incendiary contents at five areas on Sunday and escaping in a grey-colored car.

After bringing Lengend, an unemployed truck driver, in for questioning following a police stake- out on Tuesday, police sources confirmed to The Forum that Lengend subsequently confessed to the firebombing incidents. Lengend has been charged with five counts of criminal possession of a weapon and five counts of arson.

According to various media reports, Lengend apparently told police that he had personal vendettas with each of his targets.

The first incident was reported around 8 p.m. on Jan. 1 at a bodega at 179-46 Hillside Ave. in Jamaica, where Lengend was allegedly seen hurling a glass firebomb through the window. However, the device did only minimal damage to the store. Several news sources reported that Lengend had apparently singled out the bodega after being thrown out of the store for attempting to steal a carton of milk.

The next incident occurred at a private home on 107th Ave., which is owned by an African-American family. Police said the home suffered extensive damage due to the firebomb being hurled through one of the windows, and left the owners essentially homeless until further notice. The Daily News reported that Lengend was apparently trying to torch the home of an unidentified crack dealer on that street, but hit the wrong address.

The third firebomb was reported at the Imam Al-Khoei Foundation at 8989 Van Wyck Expressway. The Queens branch of the foundation is part of an international organization—established in 1989 with branches in London, Paris, Montreal, Islamabad, Mumbai and Karachi—that operates Islamic and community centers, as well as Muslim schools, colleges and universities worldwide. Lengend told police that he had targeted the center after being denied access to their bathrooms, several media reports stated.

Lengend had also been linked to a fourth firebomb at a private home on Glafil Street in Elmont the same night. Newsday reported that Lengend had apparently been in a dispute with an in-law who lived at the home.

The fifth and last incident took place at a private home on 170th Street, home to a Hindu family where police say some religious-oriented ceremonies are conducted. No damage was reported as the incendiary bottles appeared to have fizzled out before they could cause any damage.

Muhsun Al-Dina, director of educational services for the foundation, told The Forum that no one was injured as a result of the firebomb attempt Sunday night. Al-Dina said that Sunday’s incident marked the first time that the foundation’s Queens branch had ever faced such an incident, which he found “puzzling and mystifying.”

Al-Dina noted that in light of the other incidents that took place on Sunday, which appeared to follow a pattern of targeting racial or religious groups or individuals, he would not have been surprised if the pattern of fire bombings turned out to be hate-motivated crimes.

“This might be more than a coincidence,” he said. “We just thank God that there was no personal injury that happened here.”

Police were still investigating the possibility that the Jan. 1 incidents were hate crimes as of Tuesday. However, The Daily News reported, Lengend had apparently made “broad anti-Muslim statements” to detectives while in custody.

No word is available yet from police on whether Lengend will face hate crime charges following his arrest.

On the foundation’s website, al-khoei.org, the following statement was posted Monday in regards to the Sunday incident: “We thank Allah (SWT) that no major damage or injury was caused by the blast. The Foundation reiterates its resolve to continue to serve the community and to strive to bring love where there is hatred, light where there is darkness and enlightenment where there is ignorance.”

Since the New Year’s Day incidents, police sources confirmed that patrols have increased around Queens, specifically around places of religious worship; there is no word yet on how long those patrols will last, but police are hoping to at the very least deter similar incidents from occurring again. Police were also making community visits once to twice daily in certain areas.

“Queens is America’s most diverse county. We have a rich history and pride ourselves on being home to the Flushing Remonstrance, a precursor of the Bill of Rights found in our country’s Constitution,” said Marshall in a statement. “We are the birthplace of religious freedom and cannot tolerate attacks like those which took place on Sunday night.”

“We are grateful that the police are quickly investigating this, on a weekend that was supposed to be a happy start to a new year,” Liu stated.