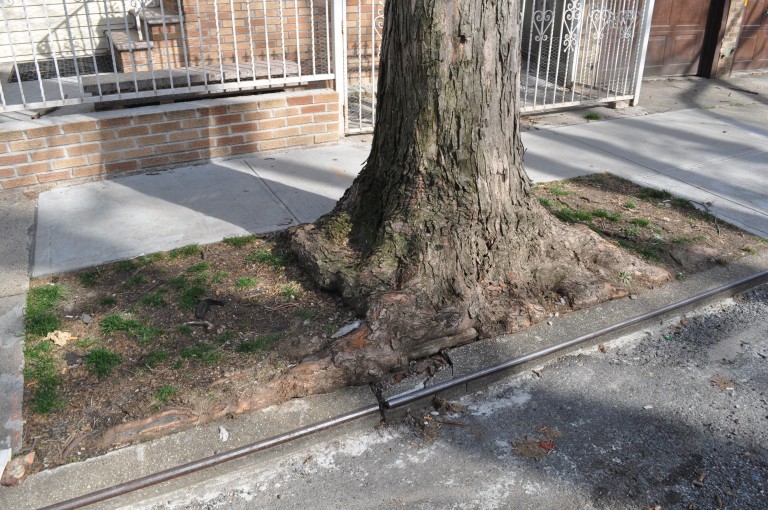 This sidewalk and tree pit on 85th Street in Woodhaven is one of about 317 spots that will be repaired, now that Councilman Eric Ulrich pitched in more than $1 million to fund the project.

After hearing many complaints from residents, a local city councilman has pitched in a large amount of money that will see repairs to areas right outside of people’s homes.

Councilman Eric Ulrich (R-Ozone Park) announced at a local meeting on Tuesday, March 6th, that, starting on Monday, March 12th, residents in Ozone Park, Richmond Hill, Howard Beach and Woodhaven will get free repairs to the sidewalk and tree pit areas right outside their houses.

About 317 spots will be fixed and it’s all paid for by the city council, costing $1.1 million in total, according to the Department of Parks and Recreation.

Ulrich said at the Our Neighbors of Ozone Park meeting last week that the sidewalks in those areas has been a tripping hazard for people in those areas and these repairs will fix that problem. He added that the city paying for construction also alleviates residents from having to pay for the repairs.

“They can’t afford it and why should they?” Ulrich said at the meeting. “I think the city should pay to fix every sidewalk, I don’t think homeowners should have to pay for property that they’re not responsible for.”

According to Ulrich’s office, the order in which Parks Department will do the repairs depends on the rating it gets. On a scale that goes up to 100, with 100 being the worst, the areas that it rates as having the most damage will be fixed first and it will go down the list from there.

In the most updated list of people getting repairs provided to The Forum by Ulrich’s office, two areas both got an 84 rating. One is in front of a residence at 85th Street in Woodhaven and the other, at a house on 74th Place in Richmond Hill. One sidewalk on 77th Street in Ozone Park got a rating of 87.

To get on the repair list, people contacted either their local city councilman, in this case Ulrich, or called the Parks Department itself.

According to Ulrich, the repair project should take about six weeks to finish from the time it starts.