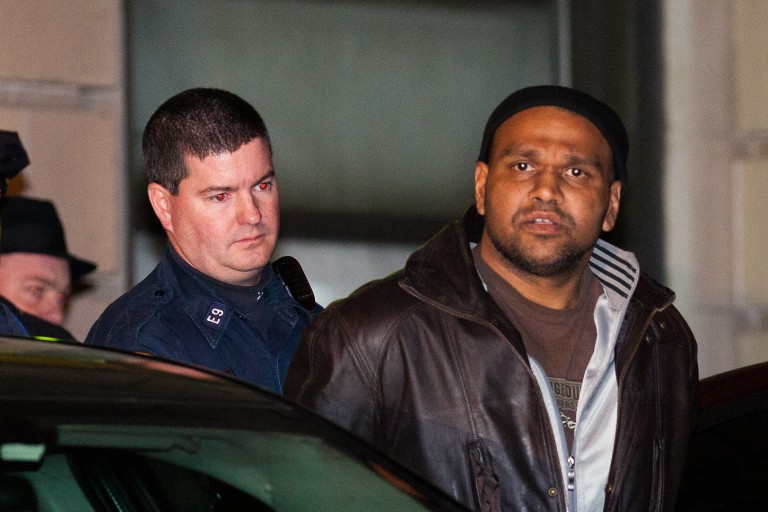 Ray Lengend was arrested by the NYPD in January. File photo.

The Queens man accused of firebombing six locations on New Year’s Day has now been indicted, facing three-dozen charges in connection with those arson incidents.

Early in the morning, on Monday, March 19, Ray Lazier Lengend, 40, of Queens Village was indicted in Brooklyn Federal Court, facing a lengthy 36-count indictment stemming from when Lengend allegedly threw glass bottles filled with gasoline at five buildings in Queens—two of which were religious houses of worship—as he drove around Queens in the evening of Jan. 1.

The charges facing Lengend, also referred to as ‘Suraj Poonai’ in the indictment, include arson as a hate crime, grand larceny, criminal possession of stolen property, reckless endangerment, endangering the welfare of a child and criminal mischief—and that’s just the short list.

The lead charge, arson as a hate crime, carries a penalty of 25 years to life in prison; if convicted of all charges, Lengend could face a maximum life sentence.
The tale of Lengend’s Molotov Cocktail spree paints the picture of a night gone wrong, with each of the five locations targeted chosen by Lengend due to a personal vendetta he had against them.

Investigators have determined that Lengend’s bombing spree began in the early evening of Jan. 1, when he drove a silver Buick Regal with Virginia license plates—which had been stolen from JFK International Airpor—to a gas station at the intersection of Van Wyck Expressway and Hillside Avenue; there he purchased five Starbucks glass coffee bottles. From there, he drove to a nearby Van Wyck Expressway gas station and filled the bottles with gasoline.

According to the U.S. Attorney’s Office in the Eastern District of New York, Lengend’s first strike happened around 8 p.m. that night, during which he entered a local convenience store, Hillside Deli, on Hillside Avenue in Queens.

The Queens Village resident allegedly threw a flaming bottle inside the store—targeted because they had caught him attempting to steal a bottle of milk and a Starbucks Frappucino, a store employee previously told The Forum—and fled. No one was hurt.

His second target, a home on 107th Avenue, was more successful, causing enough fire damage that the family living inside was forced to evacuate the home.

Lengend’s third and most prominent target was the Iman Al-Khoei Foundation mosque in Jamaica. In the indictment, federal prosecutors accuse Lengend of “knowingly and willfully” attempting to harm the mosque’s members, congregators and officials by hurling one of the explosive devices at the door of the building during a service held that night – attended by 80 people, mosque officials previously estimated. The indictment further alleges that Lengend singled out the mosque due to their religious affiliation, with his goal being to injure or kill Muslims and Arabs. It was earlier reported that Lengend had also targeted the mosque because officials there had refused to let him use their bathrooms.

No one was hurt in the attacks.

Lengend’s fourth attack, and the last in Queens, occurred when he hurled one of the Molotov cocktails at a home on 170th Street, which is also a Hindu temple, and caused a fire on the lawn. The fifth and final attack came on a home in Elmont, where Lengend threw one of the exploding bottles at a home occupied by what previous media reports stated were his in-laws.

Lengend was arrested on Jan. 3.

In a statement released by the U.S. Attorney’s office Monday, Loretta Lynch, U.S Attorney for the Eastern District of New York, stated that Lengend would be prosecuted to “the fullest extent of the law.”

“This defendant allegedly sought to fan the flames of ethnic and religious tension. Those flames will always be extinguished by the rule of law,” stated Lynch. “We are deeply grateful to the Queens District Attorney’s Office and the New York City Police Department for their investigation and coordination in this matter.”