The New York Landmarks Conservancy has announced the winners of the 22nd Lucy G. Moses Preservation Awards. Newtown High School in Elmhurst and the TWA Terminal at JFK International Airport are two of the recipients that will be recognized at an April 25 ceremony at the New York Historical Society.

“The awards are a celebration of outstanding restoration projects throughout the city as well as some extraordinary individuals,” said Peg Breen, president of The New York Landmarks Conservancy.

Newtown High School, in Elmhurst, has been in operation at this location for over 100 years and occupies an entire city block. The oldest portions date to 1921, and were designed by famed Superintendent of School Buildings C.B.J. Snyder in a Flemish Renaissance Revival style. Snyder’s choice of this style demonstrated his awareness of New York’s, and particularly Elmhurst’s, beginnings as a Dutch 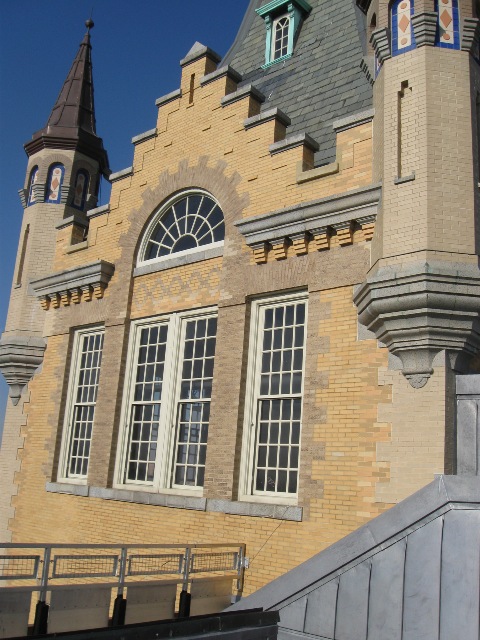 colony. It was designated a City landmark in 2003.

Snyder’s design features a dramatic 169-foot tower that is visible throughout the neighborhood and gives the school its slogan: “We Tower Above the Rest.” On the tower, deteriorated turrets were rebuilt to match original brick and terra cotta. Copper on the new turret roof now matches the main cupola.

Polychromatic murals were restored with new terra cotta, which involved extensive restoration procedures. Graffiti remnants were erased and up-to-date treatments applied to prevent future abuse. The 2011 renovation was completed under the auspices of the NYC School Construction Authority.

Eero Saarinen’s TWA Terminal at JFK International Airport has been an icon of modern architecture since it opened in 1962. While the Terminal was an experiment in aviation technology incorporating the first use of jetways and baggage carousels, the building itself is a structural marvel: four concrete lobes are in perfect balance, supported by only four piers.

The airline industry quickly outpaced the unique Saarinen design. To accommodate demands of capacity, security, accessibility and passenger amenity, the Terminal underwent unsympathetic alterations and additions. During the 1990s, TWA was not able to maintain the building, and it was closed.

In 2002, a program was enacted to stabilize and secure the building. The restoration started with archival investigations, interviews with surviving design team members and materials analysis. The Terminal was listed on the National Register of Historic Places and documentation completed prior to construction.
Improvements were made to the exterior, the concrete was repaired, and asbestos was removed. Skylights separating the four concrete shells — which have leaked since the 1960s — were replaced.

The public areas were restored, incorporating life and fire safety improvements, so the Terminal may re-open to the public, for a passage to the JetBlue Terminal, and for special events. On the interior, the sunken seating area was restructured and new banquettes and benches installed. Enhanced lighting dramatically illuminates the interior. A new accessibility lift, emergency lighting, fire alarms and a smoke detection system were incorporated into the restoration. Finally, the original “Solari” information boards were redesigned and reactivated. The most challenging part of the project was the restoration of the ubiquitous “penny tile” interior finish. Once sourced, over three million pieces were produced for use in this project and to have on hand for future restoration.