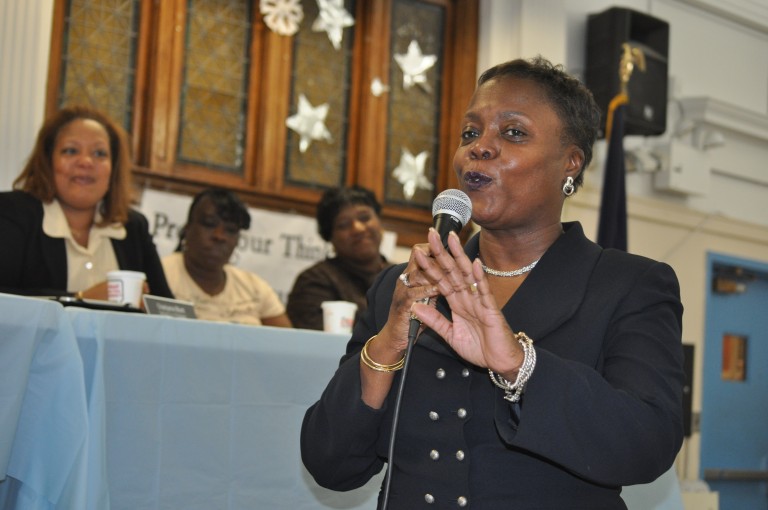 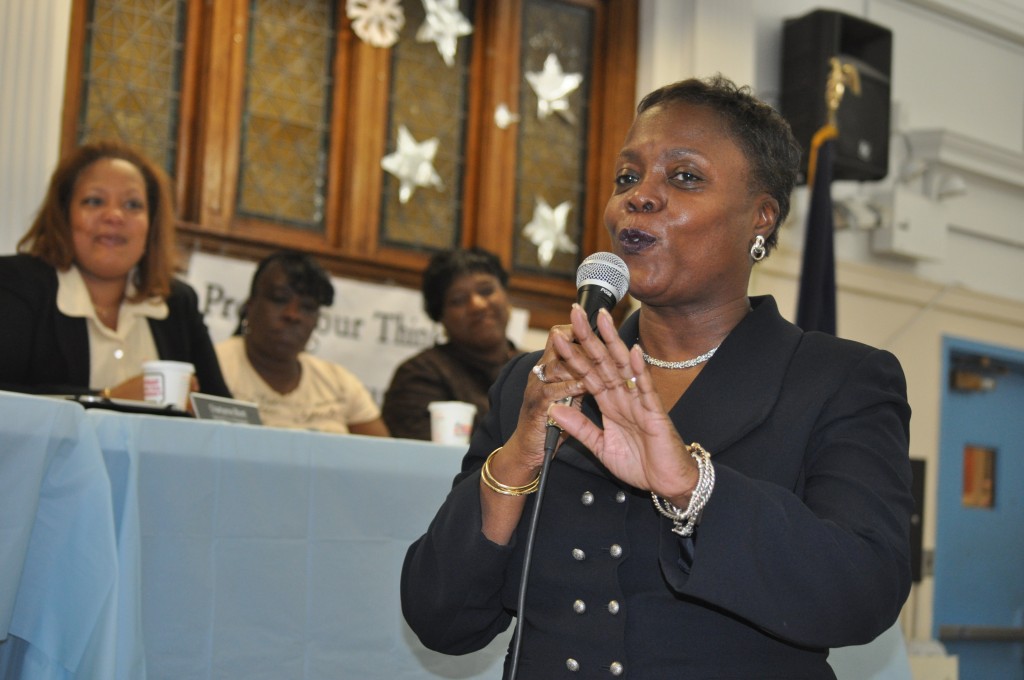 P.S 254 Principal Naomi Drouillard thanks Community Education Council 27 after they voted for P.S 254 in Richmond Hill to be renamed P.S. 254 – The Rosa Parks School at their monthly meeting on April 16th. Drouillard said that she was honored that her school will be named after African-American civil rights activist Rosa Parks. Forum Newsgroup Photo By Luis Gronda.

Members of Community Education Council 27 (CEC) discussed changes to how special education will affect the way a child with special needs will learn in school at their latest meeting on Monday, April 16.

Michele Lloyd-Bey, the community superintendent for district 27, presented the special education reform plan to CEC members and residents, which will affect all schools citywide. She spoke about the plan as how it affects district 27, which covers Richmond Hill, Woodhaven, Ozone Park, South Ozone Park, Howard Beach and the Rockaways.

According to Lloyd-Bey, the reform will focus on the following components: holding special needs students to high academic standards; equality of access to schools and classrooms for children with special needs, aiming to put children with disabilities in the same classroom as those without whenever possible; providing them with the special education services that are needed and while allowing them to attend their normally zoned school.

She also said that a child’s Individualized Education Program (IEP), which is the special education plan that is designed to meet the needs and services of a student with a disability, will become more significant under the reform plan. Parents will be more involved in designing the IEP for their child and it will be checked on throughout the school year.

“It’s not going to be a document that you just write and you put down and you revisit it at promotion time when you see the modified criteria the child has,” Lloyd-Bey said.

According to Lloyd-Bey, national research shows that the more time students with disabilities spend in a general education classroom, the higher their scores on standardized tests are. She also pointed out that the performance of students without disabilities isn’t affected by a child with special needs being in the same classroom as them.

The special education reform will also allow students to get the services they need at the school closest to where he or she lives, even if that school does not currently offer whatever service needs to be accommodated. Prior to the change, a student would have to enroll or transfer to another school that met their needs, which may or may not be far from their home.

“If Johnny is zoned for that school, if Johnny wants to go to that school and it’s their choice school, Johnny will get in,” said Lloyd-Bey, referring to a hypothetical example of how the reform will change a students’ choice of school. “The services will have to be modified for Johnny, not the program.”

Coralanne Griffith-Hunte, president of CEC 27, said that there have been a lot of children in District 27 that, between kindergarten and sixth grade, had to go to about four to six different schools and that isn’t consistent for a child that needs a stable learning environment.

“I think it’s time that those children are accommodated,” Griffith- Hunte said.