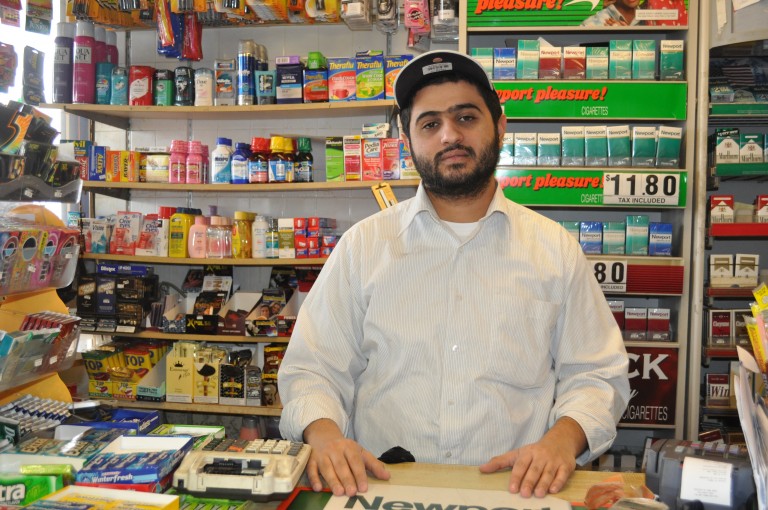 Jimmy Jobah, a cashier at Fine Food Market & Deli, said the DOT’s decision to convert Liberty Avenue back to a two-way street will be a positive for the business. Forum Newsgroup Photo by Luis Gronda.

In a reversal of a decision made nearly two years ago, the Department of Transportation (DOT) has made a directional change that is sure to be welcoming news to store owners in Ozone Park.

Store owners in that area have complained that business has decreased since those changes were made because there is less traffic on 93rd Street and Liberty Avenue, as the barrier blocks drivers from making a left turn onto Liberty Avenue coming off of Cross Bay Boulevard.

Fabian Niaupari, owner of Terranova Bakery at 93-14 Liberty Ave., said he’s happy about the DOT’s decision to change it back to a two-way street, but he still hopes that the city agency will remove the barrier as well.

“It’s going to bring a little more traffic, but it’s not what we need and what we want,” Niaupari said of the DOT’s decision, which took effect on April 24.

He also said that the traffic barrier has only hurt the businesses near its location and hasn’t improved driver and pedestrian safety, which was the reason the DOT placed the barrier in that area.

Niaupari believes that a police camera or a cop put on that intersection would prevent accidents better than a barrier.

“Once you see a camera, you have to slow down,” he said.

Jimmy Jobah, a cashier at Fine Food Market & Deli grocery store, which is two doors down from the bakery, also approved of the DOT’s decision, saying that it’s going to be better for business now that you can travel in either direction on that street.

According to Jobah, when those street changes were originally made, business for the grocery store went down about 30-40 percent, and stayed down. He also hopes that the barrier will be removed because it will benefit both drivers and store owners to have that area open for cars.

Ulrich thanked the DOT for listening to the concerns of the residents in his district.
“DOT is making things right again,” he said. “Allowing two-way traffic along Liberty Avenue will boost small businesses there and offer drivers a more convenient commute in and around Ozone Park.”

Addabbo was also elated about the street change. He said that he applauded the city’s efforts to open that street up again, but he is still petitioning to get the barrier removed as well.

“The concerns of the small businesses in the vicinity have been partly addressed, but I believe will not be fully addressed until Liberty Avenue is totally opened to traffic, once again,” he said.

Addabbo is an advocate for the barrier removal because of the effect it has had on the small business owners since its inception in 2010.

Betty Braton, Chairwoman of Community Board 10, said that she was pleased the DOT fulfilled the board’s request for a change without affecting the safety measures made to that area.