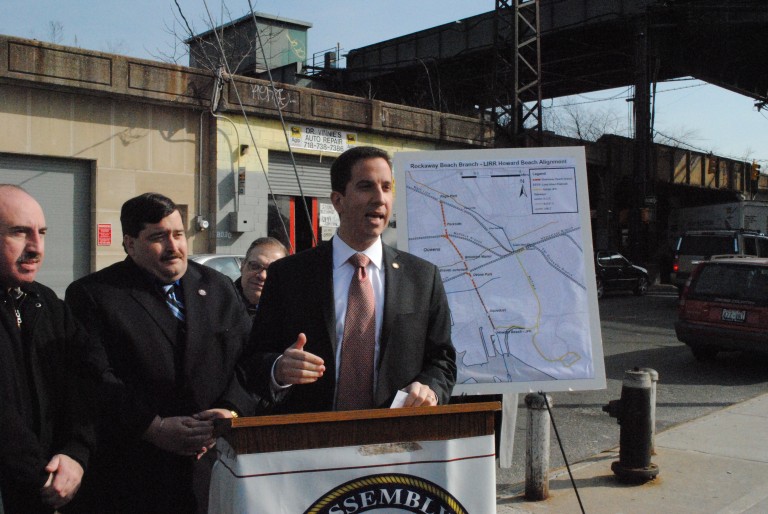 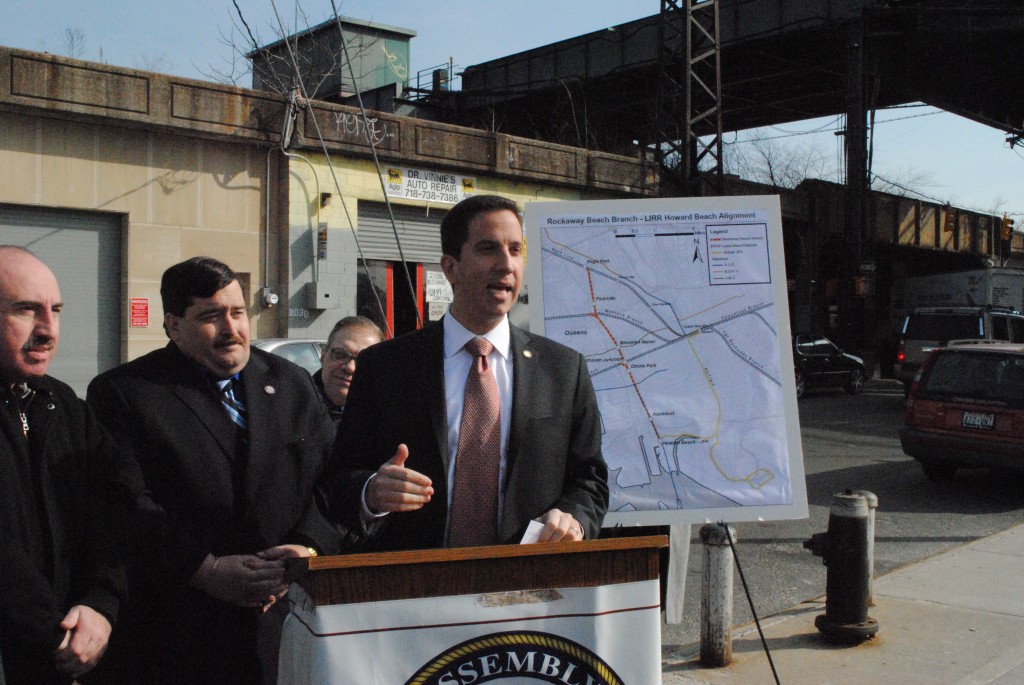 Assemblyman Goldfeder held a press conference in February to advocate reactivating the Rockaway Beach Rail Line. He says the collapse of the convention center, which it would have served, doesn’t change his goal. File photo.

Gov. Andrew Cuomo’s failed bid to build a convention center in Ozone Park will undeniably affect the area’s future development, but the collapse of the major plan hasn’t changed the fight about one related redevelopment project.

The plans to reactivate the Rockaway Beach Rail Line from Rego Park to the Rockaways or turn the long defunct track into a Highline-style greenway are still competing.

Assemblyman Phil Goldfeder (D-Ozone Park) was outspokenly disappointed when the convention center plan fell through, and he’s been one of the loudest advocates for reactivating the line that cuts through his district.

On Tuesday, he said losing the nation’s largest convention center right along the tracks is a blow to the argument to reactivate it.

The deteriorating tracks run directly by the Aqueduct racino in Ozone Park where the center was proposed, and the area is currently served by only the A subway line.

But Goldfeder said he’s full steam on the idea.

“We’ve lost one reason, but we’ve still got so many more,” he said. “As far as I’m concerned, nothing has changed.”

He said there are plenty of other reasons to reactivate the line, including giving Rockaway residents a quicker commute to midtown Manhattan.

At least one more thing has changed though. There is more opposition rising up from communities on the north end of the line.

Councilwoman Karen Koslowitz (D-Forest Hills) said last month that it would be unfair to reactivate the train, which runs directly behind some Rego Park and Forest Hills residents’ backyards.

Tuesday, Goldfeder dismissed that concern, too.

It’s NIMBYism [Not In My Back Yard] at it’s worst,” he said. “Most of their arguments are flawed, and the truth is you don’t balance the needs of a few families who are afraid of a little noise verses the economic development of our entire borough.”

Before some Forest Hills and Rego Park residents objected to the train’s reactivation, Goldfeder’s most outspoken opponent was a group dedicated to turning the old track into a greenway called the QueensWay—meant to mirror Manhattan’s High Line.

They too are still pushing their plan. The group says the announcement and subsequent implosion of the convention center development didn’t affect the QueensWay at all.

The biggest impact of the convention center collapse may be the availability of money for redevelopment.

Genting, a Malaysian gambling company, was negotiating with Cuomo and had planned to inject $4 billion into the mega-development.

Although none of that money was ever committed to reactivating the track or the QueensWay, Goldfeder had floated the idea that Genting could foot the bill.
On Tuesday though, he shifted his focus toward the possibility of using public funds to cover the costs.

“There’s no better government investment than the restoration of the Rockaway Railline,” he said. He added there’s no way to tell who would pay for the project at this point.

There’s currently no price on the table as a proposal has yet to be developed.
The Queens Civic Congress will host a forum on Monday, June 18 to discuss the ideas on the table for the railway.