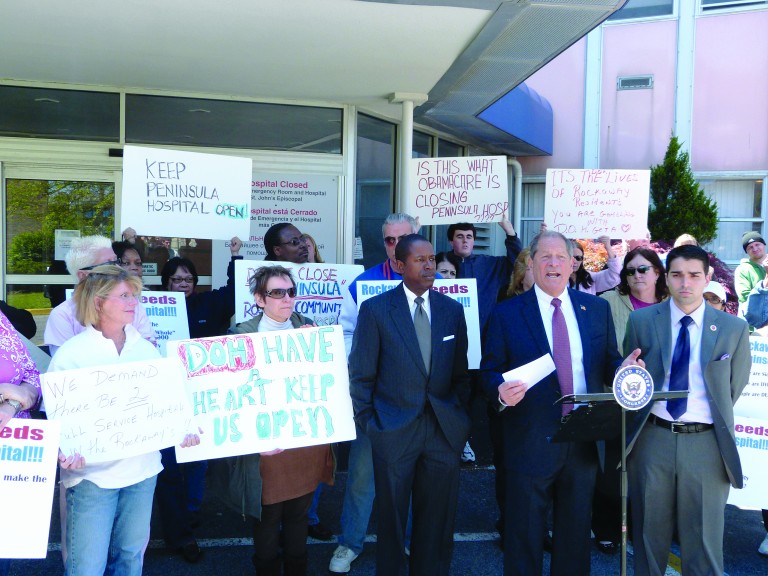 In the spring, residents and local politicians protested the closure of Peninsula Hospital in the Rockaways. It was the fourth hospital to close in Queens within the last five years. File photo.

As the dust settles and politicians continue to fervently voice both their opposition and support of the Supreme’s Court 5-4 decision to uphold the Patient Protection and Affordable Care Act last Thursday, Queens is left to reflect on how the historic legislation will play out locally.

With the determination barely a week old, many are mystified about the ruling’s impact and if it can help Queens’ struggling health care system.

Marshall has been a leading voice in Queens, calling for a way to revamp the area’s struggling hospital system, but she says her office will have to wait and see what will become of the most recent upheaval.

“It’s going to take time to be developed and implemented,” Rosa said. “It’s hard to take a federal paradigm and fit it to the local level.”

Perhaps the most contentious outcome of the court’s decision was that to back the individual mandate, which requires all citizens to obtain health insurance by 2014 or pay a fine.

Due to the uncertain lifeline of the mandate and other provisions of the order—like the forced expansion of Medicaid by states in order to keep federal funding, which was struck down by the court—all levels of government are still determining how to navigate the forthcoming requirements of the law .

Rosa said because of this, the QBP’s office is currently unable to advise anyone of insurance options. “As we move forward to 2014 and full implementation, we’ll know more, but until then, we just don’t know,” she said.

Plagued with high number of uninsured and record hospital closings, Queens has long been in need of improvements in health care.

In 2006, Borough President Marshall issued a report on her office’s “Vision for a Comprehensive and Sustainable Healthcare Delivery System,” in which they disclose that 33 percent of the population in northern and western Queens lives without insurance.

Furthermore, 2006 U.S. Census data shows that Queens overall has the highest uninsured rate in the city for those under 65, at about 20 percent of the population.

As Rosa points out, both reports were issued prior to the closure of four local hospitals within the last five years, which has has likely further aggravated an overburdened system.

But it is unclear if either issue will be relieved by the Affordable Care Act.  Remaining hospitals are still sifting through the law themselves.

Medisys, the company that runs Jamaica and Flushing Hospital, two care facilities that have absorbed patients from the closures, said they plan on issuing a statement in the future, but repeated the argument that more time was needed to make sense of the law’s impact.

The NYC Health and Hospitals Corporation, which oversees Elmhurst and Queens Hospital Center, were also unable to prepare a statement by press time.

Another unresolved concern is how undocumented residents will fit into the picture.
“The legislation does not address how hospitals that are not getting paid [to care for undocumented patients] will continue to not get paid,” said Rosa, who calls Queen’ immigrant demographic ‘unique’.

According to the QBP’s office, more than 45 percent of Queens’ population is foreign-born. Although, that figure does not account for undocumented residents, whose population is almost impossible to accurately track.

Undocumented workers are also a driving force in Queens’ large informal economy, according to business leaders in the borough.

“I know of a few immigrant doctors and dentists who are licensed in their countries, but not here. They illegally provide services for cash, and they probably won’t change a thing,” said Rob MacKay, director of public relations at the Queens Economic Development Corporation (QEDC).

“Nobody really knows how it will play out, and unfortunately, I don’t have a crystal ball. My worry is that small business owners will be hurt by possible taxes and penalties,” said MacKay. But he remains hopeful, “President Obama promised his bill would create options for small businesses to purchase quality and inexpensive health insurance. I really hope he is right.”

According to MacKay, Queens has almost exactly 45,000 businesses, but the vast majority—with the emphasis on vast—employ fewer than 10 workers.

These businesses would remain exempt under the new law that only requires employers with more than 50 employees to provide health insurance or face a penalty tax.

The QEDC provides one-on-one counseling to hundreds of small business owners each year and will now be adapting their business training courses to include information on how to comply with new regulations.

However, MacKay said that so far they have not received any phone calls with questions and cannot predict if individual owners will opt to pay the penalty or provide insurance.

“Plus, a healthy workforce is a productive workforce, and every good boss wants his/her employees to have the best insurance,” MacKay added.

“Over two years ago, President Obama and Democrats in Congress took on the longstanding challenge of improving our nation’s health care system. We worked to put an end to runaway premium increases and arbitrary coverage denials, to improve and strengthen Medicare, and to create options for individuals and small businesses to purchase quality and affordable insurance. I am pleased that today, our hard work was validated.” – Rep. Joe Crowley (D-Queens)

“Today’s decision simply means that the fight to repeal ObamaCare, and to lower all other taxes, rests with the elected representatives of the people, not with the Court. It is critically important now, more than ever, to elect Mitt Romney as President, and to elect U.S. Senators and members of Congress who will repeal and replace ObamaCare.” – Republican Candidate for U.S. Senate Wendy Long

“… The Supreme Court’s ruling does not change the fact that it is still a very bad law. Congress has already found many mandates in ObamaCare that would hurt small businesses and kill jobs.” – Rep. Bob Turner (R-Queens)

“Today’s historic decision … ensures that approximately 1 million New York City residents without health insurance will no longer have to choose between buying the medication they need and paying the rent.” – New York City Comptroller John Liu

“Now that the Supreme Court has recognized the right to universal access to affordable health care, it is time for the extreme right to drop their attacks and start working constructively to help meet the law’s principal objectives – providing all Americans with access to the best health care in the world, while bringing down the costs of our health care system.” –  City Council Speaker Christine Quinn

“Thanks to the leadership of President Obama and his administration, particularly Secretary Sebelius, the Affordable Care Act will provide access to health care to millions of Americans nationwide and more than one million New Yorkers, and I am pleased the Supreme Court upheld this law. We will continue to move forward with implementing the health exchange that will lower coverage costs for New York’s businesses and help ensure that uninsured New Yorkers have access to health care.” — Gov. Andrew Cuomo

“I am pleased the Supreme Court reaffirmed the hard fought progress that was made to ensure that no one can be denied coverage for a pre-existing condition, being a woman will no longer be a pre-existing condition, young adults will be covered, prescription drug costs for seniors will be reduced, preventive care including life-saving mammograms will be accessible and that insurance companies can’t cancel their coverage when you get sick.” – U.S. Senator Kirsten Gillibrand