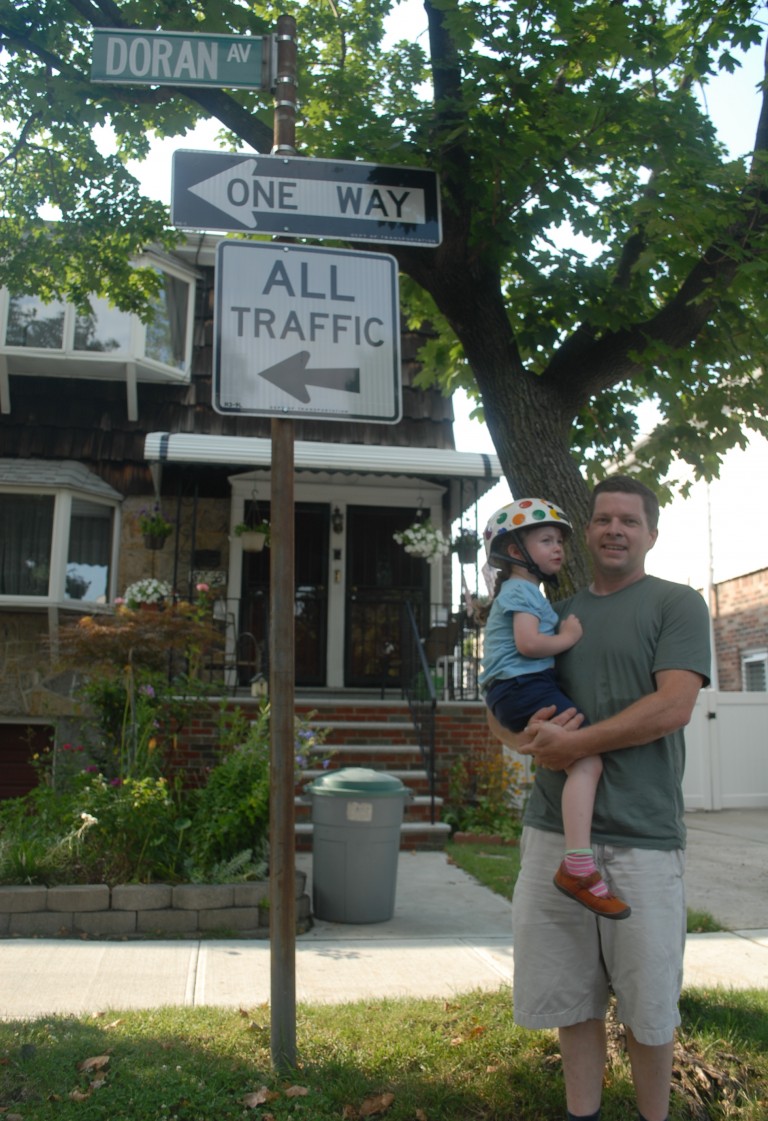 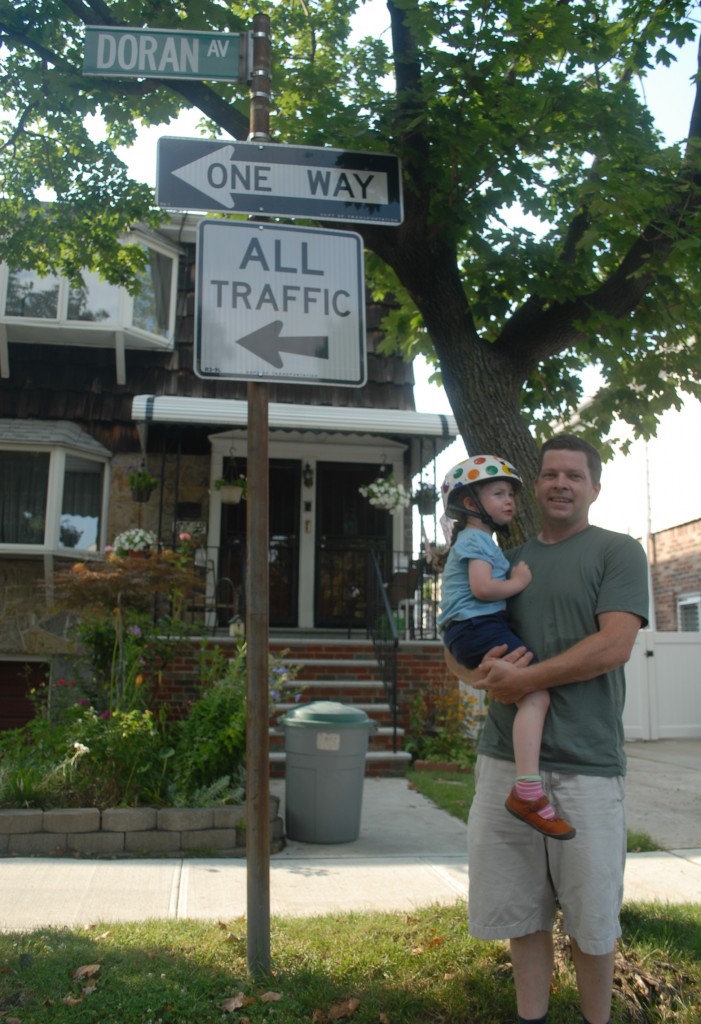 Toby Bloch argues that the one-way changes to Doran Avenue will only shift more traffic to his street where his daughter plays and he bikes. Forum Newsgroup photo by Jeremiah Dobruck. 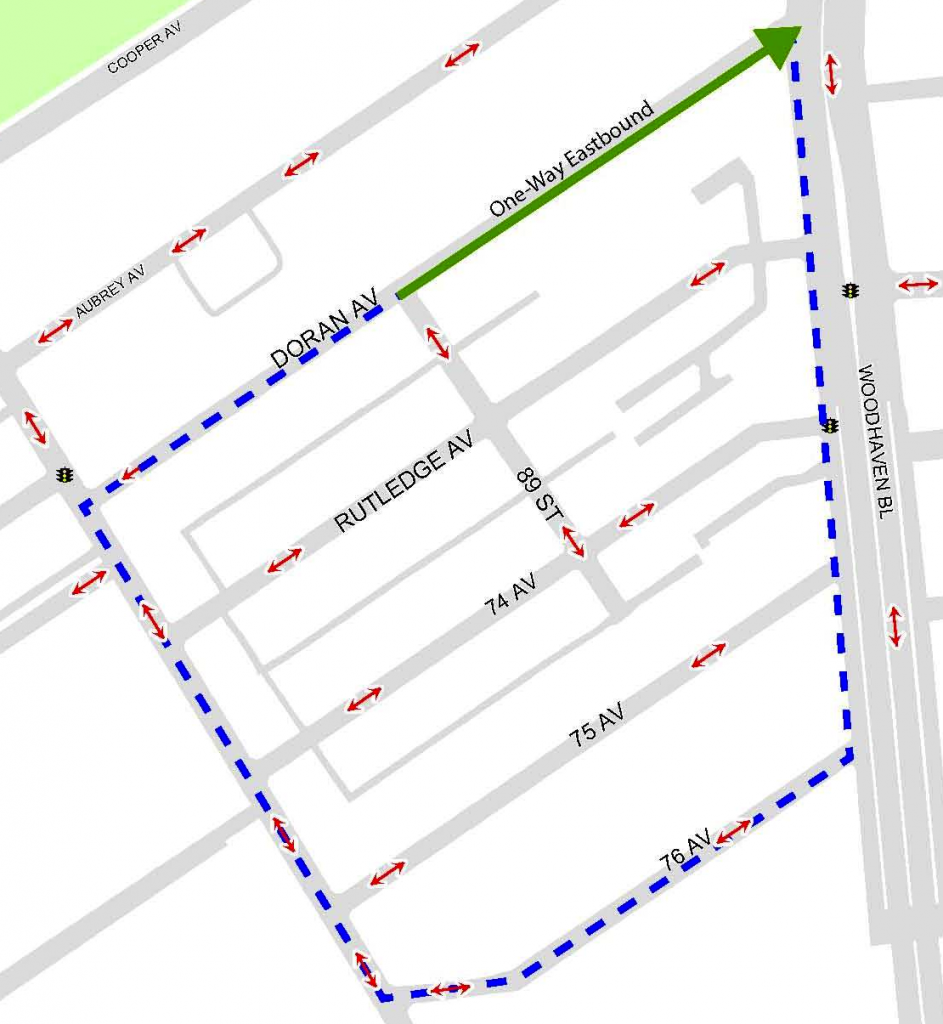 For years, residents on Doran and Rutledge avenues in Glendale have asked the Department of Transportation (DOT) for a way to stop drivers making a quick right off of Woodhaven Boulevard and speeding through their residential neighborhood to another nearby thoroughfare.

This makes the two streets a quick cut-through for anyone trying to avoid backed-up traffic on Woodhaven.

After requests last year from Councilwoman Elizabeth Crowley and Community Board 5, the DOT thinks it’s come up with a solution, but some residents say it’s just pushing the problems onto other nearby streets.

Doran Avenue is a one-way westbound street, letting cars turn off Woodhaven and zoom down it.

In a study completely last year, the DOT said there’s no way to install speed humps on the street because there are too many curb cuts.

They also can’t put a stop sign between the two blocks because there isn’t enough traffic volume on the street to meet the requirements.

The DOT’s solution is to reverse the one-way direction of Doran midway through the street at 89th Street.

Between 89th Street and Woodhaven, Doran would become one-way eastbound. But between 88th Street and 89th Street, Doran will be one-way westbound.
It’s an out-of-the-box solution that will stop cars turning onto Doran from Woodhaven. The problem, one resident says, is that there’s nothing to stop cars from turning off Woodhaven and speeding down Rutledge—the very next street.

“All the streets in the area all have problems with traffic cutting through and going too fast,” said Toby Bloch, who lives on Rutledge Avenue.

He thinks that when drivers learn they can’t cut off of Woodhaven Boulevard onto Doran, they’ll just start doing it on the next block—his block.

“It seems unfair to address problems on one block by just shifting it to their neighbors,” he said.

He’s circulated a petition against the proposed change and said he has 50 to 60 signatures so far.

He argues that the DOT needs to take the affected area of five short streets as a whole.

“They’ve come up with a solution that only benefits one block,” he said. “It’s really a little unbelievable.”

The DOT maintains, however, that this is the first step in a longer-term plan.
If the proposal goes through, studies can be done on Rutledge, 74th and 75th avenues—the next three streets along Woodhaven where impatient drivers can cut through.

More options, including speed humps, could be viable there.

“These streets do not possess the curb cut/driveway limitations of Doran Avenue,” the DOT’s report states.

The plan will go before Community Board 5, which will make a recommendation to the department before there is a final decision.