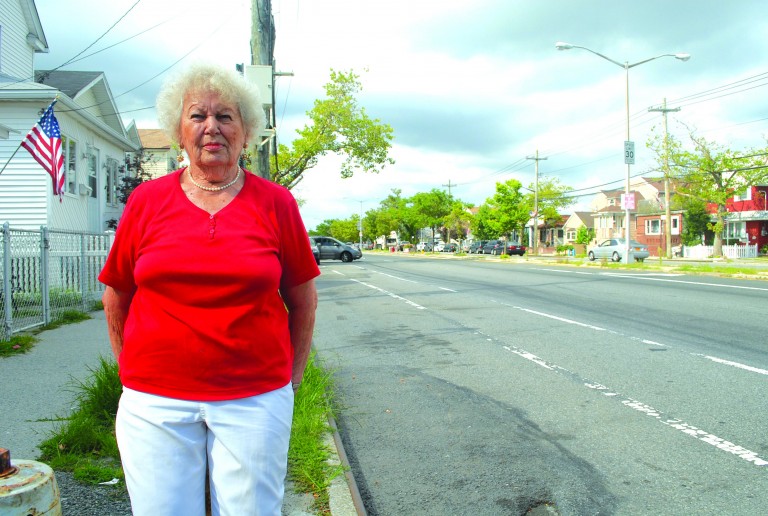 Across the street from Muriel Stemmann’s house on Cross Bay Boulevard in Broad Channel, a funeral parlor’s sign reads, “You may linger, but it will get you in the end.”

That is exactly how the 90-year-old, spunky, lifetime bus rider said she felt after the Q21 bus route she had relied on for 76 years stopped picking her up at 16th Road.

“I cannot get anywhere with the route change. I have to take two or three buses. I cannot get to the Howard Beach Senior Center. I cannot go to church. All I can do is cry,” said Stemmann with a little laugh, maintaining a sense of humor about a situation that would drive others into angry tirades.

Stemmann, a life-long resident of Broad Channel, has never taken to driving so when the Metropolitan Transporation Authority (MTA) shortened the Q21 bus service as of July 1, they unknowingly crippled Stemmann’s mobility.

The elderly woman says she has been most devastated by her inability to reach her church on 101st Street in Ozone Park.

She said she has seen a lot route changes over the past 70 years, but this is the first time she has been unable to cope.

“I’m the only one. Everyone I used to take the bus with has died. If it was a group, they might do something.”

The stranded woman took to letter writing to see if she could convince anyone to help her. She sent requests to local newspapers and elected officials.

“I even wrote to the President,” laughed Stemmann.

City Council Member, Eric Ulrich’s office said they received a letter from Stemmann and in response sent a letter to the MTA last week requesting the return of a bus route with more local stops.

“She is not the first one to contact the office,” said Rudy Giuliani, Ulrich’s Chief of Staff. “She is right that there are not many local buses. Everyone is having a problem with it.”

The MTA said in a statement, “The role of the Q21 diminished in importance due to its much slower and less frequent service. It carried very few customers.”

The city agency has been drawing a lot of heat recently from communities all over Queens for its long-list of July service changes. Residents along 109th Avenue in South Ozone Park are still battling the organization to revert Q41 services back along 111th Avenue.

For now, Stemmann isn’t sure if anyone will take notice of her predicament, or if she’ll ever be able to attend church again.

“I don’t think it will ever happen,” she said. “But you cannot kill someone for trying.”