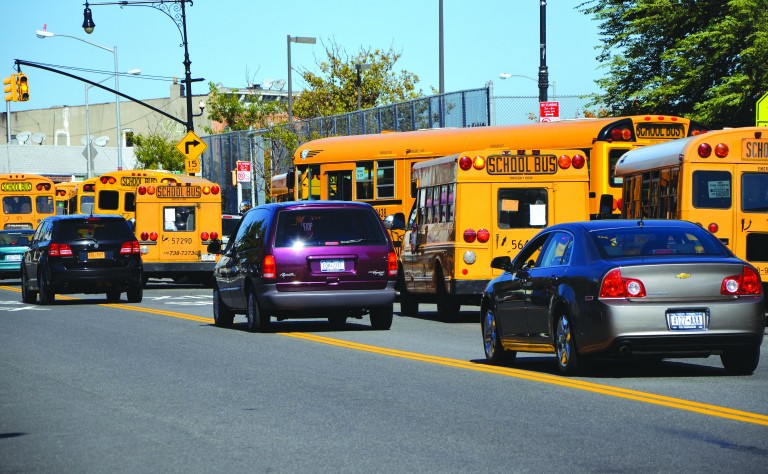 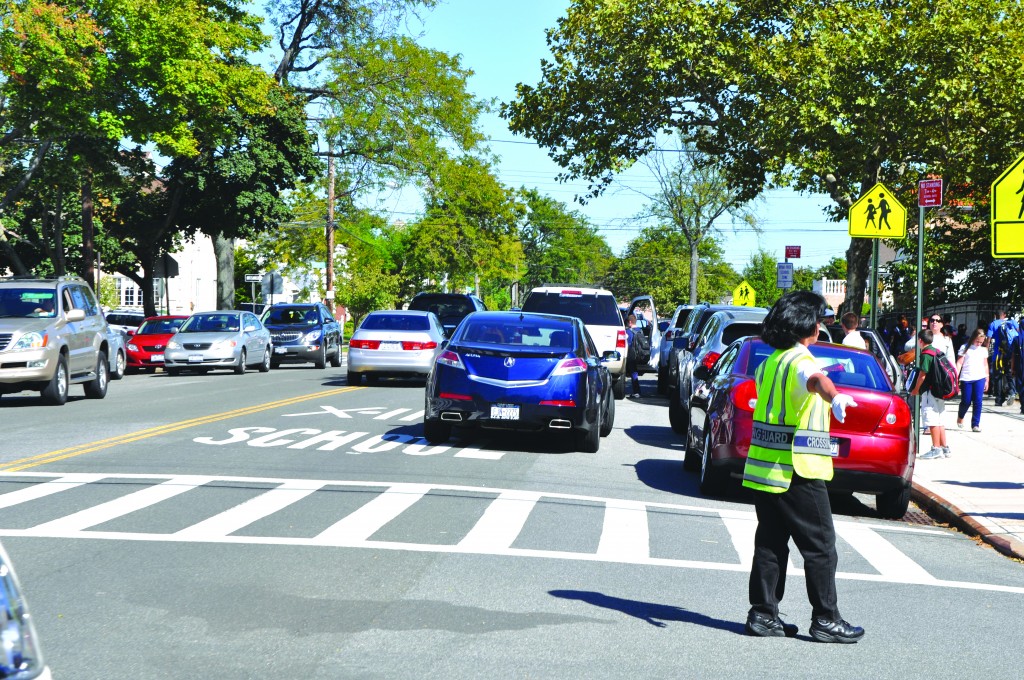 Triple parked cars are a commonplace occurrence outside PS 146 in Howard Beach. Other area school report the same problems and anxiety has been mounting among parents since the school year began last month. Forum Newsgroup photos by Luis Gronda.

While Queens students may have adjusted to their new classes and teachers a month into the school year, motorists navigating through the triple parked school buses and hoards of children during dismissal continue to complain about traffic jams and congested sidewalks.

In Howard Beach, the streets around PS 146 on 159th Avenue fill up quickly as students are let out around 2:30 each afternoon. The same problems exist at nearby MS 207 in Rockwood Park and MS 232 in Lindenwood. And in Maspeth, three schools stuffed into four blocks – including a newly constructed high school – has residents and Civic leaders concerned over the congestion caused from dismissing thousands of children all around the same time.

John Farinaccio, a Howard Beach resident for 16 years, said that taking his six-year-old daughter to PS 146 each morning is a constant danger as parents arriving late block fire hydrants and park in crosswalks.

“They park anywhere where they can get daylight,” Farinaccio said. He added that it’s dangerous for people because drivers will be unable to see a pedestrian if the crosswalk is blocked. “Plus what if you have a little kid that tries to dart out,” he asked. “They don’t stop at stop signs in this neighborhood anyway.”

And the problem only remained during dismissal.

Marisa Napolitano said that she doesn’t feel comfortable letting her 12-year-old son cross between 98th street and 97th street as traffic backs up on the blocks surrounding the school.

She is also concerned about the illegal parking on the slope on the side of the school between 98 street and 97 street. She said that sometimes they park too close to the gate parallel to the cars, leaving little room for pedestrians. Other parents fear that a child will get hurt from those cars one day.

“This shouldn’t be happening,” Napolitano said. “God forbid they hit the wrong pedal.”

There’s a no parking sign for that area – Monday through Friday from 7 am to 4 p.m.

A crossing guard outside PS 146 said that parents have complained to the school’s principal about the hectic dismissal time, where blocked 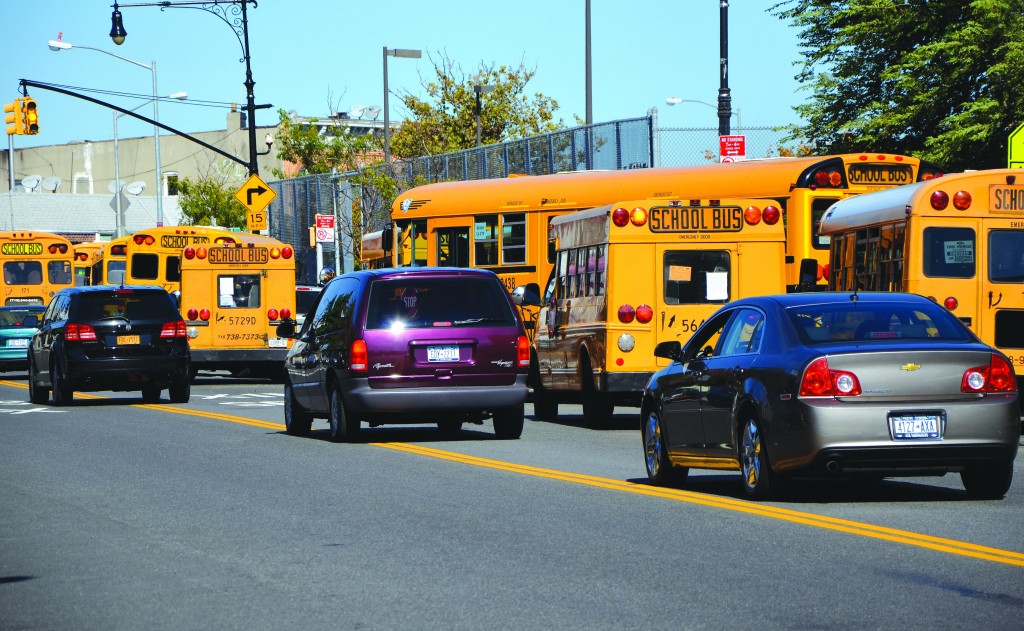 School busses are double and triple parked outside PS 58 in Maspeth are flanked by cars of parents picking up children at PS 58 in Maspeth. The vehicles then empty out onto Grand Avenue creating what residents feel is an extremely unsafe environment for pedestrians and students. Forum Newsgroup photo by Ryan Lavis.

She also expressed concerns over parents parking on the slope, noting that a kid was almost hit by a car two years ago. She said that parents ignore the no parking sign on that slope, which lasts till 4 p.m.

James McKeon, Principal at PS 146, said that the traffic around his school is not a major problem, but did acknowledge it can build up during dismissal. He said that the school has asked parents to leave their cars at home and walk their kids from school, a request that has been mostly ignored. He also said that it’s not the school’s job to enforce traffic rules, and that they can only ask the parents not to park in certain places.

In Maspeth, members of the Juniper Civic Association were vocal against the proposed site of Maspeth High School just blocks away from PS 58 and IS 73. The High School rests along 74th Street and 57th Avenue, with PS 58 on the nearby Grand Avenue, and IS 73 running along 54th Avenue. But despite their protests, the new Maspeth High School was opened this past September.

“It was a major disaster on opening day,” said Manny Caruana, an executive board member of the JPCA who has rallied for a better solution to dismissal traffic. He said that parents and buses had triple parked in front of the school along 58th Avenue, making the road impassable.

“The city doesn’t care about its residents. They weren’t there to see the havoc that was caused from building that school.”
Robert Holden, President of the JPCA said that the worst trouble spot surrounds PS 58, where yellow school buses triple park along the stretch of Grand Avenue that the school occupies.

“It’s worse around 58. You just have an overcrowding in the area,” Holden said. “If I wanted to live in Manhattan, I’d live in Manhattan. But I chose to stay here. We’re slowly losing what we had here.”

One crossing guard outside of PS 58, who wished to remain anonymous, said that people complain to her constantly about the congestion outside the school. But she maintained that within 45 minutes, the kids were usually dismissed and traffic returned to normal.

“Anytime there’s a little bit of traffic backed up people are going to complain,” she said. “But I really don’t notice that big of a problem. The kids have to get home somehow.”

But Holden said this is only the tip of the iceberg when it comes to overcrowding in the area.

Currently, Maspeth High School only has freshman and sophomore classes, with juniors and seniors to be included over the next few years. That influx would bring the population up to about 1,100 – something Holden said would only worsen the problem.
“Things are going to get progressively worse in the area,” Holden said.

Holden said he hopes these signs will discourage parents from double parking in these areas, which blocks traffic routes for residents and LIE traffic spill off.

But despite current complaints and future worries, Maspeth High School Principal Khurshid Abdul-Mutakabbir said that he has run a quick dismissal from opening day. Every afternoon, he and other school administrators stand outside directing traffic and children in a timely fashion.

“We’re out here making sure these kids are dismissed as quickly as possible. It has run smoothly since day one, and we haven’t had any complaints.”

By Ryan Lavis and Luis Gronda