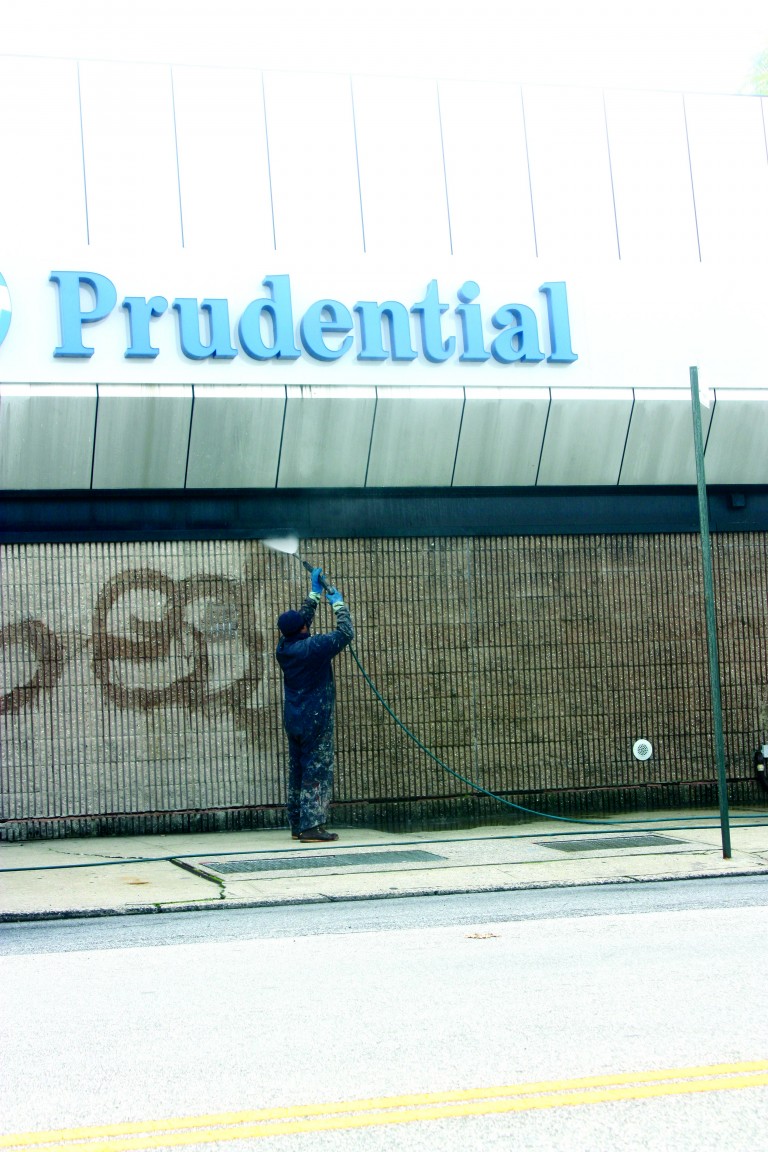 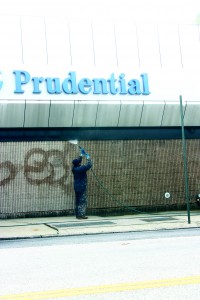 One of the crew from City Solve Graffiti Specialists applies the finishing touches in removing the tags of graffiti vandals that struck the Medical Arts Center Building in Lindenwood last week. Forum Newsgroup photo by Patricia Adams

Lindenwood residents were pleased to see the remnants of a graffiti attack in their neighborhood last week obliterated on Monday morning.

City Solve, a company hired by Ulrich when he began his zero tolerance graffiti initiative in 2009, handled the removal of the extensive tagging found on the façade of the Medical Arts Center on 151st Avenue in Lindenwood.

Bruce Pienky, owner of City Solve, says that the surface provided for a more difficult removal than usual because of the very porous composition of the stone used on the face of the building. One of his technicians applied chemical to the surface and let it soak in before using a high capacity power washer to strip the tags from the building.

When the scrawling was first discovered, Dr. Napolitano immediately decided to seek expert opinion about having the building treated with a substance to make future removals easier. But, Pienky told Napolitano that the procedure to coat the building was very expensive and advised against the expenditure, citing the fact that the location does not have chronic problems and that this was likely a random occurrence.

Dr. Napolitano countered with the fact that he takes great pride in the neighborhood his practice has called home for over 30 years. “While I appreciate Bruce’s gesture to try and save me some money, I consider this my home. It’s something I want to protect and keep the way people are used to having it kept,” Napolitano said. “So we’re going to move forward with by taking preventative steps. The money is not an issue—keeping the community the way it is now, that’s the issue.”

And so despite advice from Pienky, Dr. Napolitano has decided to proceed with having the building coated with a special anti-graffiti sealer. The product is roughly $100 per gallon and the building is estimated to require about 12 gallons to complete the job in addition to substantial labor costs.

Pienky said that he has handled over 500 separate complaint requests since beginning with the Councilman’s initiative but admits that this one was much more excessive than others. “Under usual circumstances, a building this size would only have about 10-20% of its face tagged,” he said. He went on to say that he has learned the best way to combat graffiti is to do rapid removal. “The quicker you get rid of graffiti, the least likely it is to go up again. The taggers watch it and they know the people that are not going to tolerate it, then they move on.”

Councilman Ulrich paid a visit to the site as the crew was finishing up the removal to meet with Pienky, Dr. Napolitano and co-chair of the Lindenwood Alliance, Renate Teuschler. “The Lindenwood Alliance has already made a big difference in their community and this is further proof of that. I was glad to work with them to get this done. It could not have been done without their support.”

Ulrich went on to commend Dr. Napolitano for going above and beyond as a property owner. “This is the type of community interaction that keeps our neighborhoods intact and makes my job a lot easier, more effective and certainly more rewarding to do.”