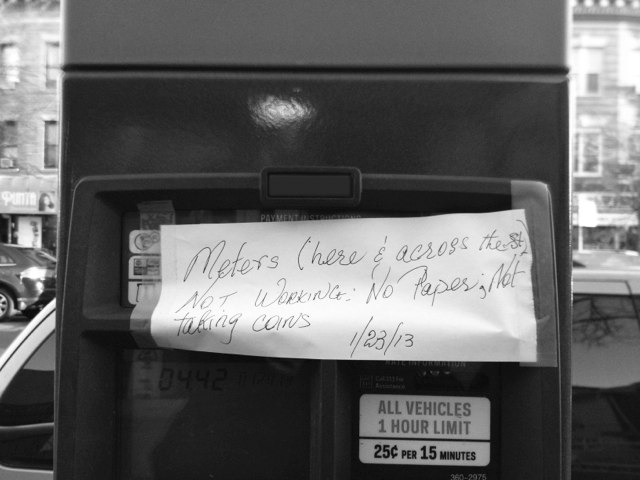 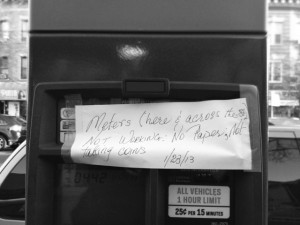 A sign on a muni-meter reporting a lack of receipt and improper time is a common practice now be exercised by motorists tying to warn each other of inadequacies in the system and to alert traffic agents in the hopes of fending off summonses.

Drivers in Queens have long had to contend with the often frustrating tasks of hunting down a legal parking spot and then timing errands just right so as to avoid the unnecessary expense of a parking ticket.

But, a recent spate of problems with the city’s updated Muni-Meters has Queens’ residents and politicians alike longing for the old days when single-space meters dominated the streetscape.

Recent complaints include meters not giving paper receipts and running fast, thereby cheating drivers out of time and money.

The newer Muni-Meters, which now proliferate in Queens and citywide since last year when the Bloomberg administration completed the replacement of nearly 99 percent of the older meters, differ in that they control multiple parking spots and require motorists to pay for time and then place a paper receipt in the vehicle’s windshield.

According to the city, these new Muni-Meters give motorists more parking spaces than the old meters.

The older meters controlled only a single space and accepted only quarters.

City Council member Karen Koslowitz (D-Forest Hills), whose district includes Forest Hills, Rego Park and Kew Gardens, said that some of the complaints she’s been hearing include people not getting their receipts after they pay a meter and then losing credit cards in the meters when making payments.

“I heard one story of a person, who came across a broken meter on the North side of Queens Blvd., and was told by a 311 information operator to cross Queens Blvd. and then use another, working meter,” Koslowitz said.

“Crossing Queens Blvd. is very dangerous and you shouldn’t have to cross if you don’t need to.”

Muni meters introduced by the city were installed with the promise of making life more convenient to the city's parking public, now many claim they are making parking, and life, an unfair misery.

According to Nicholas Mosquera, a spokesperson for the city’s Department of Transportation, “All meters are routinely inspected and at any time more than 99 percent of the meters in the city are operational.”

Mosquera advised individuals to pay at the closest nearby meter and contact 311 to report any malfunctioning meters.

“We will initiate new inspections following the receipt of any such requests.”

A Middle Village resident, who didn’t want his name used, said that among his chief complaints were meters that wouldn’t take quarters or credit cards and also displayed the incorrect time of day.

“Often,” said the man, “by the time someone finds another meter that is working, they’ll get ticketed.”

According to the city, traffic agents are instructed to give people a five-minute grace period to either go to the meter and pay or to find an alternate meter in the event one is broken.

John Perricone, a Ridgewood resident and also a member of the 104th Precinct Community Council, said he hadn’t heard of too many problems but said he had some run-ins himself with some misfiring meters.

“I ran into a problematic muni-meter on Grand Avenue in Maspeth,” Perricone recalled. “There were two meters, located on both sides of the avenue that did not take coins.”

Koslowitz also recalled a recent story where she was visited by a reporter who parked near her office in Forest Hills and was cheated out of 15 minutes.

“With these meters, you can’t put a bag over them if they’re not working. You need a sack.”

“Part of the problem,” Koslowitz admitted, “is that the city wants to give out tickets.”

“The truth of the matter is, I’m getting more complaints in the last couple of weeks than ever before,” Koslowitz noted.

She speculated that possibly now, with 99 percent of the borough having the new Muni-Meters, “people are starting to have problems.”

The Council member added that she is in the process of compiling the meter complaints and then plans to contact the DOT to see what can be done.