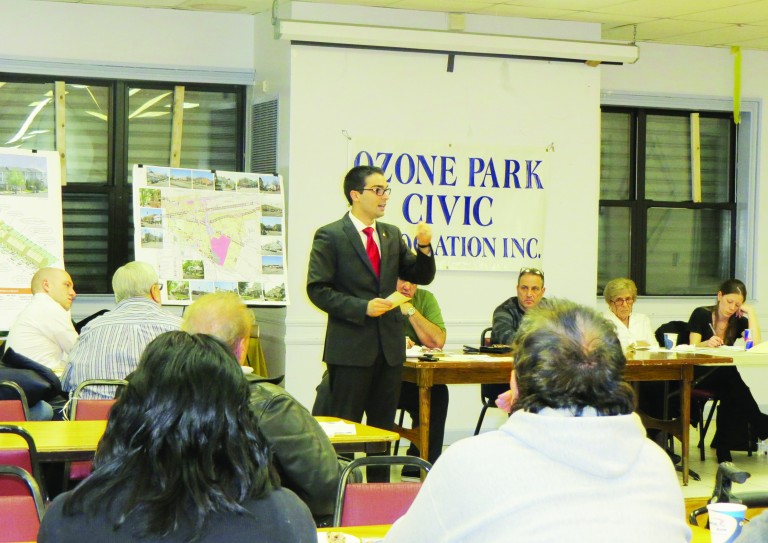 Councilman Eric Ulrich confirmed the news that Ozone Park residents have been waiting to hear for more than three decades—the city will begin construction on the capital project known as HWQ411B in March of 2014.

Tell a Centreville resident that the city will soon launch a sewer and roadway construction project first proposed more than three decades ago, and it is not unlikely they will scoff – loudly – and say their final demise is expected sooner than the city making good on its plan.

“This is ongoing since the 1980s – every time they tell me they’re going to be digging, it’s like the story of the boy who cried wolf,” Ozone Park Civic Association President Howard Kamph said of the HWQ411B construction project. “I’ve been here since 1982, and my neighbor told me then to not bother doing the sidewalks because we’ll be getting new sidewalks, streets, everything. That hasn’t happened, and most of my neighbors said they’re going to be dead before this happens.”

But, Kamph said residents may soon be whistling a new tune – not to mention live to see the completion of the $45 million, three-year project, which would include the replacement of streets, sidewalks, curbs, pedestrian ramps, water mains, and sanitary sewers, as well as the installment of new storm drains in the Centreville area. According to a Feb. 27 email from the city Department of Design and Construction to Kamph, the city said it expects to break ground on the now infamous project in February or March of 2014.

The project is slated to occur in the area included in 135th Avenue and Linden Boulevard South to Albert Road and North Conduit Avenue, and bounded by Cross Bay Boulevard to the west and the railroad right-of-way along the Aqueduct Racetrack to the east.

“Please be advised that the final design for this project is nearing completing, and we anticipate completing the design in early spring 2013,” the DDC representative wrote in the email to Kamph. “Thereafter, the construction contract will be bid in summer.”

First announcing plans for the project in the early 1980s, the city has since “given excuses all the way down the road” as to why it could not begin, including a lack of funds and difficulty acquiring property, Kamph said. Ultimately, the city had to use eminent domain to acquire some property, such as sidewalks. No houses were taken as part of the eminent domain process, and the city said it expects to pay owners for the property used in the project around November 2013 to February 2014.

While this February is not the first time Kamph has received a letter from the city stating plans to begin construction – the city Department of Transportation said in a 2009 letter, for example, that roadway construction was to begin in 2011 – the civic leader says he has reason to believe the project may actually happen this time around – and Councilman Eric Ulrich (R-Ozone Park) said he has the DDC “commissioner’s word” that Centreville residents will see the plan finally executed.

The councilman told residents gathered at the Ozone Park Civic Association meeting Tuesday night that the project was most recently stalled because the environmental review process took three years, instead of the one and a half that was expected.

He also noted that the project will boost the worth of area homes.

“If you are thinking about selling your home, don’t do it now,” Ulrich said. “The housing market stinks, and we don’t want you to leave Ozone Park anyway. There are a lot of great things happening in the community, but after this project is completed, there is no doubt in my mind that the property values in Centreville will skyrocket.”

By Anna Gustafson
Patricia Adams contributed to this article.