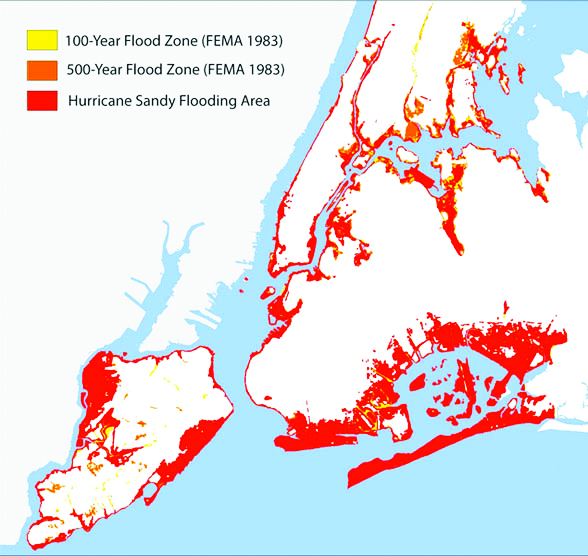 When FEMA released Advisory Base Flood Elevation maps (ABFE)  for many hard hit areas of Queens, after Sandy, it did so with the accompaniment of a laundry list of other factors that spelled further disaster to those already struck by the wrath of Sandy.

But late last week, some speculate as a result of widespread verbal public uprisings across the country, an announcement that FEMA would now introduce a revision to those revisions, as well as maps in other regions, was released.

Last week we announced to you that this newspaper would be taking steps toward the possible organization of a body of representatives from our immediate affected areas, including the Rockaways, Broad Channel and all of Howard Beach. Included in that body and along with our pooled resources would be those of The Wave newspaper of Rockaway and it’s editor, Kevin Boyle.  Boyle recently made an appearance on New York 1 at their invitation to review the situation and the steps he and his newspaper have already taken. This week we will try to provide a synopsis of this new and crucial development and will also continue in preparing for future steps we may need to take.

A Congressional advisory was released last week, to talk about changes to the ABFE that FEMA says are the result of continued scientific and technical research . The review conducted resulted in an identification of reduced risks in the areas marked in the maps.

Now FEMA is incorporating new data into the computation and the new base elevations. Homeowners will now be made aware of changes that will likely result in the reduction of elevation and mitigation requirements. The changes are scheduled to be released in  phases beginning in mid-May. At the time , FEMA will begin the formal process of working with communities to adopt new standards. Following the release, there will be a formal appeals

process which allows for a 90-day opportunity for data to be provided, which could lead to additional changes before the map is finalized.

The picture painted by the new maps represents what can be viewed as a great sigh of relief to homeowners and business owners. Along with the elevation reductions comes  the great reduction in the potential of the insurance premiums and the necessary mitigation.

The mitigations to include former requirements to perform house raisings that could potentially run up to $100,000 in total and in some cases even more. Now that many areas are being moved from V Zones—properties that have a one percent chance of flooding in any year as well as having to face hazards associated with coastal storm waves, to A zones, which have no risk of coastal storm waves.

The new parameters would not require the exorbitant premiums, which before had the potential to reach $10,000 or more for some homeowners. As promised we will keep you informed of the upcoming developments as they arise.

Proposed Changes to the maps for Queens:

Edgemere: Significant V to A zone changes. V12 to A10 (included in the Arverne map that FEMA created but should be called out separately)