A Bronx man has been convicted of the May 2011 kidnaping and murder of a 33-year-old Flushing man as well as  the kidnapping of the victim’s 80-year-old mother during a home invasion and robbery. 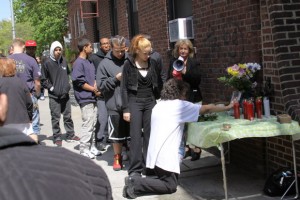 Community residents, friends and organizers at Community Prevention Alternative’s held a memorial service for Flushing neighbor Thomas Shanis after he was killed in his Flushing home nearly two years ago.

According to trial testimony, on May 3, 2011, the victim, Thomas Shanis, 33, a reputed marijuana dealer, left his apartment located at 140-18 Ash Avenue in Flushing, to walk his dog, Sampson, a German shepherd/Labrador retriever mix. He inadvertently let Juan Mejia and his accomplice, Domingo Mateo, into the building. Once inside the building, Mejia and Mateo made their way to the sixth floor and waited in the stairwell to the roof – which was right next to the victim’s apartment door – for Shanis to return. Upon his return Mejia and Mateo attacked him in the hallway. During the struggle, Mejia pistol-whipped Shanis about the head and Mateo stabbed him in the back. The dog, Sampson, was also stabbed, suffering a deep wound to his neck, as Mejia and Mateo forced their way into the apartment Shanis’ mother Zelda was also living.

The two men bound the elderly woman with duct tape while her son, Thomas, was bound and left on the kitchen floor, where he bled to death.

Mejia and Mateo ransacked  Shanis’ bedroom and removed a metal box and other items. They also took money from Zelda Shanis.

He was already sentenced, on February 20, to an indeterminate sentence of 50 years to life in prison.