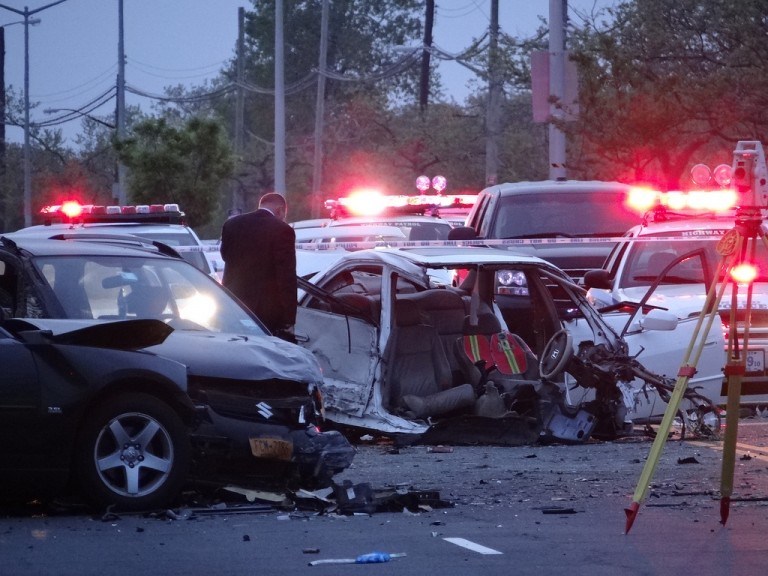 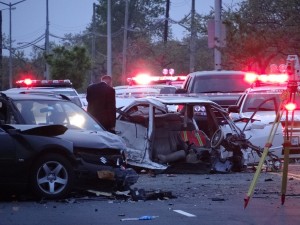 Gridlock nightmares faced by commuters across the city on a daily basis were no match for motorists attempting to get in or out of the tiny hamlet of Broad Channel last Friday night. The strip of Cross Bay Boulevard that connects the town with Howard Beach in the north and Rockaway in the south was shut down after a three car accident around 4:30 in the afternoon. And vehicles were not the only ones affected. Commuters who utilize the bus along Cross Bay were also affected with many were forced to walk home across the bridge and through the crash site.

Well known as a treacherous roadway, with a history of deadly crashes, the unfortunate scene didn’t come as a surprise to residents who have seen it before; time and time again.“This is like a bad routine,” said Ed O Hare, a lifelong Broad Channel resident. “When you’re close enough to hear it [the crash of cars], you’re not shocked.” And he says when you don’t hear it but you get the phone call that it happened, you just hope it’s no one you know and there are no kids involved.

For a little more than five hours starting around rush hour, the road was closed from the North Channel Bridge on the Howard Beach side, as police and emergency services vehicles made their way to the crash site. Ten people were taken to the hospital, two of them critically injured.

Police say the accident occurred when the driver of a Honda lost control of his vehicle on the northbound side of the roadway, and jumped the divider. The car then met head-on with two vehicles heading south bound, before splitting in half. 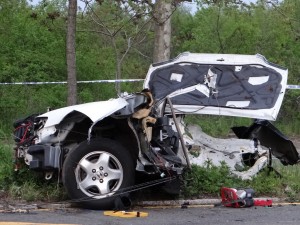 Emergency Medical Services (EMS) personnel told reporters at the scene that in addition to the two critical injuries, three people were in very serious condition and five others were taken to area hospitals to be treated for minor injuries. “It’s absolutely amazing that no one is dead from this,” said Ed Harris, a Rockaway commuter trapped in the sea of traffic. “I use this road to go back and forth to work every day,” the 43-year-old father of three told The Forum, “and it’s no exaggeration to say that although the speed limit on the sign is 30 mph, drivers have set their own speed limit. It starts around 75.”

The driver of the Honda, 17-year-old Gurdip Miltani of Ozone Park, was arrested and charged with reckless endangerment and speeding after authorities say he was driving in excess of 100 mph—allegedly with a donut tire replacing one of the normal size wheels on the car. “That tire is not designed to handle speeds above 40-50 mph,” said one crash investigator pointing to the wheel that was totally detached from the vehicle. “It’s absolutely astonishing that no one is dead here. In fact, it’s a miracle.”

The roadway was reopened sometime after 10:30 p.m.