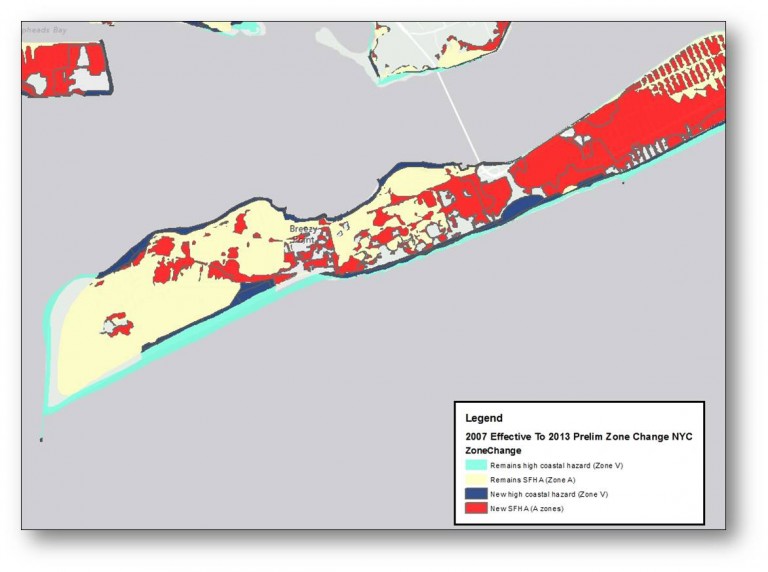 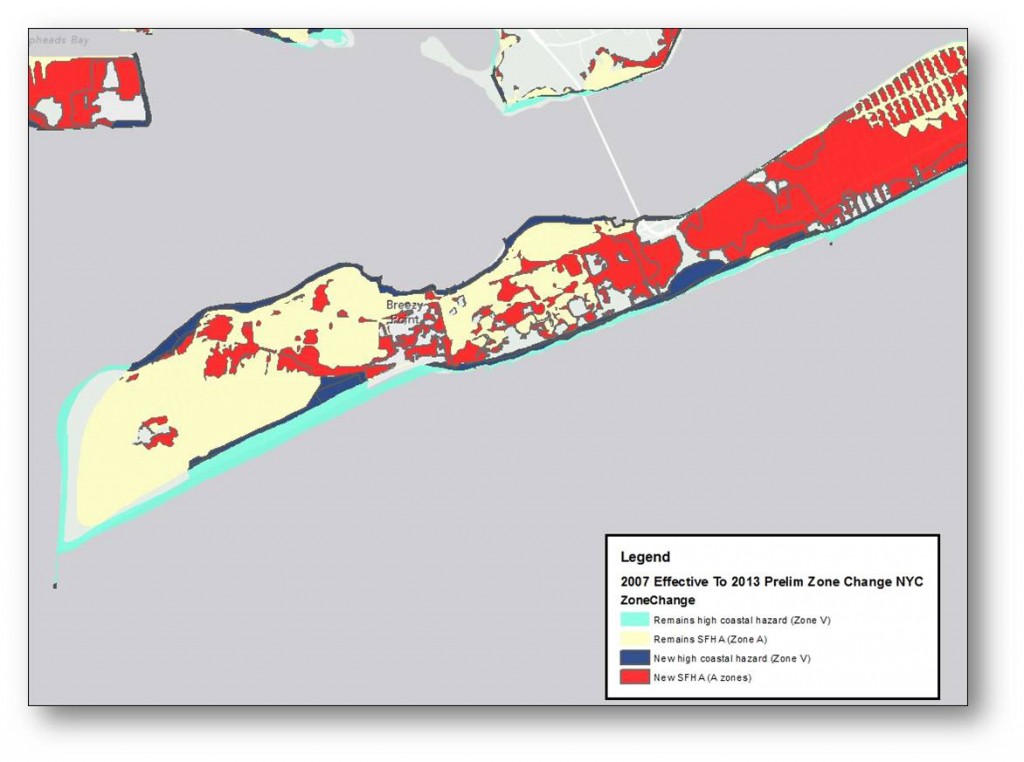 Revised flood maps released by FEMA on Monday place about 500 Queens homeowners - 200 more than in previous maps - in the worst zone - meaning they would have to elevate their homes and absorb higher flood insurance premiums. Photo Courtesy of FEMA.

While some South Queens residents breathed sighs of relief about the preliminary flood maps released by the Federal Emergency Management agency on Monday, they said the new documents are by no means a cure for what many worry will be devastating hikes in flood insurance rates.

The proposed federal maps released this week, which replace the previously released Advisory Base Flood Elevation maps that were rushed out right after Hurricane Sandy and still have a lengthy approval and appeal process to undergo before they are implemented and impact insurance rates, remove all of Broad Channel from what is known as flood zone V. Many residents in zone V would have to fork over significant amounts of money to raise their houses – which federal officials say is necessary to protect them in storms – as well as face increased insurance rates because they live in an area FEMA designates as the most prone to flooding. Instead, FEMA placed Broad Channel in the AE zone – which reduces the area’s base flood elevation – which would dictate by how much residents would be mandated to elevate their homes – from 15 to 10 feet.

“The bad news is that this revised flood zone designation, although welcome, is no panacea for the burdensome and extraordinarily expensive flood insurance regulations and rate increases contained in the Biggert-Waters Flood Insurance Reform Act of 2012,” West 12th Road Block Association President Peter Mahon wrote.

The Biggert-Waters legislation, approved by Congress last year, phases out some subsidized insurance rates and allows for rate increases of 20 to 25 percent a year until properties reach actuarial status. While supporters of the legislation have said it was meant to make a debt-ridden National Flood Insurance Program more fiscally stable, homeowners in Queens – and throughout the country – said the new rates would force many from their homes because they would no longer be able to afford to live there.

“This could be a town killer,” Mahon said. “This could turn Broad Channel into a community of foreclosed homes.”

While Broad Channel escapes being placed in the worst zone, parts of the Rockaways, including sections of Breezy Point and Rockaway Park, does not escape that fate – and, according to the proposed maps, 500 families – an increase of 200 families – are situated in areas where they would have to raise their homes and potentially shell out tens of thousands of dollars for flood insurance premiums.

Because of FEMA’s ongoing study of how many people are living in areas prone to flooding – which is expected to increase from about 218,000 in the 1983 New York City maps to about 400,000 in the most recent maps, Mayor Bloomberg on Tuesday outlined a proposal that he says will help to protect the city from future weather events.

“As bad as Sandy was, future storms could be even worse,” Bloomberg said during a press conference. “In fact, because of rising temperatures and sea levels, even a storm that’s not as large as Sandy could, down the road, be even more destructive.”

The proposal announced on Tuesday, a 430-page document, would cost about $20 billion, the mayor said, and would include such initiatives as fortifying infrastructure like the city’s power grid, to studying the feasibility of surge barriers across the mouth of Jamaica Bay.

Additionally, Bloomberg said he aims to have the city work with the U.S. Army Corps to construct a dune project along the Rockaway Peninsula. The mayor also proposed implementing bulkheads – which are typically made of stone and concrete and hold shorelines in place – in such places as Howard Beach and Broad Channel.

As part of the same initiative, the city would repair bulkheads on the Belt parkway that failed during Hurricane Sandy and repair and improve bulkheads from Beach 143rd Street to Beach 116th Street along Beach Channel Drive in Rockaway.